The Canon XF705: "A solid beast of a camera with important new technology" 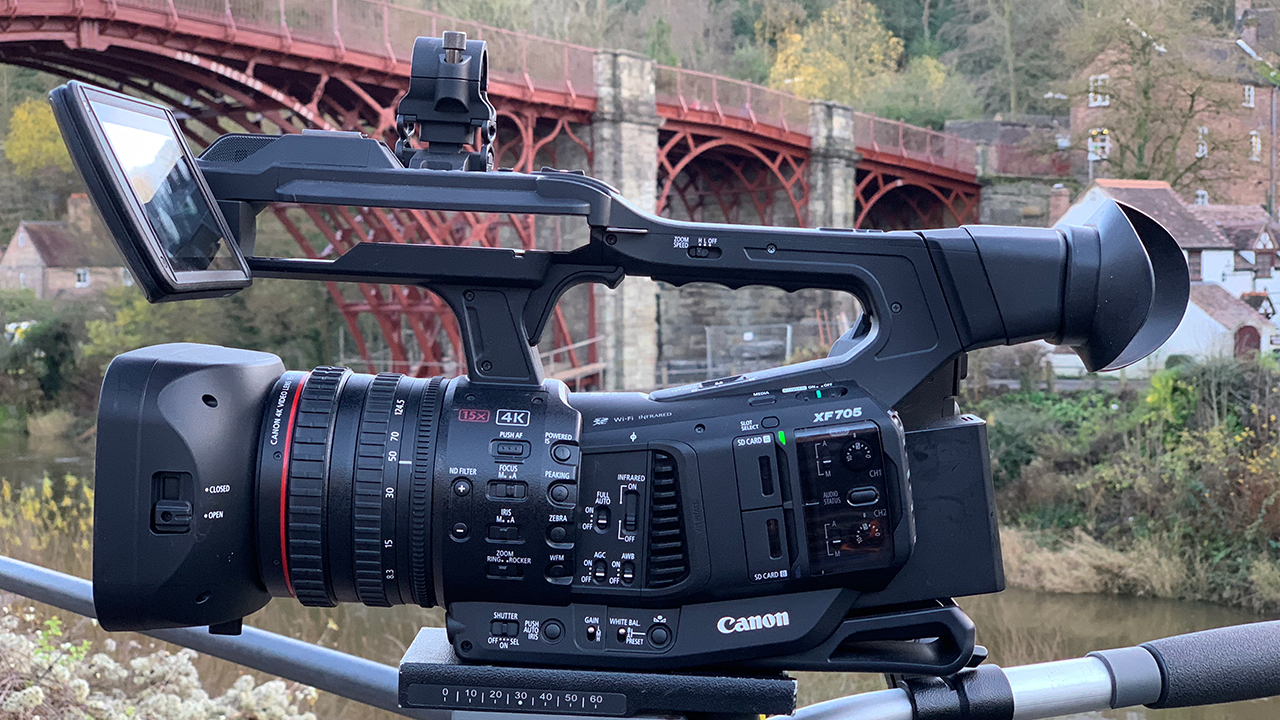 Review: In the first of a two part review we take a look at Canon's new flagship fixed lens camcorder, the 10-bit 4K XF705.

We’ve said it before on RedShark, and I’ll reiterate it here, the fixed lens camera is not dead. In fact it could be going through a bit of resurgence with a rather compelling number of choices available now. Such cameras are one of the workhorses of the industry. Reliable partners that will work on cue without any fuss. If you need a dependable bit of kit then an all in one solution is pretty difficult to beat on a day-to-day basis.

The Canon XF705 is one of the latest all-in-one camcorders, with one stand out feature in particular that sets it apart from the competition, a 1” CMOS chip. The advantages of such a configuration are plenty, including lower noise and better low light sensitivity over smaller chip rivals. Not to mention much better artistic control over depth of field.

One thing becomes extremely apparent when you first pick up the XF705. It’s a beast! I’m not used to saying such a thing about a fixed lens camcorder, but this one is an exception. No doubt much of its weight is down to the glass needed to make an 8.3-124.5mm lens for a 1” chip. To put this into perspective, that’s like having a 25.2-382.5mm lens on a 35mm camera. A huge amount of range in other words. The aperture isn’t constant, dropping to f/4.5 on the long end from f/2.8 at the wide, but this is a very small compromise to make for such an amount of zoom range.

The lens is controllable manually via three control rings. But bear in mind that despite the manual control the lens is still servo controlled, and the control rings, with the exception of the zoom control, are of the infinite rotating variety. 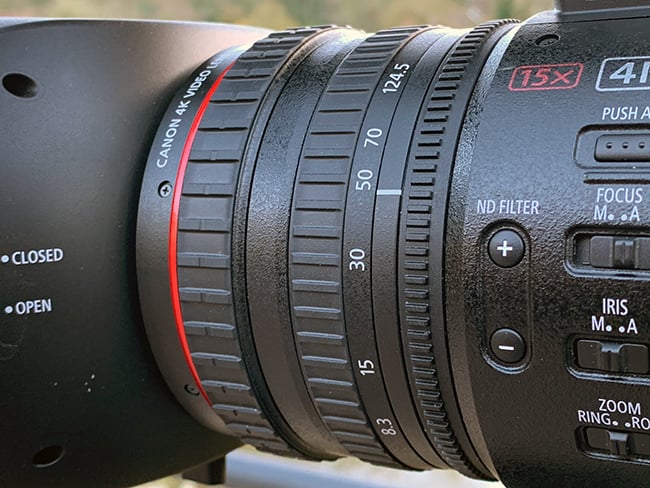 The rest of the camera is very assuredly built. Buttons are very clearly labelled and well spaced out. While the white balance and gain switches are fairly small, for the most part there shouldn’t be an issue operating the XF705 with all but the thickest of gloves on. There are lots of directly useful switches such as AGC on/off, infrared filter engagement, shutter adjustment, and other auto control toggles which save the need to go into menus.

ND filters are operated via electronic + and - buttons rather than with a mechanical link. This is no big deal in general but does mean in fast moving situations you will need to keep an eye on the information display so you know which filter you have engaged.

There are two ways to compose shots, a flip out LCD display and an OLED viewfinder at the rear of the camera. On a lot of cameras of this type flip out LCDs can be flimsy affairs that break easily thanks to the way a lot of clumsy fingered broadcast camera ops sometimes treat their gear. So it is reassuring to find that the LCD assembly on the XF705 is big, chunky, and seemingly very solid indeed. What's more, it can be flipped out to both sides of the camera.

On top of the chunky top handle just above the flip out LCD storage point are is a set of stereo mics, as well as playback and menu controls. Speaking of which, the menu system is fairly self explanatory. There is quite a bit of flipping between pages needed to find certain settings, since when you exit the menu it defaults back to another the custom menu when you enter it again. This custom menu is useful however since you can assign your most regularly used setting adjustments to it.

The handle itself has one hot shoe mount and one 1/4” screw hole for mounting other accessories such as monitors, cold shoes etc. 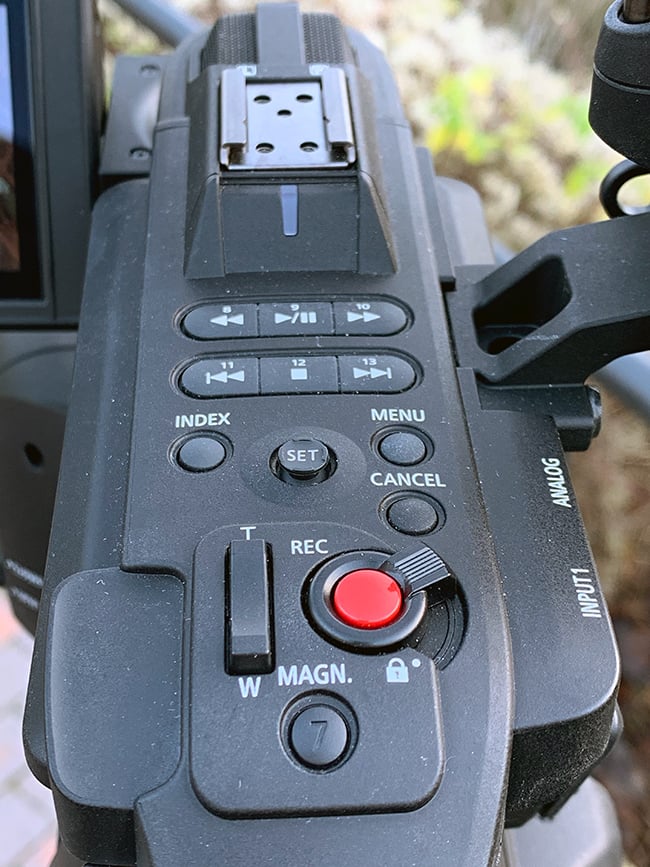 The side grip on the right hand side of the body is non-rotatable, which I think is a positive thing because it is one less thing to break. You always need to consider that these sorts of cameras are likely to encounter abuse when used for news gathering and journalistic purposes.

Recording wise the XF705 lays down footage to SD cards, primarily in HEVC (H.265) format. This means that your recording media costs are kept down, and the camera can record in 10-bit at up to 160Mbps at a very high quality in 4K. Transfer time again is important in a fast moving environment, and so HEVC is a very good choice for such a camera. This bitrate drops to 60Mbps in FHD, and down again to 30Mbps when the camera is set to 120fps FHD slow motion recording. But remember that in H.264 terms that former figure is more or less equivalent to 120Mbps. That’s pretty good considering that the EBU’s traditional recommendation back in the days of MPEG2 was 8-bit 50Mbps. We’ve come a long way! It should also be noted that is possible to record to HDR internally while outputting an SDR signal via SDI to an external recorder. This could come in very useful indeed. 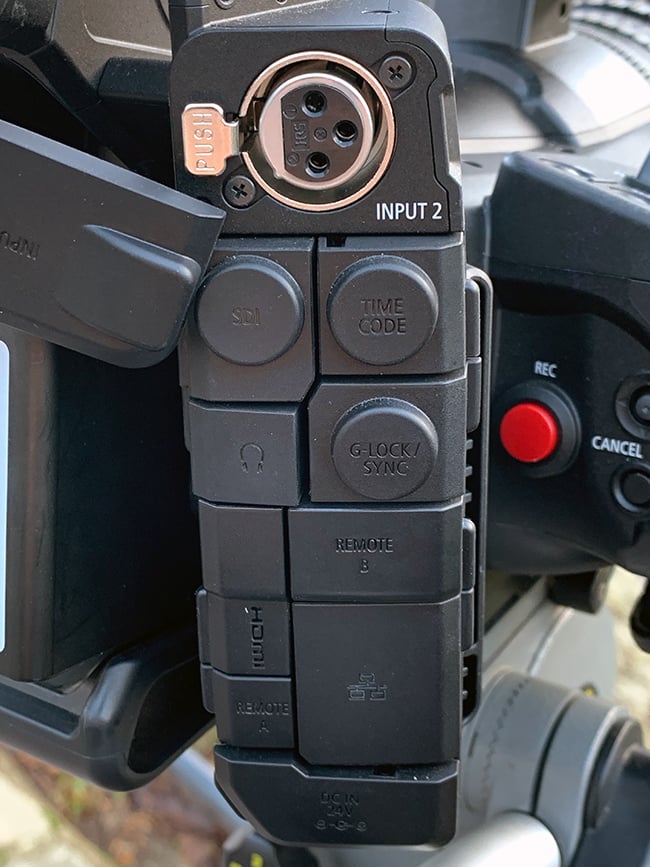 Audio options on the XF705 are very versatile. The camera will record four channels of audio (two stereo pairs). There are two XLR inputs for primary audio and then in addition you can take more channels through the 3.5mm mic input jack, or opt to use the stereo internal mic. Levels are controlled via familiar dials contained within a flip-out transparent door. No surprises here. Again a good thing because it means the controls are familiar to everyone. 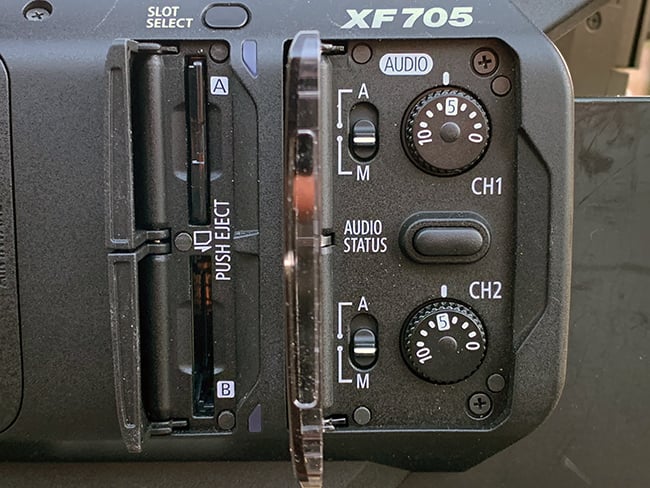 Connectivity on the rear of the camera is also extensive with SDI-out, timecode, genlock/sync, HDMI, two remote jacks, 3.5mm headphone, network, and 24v DC in.

Stay tuned for the next part of this review where I will tackle what the camera is like to use in practice, and of course the picture quality.

Read Part 2 of the review here.