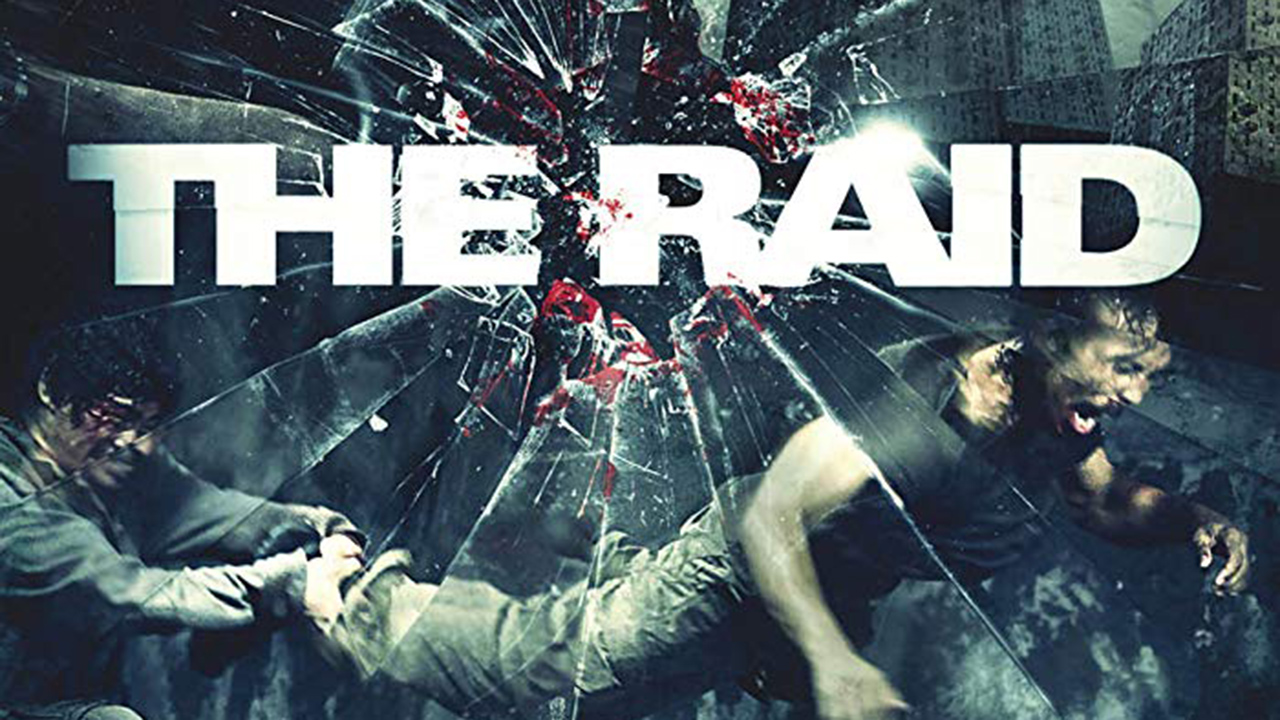 Replay: As if we need more proof that the camera you have access to isn't one of the main stumbling blocks to making a cinema worthy film any more, we take a look back at one of the best action movies of the last decade. And it was shot using a camera that pretty much anyone could buy. We are of course talking about Gareth Evans' The Raid: Redemption. 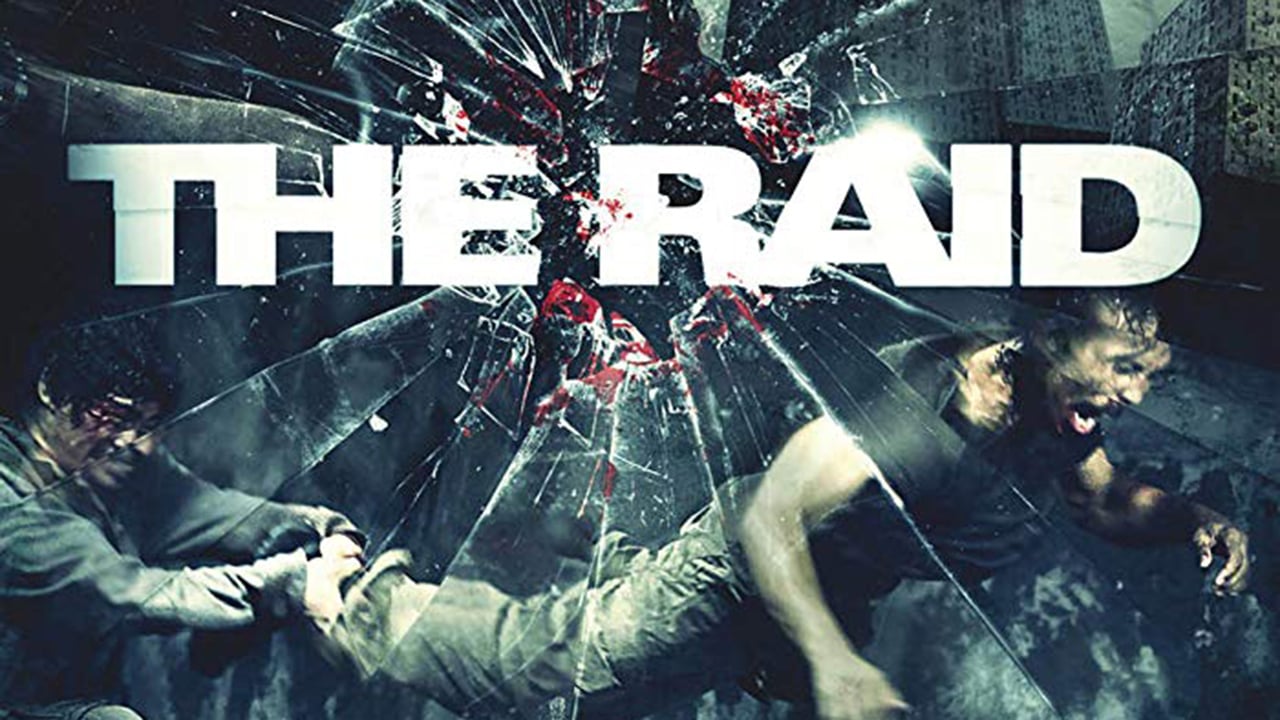 Last week I wrote about how George Lucas shot Star Wars Episode 2 on a camera that cost 80,000 times more than a camera you can buy now, yet is capable of a much superior picture. But while Star Wars used what was for the time, very high end HD cameras, the film I am going to focus on today was shot in 2011, and was shot using a camera that was within most peoples reach.

Indonesian action film, The Raid: Redemption was concieved of and directed by Welshman Gareth Evans with cinematography by Matt Flannery. It was a huge hit worldwide and effectively kick started an entire era of high quality Indonesian action, and it was shot on... a Panasonic AF101.

Evan's first action movie, Merantau, was a great start to things and it, too, received a wide release, both in Asian cinemas, and worldwide on DVD. This first effort, incredibly, was shot using a Panasonic HPX500 and a 35mm ground glass adaptor. Curiously The Raid: Redemption was in fact lower budget than Merantau, so in Evans' mind it felt like a step backwards. Yet The Raid went on to win plaudits all over the world and won multiple awards. 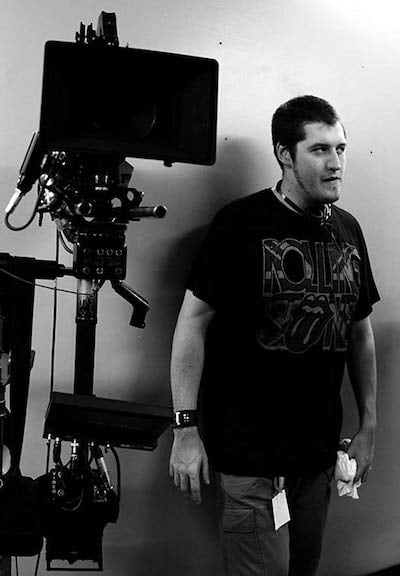 Gareth Evans on set for The Raid: Redemption with a Steadicam mounted AF100. Image: © 2012 - Sony Pictures Classics. All rights reserved.

In terms of HD cameras, even at the time of its release, the MFT based AF101 wasn't exactly heralded as the best camera in its price range. It recorded internally to an 8-bit format, and even through its SDI out the signal was still 8-bit, but you could get intraframe recording to an external recorder.

However, the AF101 does hold a few advantages. For a start different filmmaking primes can be adapted for it, and it is a very light camera indeed. Further the manageble file sizes meant that it was incredibly straightforward for Evans and his team to match the shots during fight scenes to their pre-vis sequences.

For those who are unfamiliar with asian style fight sequence shooting, things are done differently than they are, or at least used to be until very recently, in Western cinema. This all stems from the Hong Kong way of doing things where instead of taking a wide shot of the fight and then doing things again in medium and close up, the fights are segment shot. This way the fight is shot entirely in order, and both the movement being performed and the camera placement are tuned to compliment each other. 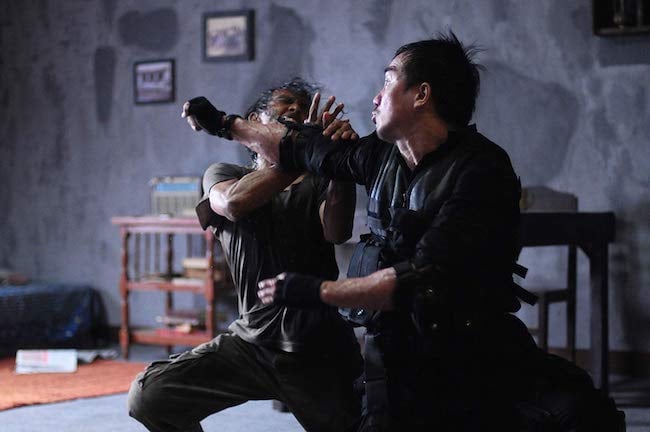 One of the many epic Silat based martial arts fights in The Raid: Redemption - Image: © 2011 - Sony Pictures Classics. All rights reserved.

This does of course throw up a few issues because you want to make sure that you have the shots you need and that they all flow together. Because Evans' and his team didn't have the decades of experience of their Hong Kong counterparts he devised a different system that would take advantage of the low cost digital production equipment that was available.

First they would create the fights in an office space. They both choreopgraphed and filmed the fights using all the shots they would need using a low cost handycam/palmcorder, and assembled and edited them onto a timeline within Final Cut Pro. Doing this meant that they could refine and tune the fight sequences, many of which were very long and highly complex, without worries of going over time or budget.

Then, once on location they would have the computer with FCP and the pre-vis timeline loaded onto it just outside the shooting location room. When filming for real took place they could offload the 'real' shots and replace the ones on the pre-vis timeline. This meant that they could see what was working well, and what they might need to modify, or even come up with slightly better ideas.

Segment shooting a fight sequence is time consuming at the best of times, but produces a much superior result when it comes to martial arts action. And although Evans' workflow meant things moved even slower to begin with, once they found their stride it apparently worked very well indeed, and it is partly thanks to the convenience of the relatively small file sizes that the AF101 produced to a Convergent Designs Nanoflash external recorder vs using something like a RED One (although the later Raid 2 was shot using RED Epic and RED Scarlet cameras). The Nanoflash recording to a 160Mbps Sony based I-Frame MPEG 2 codec.

And the rest, as they say, is history. The Raid: Redemption went on to receive worldwide critical acclaim as well as catapaulting Evans' career as a filmmaker.

All this goes to show that your passion for making a movie goes above all else, and that really, once again, it shows quite categorically that for all the pixel peeping that goes on these days, there are many things that can hold you back when trying to make a movie, but the camera choice available to you is not one of them.

The trailer for The Raid: Redemption can be seen below, and Evans' most recent work can be seen in the newly Netflix released Appostle, and he is currently working on a television series called Gangs of London, to be released next year.

I'd like to extend my thanks to Jude Poyer and Matt Flannery for some of the technical information within this article..