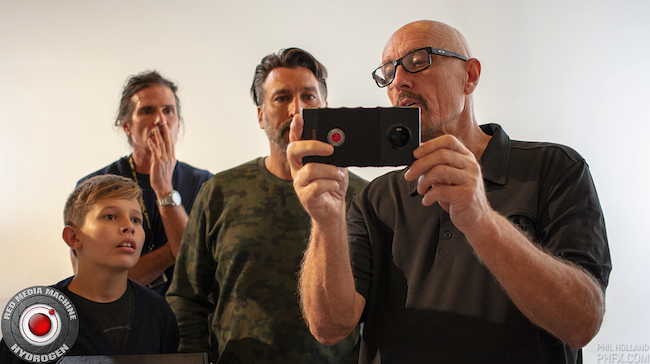 While the mainstream RED Hydrogen has been delayed until the Fall at the earliest, those that signed up for the ‘Houdini’ pre-release now have them in their hands — and some of them were put there personally by Jim Jannard.

So, August 31 seems to have been something of a red letter day for RED’s long-awaited but still slightly shrouded in mystery Hydrogen project. The select few who a) signed up for the Houdini pre-release version of the phone (a production sample of the black aluminium model with pre-release firmware and software) and b) were able to attend the launch event at RED Studios Hollywood on Friday, not only picked up their phones but were handed them in person by Jim Jannard, who then went on to sign as many boxes as he could.

First things first, this does not mean a load of H4V footage is going to spill out across the web while reviews appear thick and fast on the various tech sites. RED is controlling the Houdini release of the phone very careful and is essentially using it to widen the beta testing pool. “We reserve the right to brick the device if used for any purpose other than giving us constructive feedback,” Jannard has written. “If you are a vocal critic or reviewer, wait until after the launch.”

So, bar leaks and people not playing nicely, we’re still going to have to wait until preorders ship on October 9th and the phone’s carrier launch date (through AT&T, Verizon, and Telcel in Mexico) of November 2nd to find out a lot about how the Hydrogen One performs. That aside though, the launch event was something special and saw an ebullient Jannard reveal a lot about the phone that was previously under wraps.

DP Phil Holland is part of the Hydrogen team and provided a fairly comprehensive report of all that Jim said on the new h4Vuser.net site. To summarise:

Modules: A 2D Cinema Module is likely to drop around the main release date of the phone. The first official 5K+ sensor came from fabrication last week and “it is scary good, like really freaky good.” It will capture using a new REDCODE RAW LITE format and features interchangeable electronic lens mounts that can support “damn near every lens ever made.”

A dedicated H4V module is planned for even higher quality H4V content than the base spec phone can crank out, while a battery module will be folded into the cinema module as “Hydrogen One’s battery is large enough for pretty robust daily use.”

Development: More stuff is in the pipe. The Camera App, for instance, will feature RAW Still Format Support, H4V Bokeh Mode, and more. Additionally some editing features are also on their way for the RED Player.

Elsewhere, Jannard emphasised how this is only the start. While the Hydrogen One features a full ecosystem for shooting and displaying H4V and 2D content for both stills and motion, this will expand out to other tools that will provide even higher quality stills and motion.

Case in point, the new camera below. 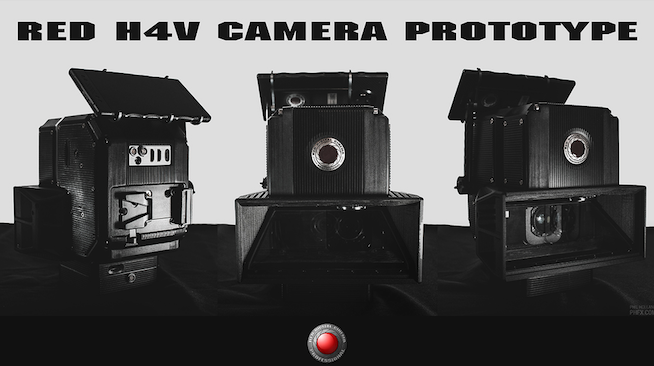 This is the first of two RED cameras designed specifically to film H4V content. This one features a beam splitter, is surprisingly light at 6lbs, and has been designed to film fairly close up objects, say to about 12 feet. The other model will be a side by side rig design for further away objects. Both feature zoom lenses, and look like they will record 4K H4V at 60fps on standard media, with monitoring via the Hydrogen One.

The spec is a moving one, but seems to be locked down enough that RED can talk about them being released around the same time as the carrier launch of the phone in November.

It’s a lot to digest and expect to see a bit more analysis about it all on RedShark soon. But for now, those with Hydrogen One pre-orders in the system can start to get genuinely excited about the technology they will hold in their hands in a mere few months. And for the rest of us, believers and skeptics alike, the journey that started a mere 14 months ago looks like it will soon reach a destination.