The 4K Blackmagic Pocket Cinema Camera, quite probably, changes everything! 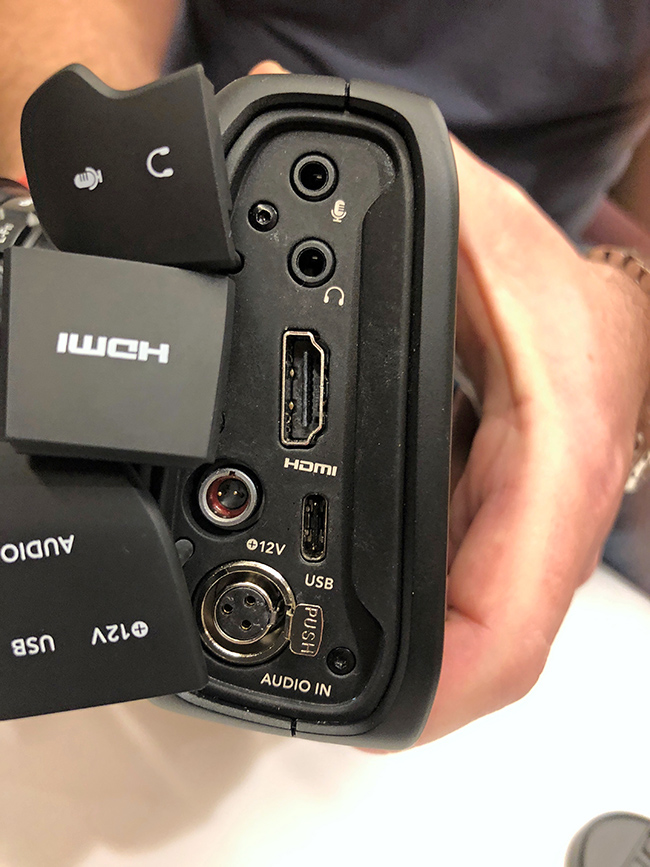 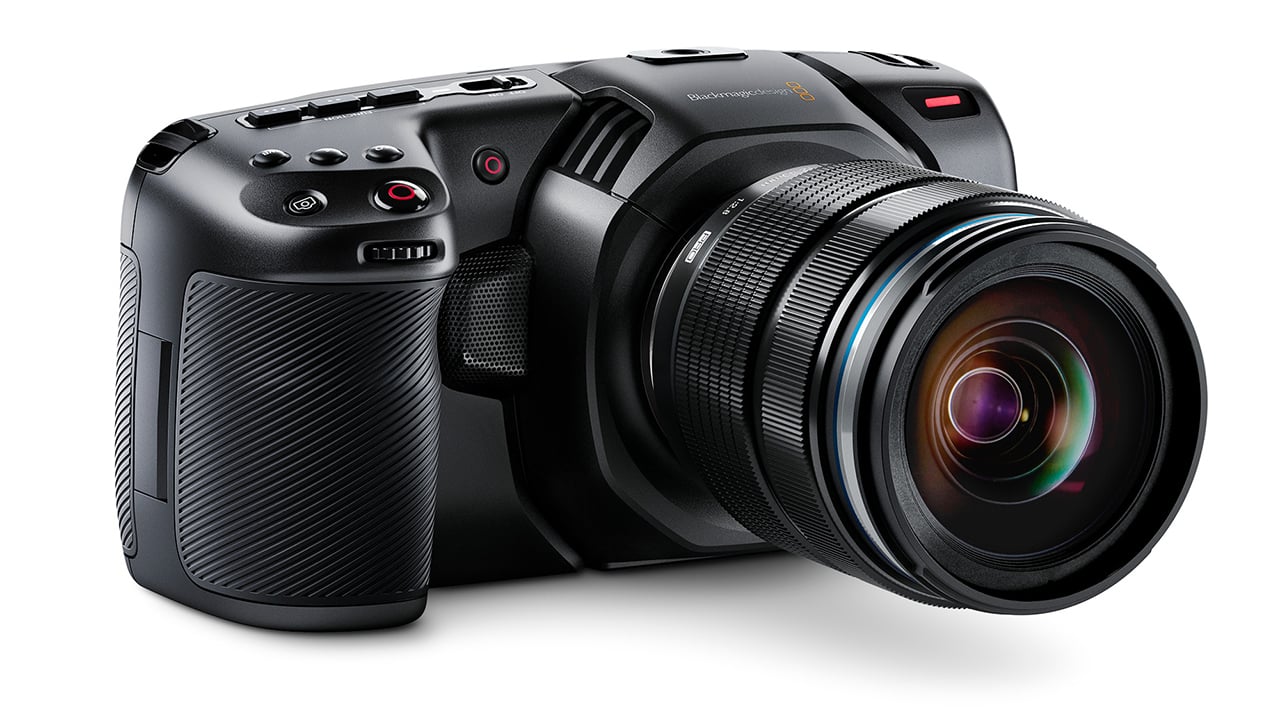 The Blackmagic Design 4K Pocket Cinema Camera is now, finally here, and it is almost as if you can hear the world rejoicing!

When you wish upon a star, sometimes, just sometimes something comes true. When Blackmagic Design teased a 4K follow up to the Pocket Cinema Camera on Friday it set the internet buzzing. And now we have the details. In short the new 4K Pocket Cinema Camera goes above and beyond expectations. The original camera caused waves. No doubt this camera will cause a tsunami!

Each time Blackmagic Design releases a new camera it just gets better and better. The Pocket Cinema Camera was one of the company's earliest models alongside the 2.5K Cinema Camera and later the 4K Production Camera. In fact it was one of the company's defining models. The Pocket is by far one of BMD's most popular ever cameras. And despite the fact that it has incredible capabilities for a camera of its price and size, it was always lacking three main features. High frame rates for slow motion, decent audio inputs, and importantly, 4K resolution. Higher framerates were sort of addressed with the 60P capable Micro Cinema Camera. But that was always a stop gap for Pocket owners who wanted to upgrade. It was never a true Pocket Cinema Camera replacement and it was limited to 1080p. 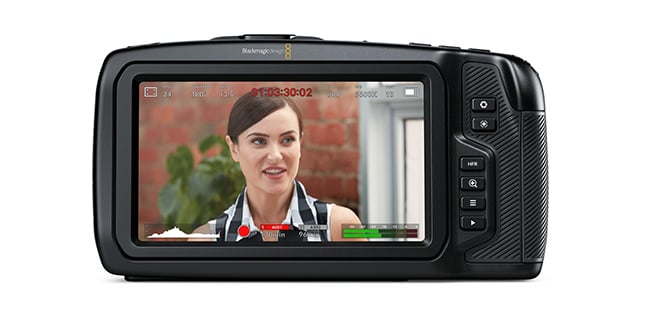 Well now the world finally has a true 4K Pocket Cinema Camera, and we can all breathe a sigh of relief! Even better is that the new camera benefits from all the lessons learnt over the years from previous models. Gone is the silver minimalist design of the original camera, instead replaced now by BMD's current all black, angular aesthetic. But it is the main features that grab the attention. Sit down and please don't be drinking a hot drink when you read this. 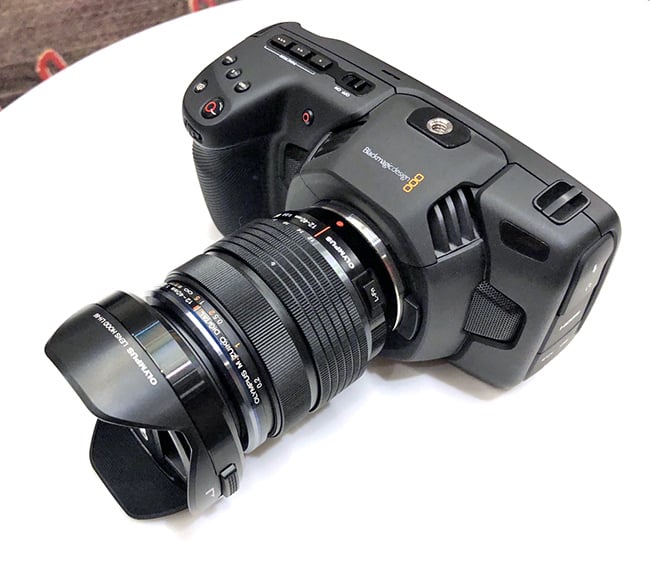 The 4K Pocket Cinema Camera uses an all new fibre reinforced polycarbonate based body design. Whilst it is noticeable larger than the original camera and looks very similar to many mirrorless camera bodies, it is still very light. The MFT mount is retained so that your glass investment is maintained. This is a full size MFT CMOS however, so the existing Metabones Speedbooster that was designed for the original camera won't work on this one. No doubt a new one will be produced, with the added benefit that it will be much easier to find a wide angle lens.

But all of this is by the by. Lets delve further into the detail. Dual ISO? Check. This is a huge thing. From the demos that we have seen this camera has incredibly low noise. Maximum ISO is 25,600. There is a new 5" touch screen display that is hugely improved over the original. And it will record internally to 12-bit raw DNG and 10-bit ProRes. Can it do ProRes RAW? No, not at this time. But we wouldn't rule out a firmware upgrade just yet. You might ask why this is the case. The answer is, well, industry. That's just the way the dice rolls. Let's see what the future brings. The LCD is fixed, and does not flip out. 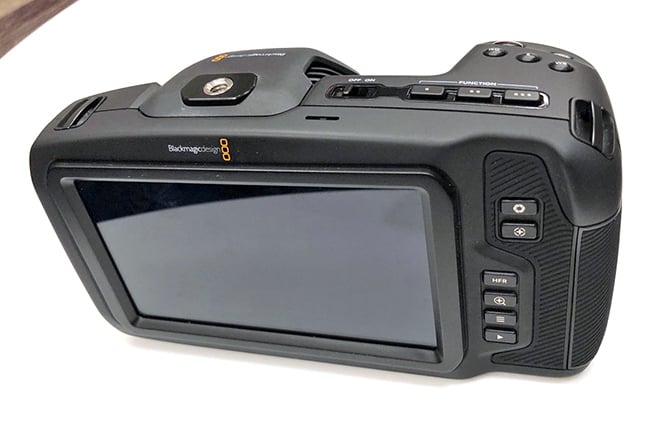 Simple controls with a lot of functionality. Note the large on/off switch and strap bars.

Okay, so I have teased you enough, what about those framerates and resolution? It produces a full 4096x2160 resolution picture at, be ready for this, 60fps. Yes, this camera will be able to do half speed slow motion at full 4K resolution (assuming your final output isn't 60p), with 120fps possible by windowing the sensor at HD resolutions.

Audio? This is where things get even better. We all know that the audio recording on the 4K Video Assist monitor/recorder is good, showing the company's commitment to better sound recording. Well BMD have seen fit to include 4 built in mics to the camera body as well as a mini XLR input with phantom power. For basic shooting, no more will there be a need to attach cumbersome external audio recorders. 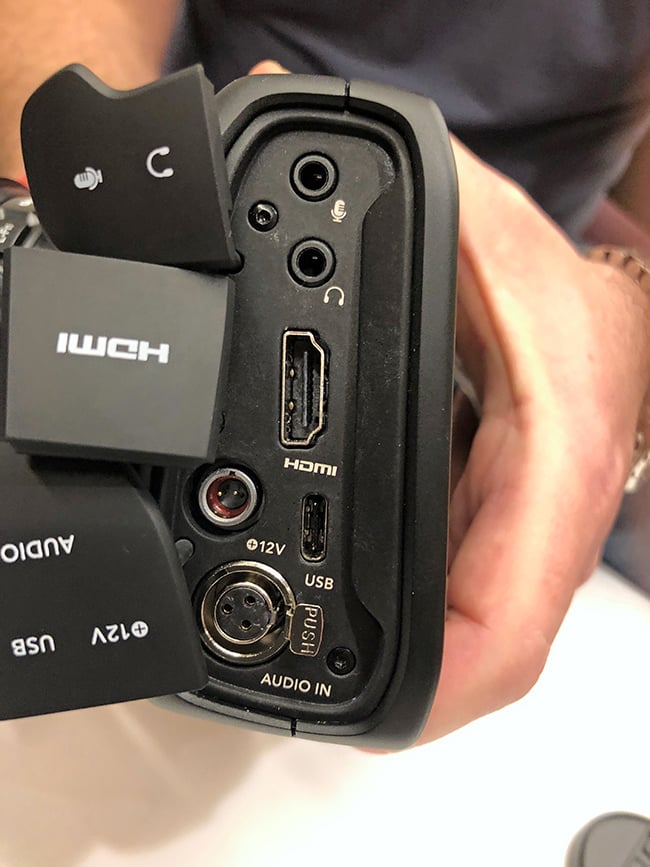 Footage can be recorded to CFast 2.0 cards or high speed SD. But the winning feature here is the USB port. If you have a USB-C HDD you can simply plug it right in to the camera body and record directly to it. Your footage is then completely NLE ready by plugging it into your editing computer.

A full size HDMI port also features that can either output a 10-bit feed to external recorders, or with overlays and LUTs for external monitoring. This is a feature that was heavily requested.

As a follow on from the Micro Cinema Camera the new 4K Pocket uses Canon LP-E6 batteries. For external power there is a choice between a long asked for safe locking DC plug or alternatively it can be powered by USB-C. 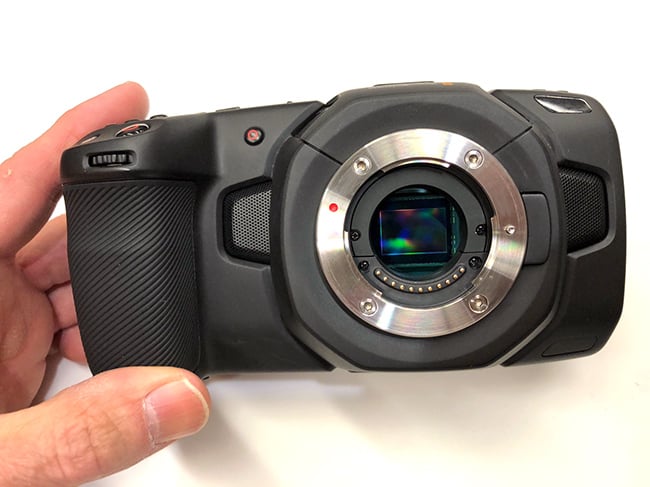 In some photos the BMPCC4K looks much larger than its predecessor. As you can see here, it is still quite diminuative in size.

This will be a big seller

The original Pocket Cinema Camera caused a storm. It is still well loved now, despite its shotcomings. The new 4K version would appear to resolve pretty much all of the complaints users had with the original camera, and then some. Oh, and it also takes stills as well, meaning that the BMPCC4K really should make for a superb travel companion.

There's even better news. Contrary to the excitable rumour mill, retail is set to be $1295. The 4K Pocket Cinema Camera will be available from Sept 2018.

Read RedShark News Editor In Chief David Shapton's views and an exclusive first hands on with the camera!

Blackmagic's press release follows on the next page.

NAB 2018, Las Vegas, USA - April 9, 2018 - Blackmagic Design today announced the all new Blackmagic Pocket Cinema Camera 4K, a handheld digital film camera with full 4/3 HDR sensor, dual native ISO with a maximum ISO of up to 25,600 for incredible low light performance as well as 13 stops of dynamic range. It also eliminates expensive external recorders, as it features a unique new USB-C Expansion Port, which allows customers to record using the internal SD/UHS-II and CFast recorders or directly to the same external disks they will use for editing and color correction. The Blackmagic Pocket Cinema Camera 4K will be available from Blackmagic Design resellers worldwide later this year for only US$1,295.

The Blackmagic Pocket Cinema Camera 4K will be demonstrated on the Blackmagic Design NAB 2018 booth at #SL216.

The revolutionary new Blackmagic Pocket Cinema Camera 4K is the handheld digital film camera that customers have been asking for. It packs incredibly high end imaging and professional features into a portable and affordable design that can be used anywhere. The compact body style is perfect for shooting independent films and documentaries, fashion shows, travel blogs, web videos, weddings, corporate video, sports and much more.

The Blackmagic Pocket Cinema Camera 4K features a full size 4/3 HDR sensor with native 4096 x 2160 resolution and 13 stops of dynamic range for true digital film quality. The full size of the 4/3 sensor is designed to perfectly match MFT lenses so the crop factor is greatly reduced, giving customers a wider field of view. It also features dual native ISO with a maximum ISO of 25,600 for incredible low light performance.

Designed using a space age carbon fiber polycarbonate composite, the body of the Blackmagic Pocket Cinema Camera 4K is extremely strong and light. The carbon composite material consists of a high strength polymer that’s reinforced with carbon fibers. This gives the camera body incredible strength and rigidity to help protect it from accidental knocks and drops which can often result in damage. The handheld design features a multi function grip which has logically placed buttons and dials that allow super fast access to essential shooting functions such as recording start/stop, still photos, ISO, shutter, aperture, white balance, power and more.

Images can be recorded onto standard SD cards, faster UHS-II cards or CFast 2.0 cards in either ProRes or RAW formats. The Blackmagic Pocket Cinema Camera 4K can record 4K images at up to 60 frames per second and windowed HD at up to 120 frames per second. It’s also the first camera that lets customers record directly onto the same exact external USB-C media drives they use for editing and color correction. That means customers can turn projects around much more quickly because they don’t have to transfer files. All they need to do is unplug the USB-C drive and then connect it to their computer to start editing.

The Blackmagic Pocket Cinema Camera 4K uses the same MFT (Micro Four Thirds) lens mount as the original Pocket Cinema Camera so customers can use the investment in lenses they already own. The MFT mount is extremely flexible and allows for different lens adapters so customers can also use PL, C, EF and other types of lenses from manufacturers such as Canon, Nikon, Pentax, Leica and even Panavision.

The rear of the camera features a large bright 5 inch touchscreen that makes it easy to frame shots and accurately focus. It also uses the same Blackmagic OS as URSA Mini so customers can use simple tap and swipe gestures to adjust settings, add metadata and view recording status. On screen overlays make it easy to see recording parameters, status, histogram, focus and peaking indicators, and playback controls. In addition, 3D LUTs can be applied for both monitoring and recording.

For audio, the Blackmagic Pocket Cinema Camera 4K features multiple built in microphones with an extremely low noise floor, a mini XLR input with 48 volts of phantom power to connect professional lapel and boom mics, and a 3.5mm stereo audio jack for connecting different types of video camera microphones. The high quality built in audio recording means customers don’t have to carry around a separate recorder.

The Blackmagic Pocket Cinema Camera 4K also includes a full size HDMI connector which can output HDR video as well as a clean 10-bit video feed with optional on screen overlays. There’s also an innovative high speed USB-C Expansion Port for adding external accessories such as flash drives and an SSD for external recording. The camera uses standard LP-E6 batteries and can be charged via USB-C or the locking DC power connector, which protects the camera from being accidentally unplugged during a shoot.

“Customers love the original Blackmagic Pocket Cinema Camera and have been asking us for a 4K version,” said Grant Petty, Blackmagic Design CEO. “We’ve listened and built a camera that combines all of our newest ideas and customer feedback from the previous model! The new Blackmagic Pocket Cinema Camera 4K is exciting because it packs so much technology into an incredibly small design. We feel it will go well beyond what customers expected. It’s perfect for anyone that needs a truly professional ultra compact digital film camera. This is not a consumer camera that's trying to do high end work, it’s a true high end camera designed for high end work.”

Blackmagic Pocket Cinema Camera 4K will be available later this year for US$1,295 from Blackmagic Design resellers worldwide.