What you need to know about interactivity 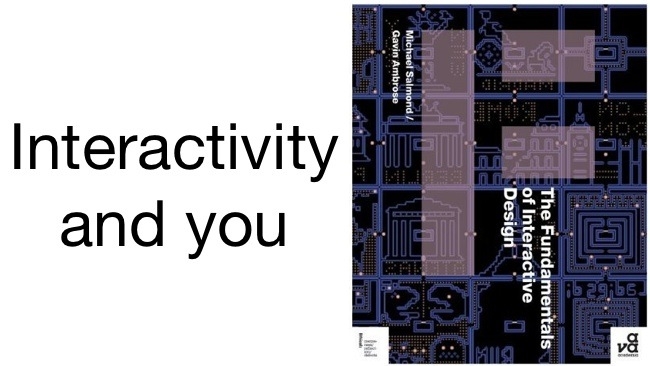 With more and more projects demanding some form of interactive component nowadays, anybody working with moving images ignores the subject at their peril. Andy Stout talks to Michael Salmond, one of the authors of a new book 'The Fundamentals of Interactive Design' about what you need to know

First off, what are the headlines here? Briefly what do video professionals need to know about interactive design?

As with pretty much every creative avenue these days, so much of what is produced ends up with an interactive component. This is not going to change, it's likely to become ever more the case. From a pure video production standpoint other than SD, HD and whatever's -next-HD, not much changes, but what will change is in the planning and idea development phase.

Videos are not just watched anymore; they're interactive - be that a simple interaction such as sharing or liking or a more involved interactive experience. In the book we showcase several projects, one of which was the Swedish agency Kokokaka’s work for Wrangler jeans. The studio produced two interactive video projects that enabled visitors to interact with video scenes, enabling a deeper sense of engagement and keeping audiences on the site for longer.

Nike is another company that utilises every media platform really well, and its campaign for Nike football is an example of an interactive YouTube video that was successful and engaging and allowed audiences to choose paths in a video towards different outcomes. We're at the stage where a video isn't always enough. Online, people expect interaction - and we're online all the time now.
Another interesting avenue for extended deployment of video is in Transmedia. This is the other area where video production and interaction meet. Transmedia is ultimately cross-media or expanded media storytelling that centres around a core element (such as a film property) whose storylines, characters or environments are expanded into online and physical spaces to engage with an audience on a variety of levels.
Can you give some examples?
A good example is the alternate reality game (ARG) from 42entertainment which was part of the campaign for the film Tron Legacy. The ARG was two-fold centred on engaging fans with “Where’s Flynn” and “Flynn Lives” web and physical content. The ARG involved characters from the film asking fans to get involved, fans going on real-world treasure hunts to uncover clues to secret locations and film content all propagated by media on a variety of websites. The gathering of fans for the unveiling of the 'end' of the ARG was included in the opening of the film and brought together all of the elements into a traditional film release.

Transmedia products feature websites, live and pre-recorded video, interaction and elements of discovery and adventure and are a great example of the integration of interactive media and video. Another transmedia favourite is the use of games to tell an extended story from a franchise’s universe. Games have been used to market and launch films, an example is AKQA's 221b Baker Street (2009), which was an online game that was launched before the blockbuster Sherlock Holmes movie and worked as a marketing device and media buzz machine. At its core 221b was a solid interactive experience that introduced the world of Sherlock Holmes while leveraging social media to extend the marketing reach of the property.

The popularity of transmedia is something that audiences are beginning to expect more and more, passive media will remain relevant, but interactive media is increasingly the future for many forms of visual media. We expect to touch and interact with all our devices, very soon we'll expect the same from our media too - actually I'm pretty sure this has already happened.
How has all this changed to reflect the way that technology has evolved?
The possibilities seem endless now, as 3D screens become glasses free and devices such as Kinect allow full body (and fingers) interaction why would people sit and just watch? Of course people still will, but the expectation of some form of interaction is increasing. It's about how we integrate new technologies and sensibly approach building interactive and immersive environments.
Content creators have to expect people to want to share every video and to build infrastructures around that. Youtube clips are getting larger audiences than many movies and most TV shows (and often have longer staying power). This has never happened before and we're still developing coping strategies as content creators. For quite a few years it's not been enough to just create footage and content for a movie and its trailer, you have to consider the mobile, tablet and web audiences. And with that not just the device but how they're interacting and where they're interacting. On a couch, plane, train or city street - what are their levels of engagement and what do they want to do with your footage?

Then what can they do with it? Creatives have to understand those audiences and realise that people expect content on-demand and are beginning to be more and more frustrated with release date windows and basically anything that keeps them from getting the content they want (and are more than willing to pay for) as soon as they know it exists. Interactive media designers have always had to cope with a billion websites being a click away from their content as well as the difference in styles of engagement. Passive media people are turning increasingly to experts in this field to better get to grips with new audiences and their consumption of media.

How has the visual language of motion graphics changed over the past decade? Is there increasing sophistication on behalf of the audience?
In a decade it's probably not that much, the technology that creates the graphics has come on extraordinarily. Programming has become a core animators skill now, it's not enough to just create and animate. From an interactive standpoint there's higher levels of integration; motion graphics and interactive designers work side-by-side on projects rather than handing work off to one-another. Studios are increasingly involving all members of a property into discussions from inception to final product. When a studio thinks of the graphics team separately from the web development or video production team they’re going to fall behind.

Aesthetic trends come and go but fundamentally designers have begun to shift into infographic and visual data sets over text and 'boring' static shots even if they're informative. Motion graphics can deliver deep meaningful information to audiences in an entertaining and visually rich manner. In a world where icons and angry birds rule, motion graphics and infographics are becoming a bridge between aesthetics and content delivery.

In that regard the audience has changed, they still want the information and want depth but they want it delivered as visually as possible because that's begun to feel more intuitive to people. Don't talk about dinosaurs, show me one and better yet give me an Augmented Reality tag and let me play with a dinosaur in my own room (we feature the project Appshaker Studio did for National Geographic which is a testament to the power of interaction, animation and engagement).
Where are we going with all this? What will the the impact of Ultra HD, for example?
4k is something that interactive designers are focused on because we've already had our mini 4k revolution with the advent of retina/high resolution displays. For interactive designers 1080p is pretty much a slightly fuzzy low resolution.
From here on out it's all going to be about resolution, all media is experiencing what PC based videogamers have had for decades, more pixels and higher resolutions. What would be great is if all devices were the same size and the same pixel density, but sadly that’s not the case. This is something that will increasingly worry broadcast people. Anyone in video production should already be experiencing the differences in screen size and how their content is delivered to an iPhone 5, an iPad, Samsung or HuaWei device. It's no longer just 16:9 and broadcast standards, mobile media has changed everything and it will continue to do so.

People no longer expect to have to download codecs or plugins, that's just gone now - it all has to compress and look HD and stream over 4G seamlessly. Consumers are getting further and further away from the technical side of content delivery, which means the systems have to be ever more rugged and ever more engaging. With higher resolutions comes also a change in production pipelines and responsive media. This is still fairly new in the interactive world, but it’s something that video production people are also dealing with and YouTube does very well. The ability to deliver content seamlessly in a variety of formats to a variety of devices at a variety of bandwidths so that anyone can engage with content anywhere.

How will the move towards a truly multiscreen environment where content has to work on 50in plus and sub 7in screens change things?
This is an aspect of content delivery that interactive designers have had to deal with since web 1.0 but now it's far more complex, especially if you are trying to maintain quality seamless delivery across multiple devices. For now consumers may be okay with letterboxing here or slightly lower resolution video there, but that's not going to hold. We all lived through the dial-up days and choppy mega-low resolution video, and within 15 years we have 1080p streaming.

Content is always going to be king but increasingly the consideration falls on how to keep those eyeballs where you as a creator want them. With all the disruptive devices that are constantly distracting audiences away from passive media, interaction is a way of getting them back. The second (and third) screen space is still very much in a wild west period - with few companion apps delivering a solid and engaging experience (The Avengers second screen experience being the exception).

Second screens hold the promise of more content, more depth but they also operate to unfocus viewers from the main show or movie, which is problematic for broadcast, advertisers and film creators. Interactive media is inherently engaging, it is more playful and allows an audience a level of feedback and that leads to more emotional and rewarding experiences. All partners in the creative process have to get together and thrash out every element of the experience for the audience. Responsive media is the answer right now to how to deliver content across devices but this will change in the near future, what’s important is that every stakeholder understands their audience and how they consume media. Interactive design has been engaging with this for years and has invented the language of the digital consumer.
It’s incredibly important that any content creator understand their delivery systems and to know that the audience is changing and look to other disciplines for answers on how to re-engage that consumer-base.

The Fundamentals of Interactive Design by Michael Salmond and Gavin Ambrose is published by Bloomsbury and is available now in the UK and from 1 April in the US.