Now you can buy huge SSDs that are bigger than any hard drive. For a price 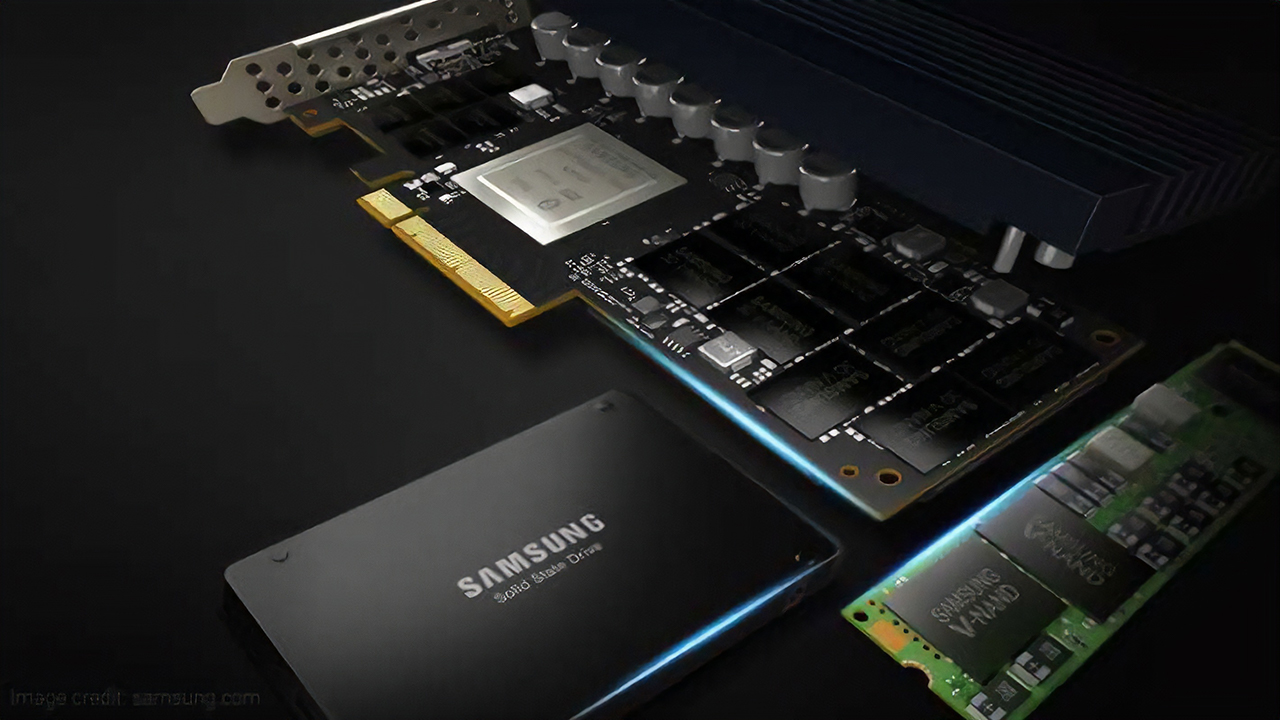 SSDs are now exceeding traditional HDDs in capacity. None more so than with Samsung's latest announcement of its huge 32TB drive. But will we see the prices of SSDs drop any time soon as a result?

Korean chip giant Samsung has launched the PM1643 SSD with a massive capacity of 30.72TB, double the figure we saw with the previous 15.36TB PM1633a.

You may be aware the PM1633a sells for over US$10,000, so we can confidently predict the PM1643 will also be hellishly expensive.

Samsung began manufacture of the 30.72TB drive in January and will extend the family later in 2018 to include models with capacities of 15.36TB, 7.68TB, 3.84TB, 1.92TB, 960GB and 800GB. We have little need to be concerned about the prices of these Enterprise SSDs as they are not aimed at consumers, but they tell us a lot about the direction of travel in the SSD market.

The major differences between the PM1633a and the PM1643 are the introduction of 64-layer 3-cell NAND in place of the previous 48-layer, a new controller chip and a change in cache from 16GB of DDR3 to 40GB of DDR4. That’s a huge amount of cache that probably costs around £400 at current prices and the technology used in its packaging is interesting. Samsung has stacked ten 4GB DDR4 packages and then used Through Silicon Via (TSV) technology to interconnect the chips. Traditional interconnects trail the contacts down the outside of the stack of dies to link them together. Vias are the equivalent of punching holes through the stacks and then driving the conducting material through those holes, which is more complicated but helps power efficiency. We are told this marks the first time that TSV-connected DRAM has been used in an SSD.

The new NAND chips are configured as 16 stacked layers of the 512 Gigabit chips that give a 1TB package, and there are 32 of these packages arranged inside the chunky 2.5-inch form factor with an overall height of 15mm. This is a nominal 2.5-inch form factor drive. However, it is intended for specialised Enterprise users, hence the continued use of a SAS 12Gbps interface.

Power consumption of the PM1643 is the same as of the PM1633a, and despite the doubling of capacity, performance has increased significantly with sequential read/write speeds of up to 2,100MB/s and 1,700MB/s respectively, while endurance has been maintained at the same level.

This new Samsung SSD moves capacity beyond the 30TB+ mark which is pretty stunning for a single drive in any format, let alone 2.5-inch, and clearly demonstrates that solid state technology can crush hard drives in terms of capacity as well as speed.

That though does not directly address the needs of mainstream users who value SSDs for their blistering pace when working with video but who do not care to spend north of US$10,000 on storage.

Unfortunately, we are only seeing incremental improvements in drive capacity and modest reductions in price. For example, Crucial has introduced 64-layer Micron NAND in its new MX500 drives, compared to 32-layer NAND in its previous MX300 series. An MX500 costs slightly less than the MX300 – for example, £429 for 2TB against £472 – and the MX500 has slightly improved speeds of 560MBps/510MBps versus 530MBps/500Mbps. While those changes are welcome, they will not persuade anyone to trade in their current MX300 for a new MX500, but would instead make you pleased you were buying an MX500 instead of an MX300.

From a technical stance, 3D NAND has passed the point where it is cheaper than planar or 2D NAND and we now see 64-layer products as the cutting edge technology from Samsung and Intel-Micron. As a point of fact, SK Hynix has just announced it will be producing SSDs with 72-layer NAND along with their own controller, which likely uses LAMD technology they bought in 2012. It is clear we are leaving 48-layer NAND behind and moving forward with ever-taller stacks.

It might seem that the next logical step is 96-layer NAND as that would promise an obvious bump in capacity, but it seems more likely the NAND manufacturers will instead concentrate on stacking the chips to deliver higher capacities. To the best of my knowledge, if you take a 100-layer chip (to keep the maths simple) and stack ten of them vertically to achieve 1,000 layers, you get a similar result to developing a 200-layer chip and then stacking those chips five high.

The 1TB packages used in the Samsung PM1643 are useful building blocks as they suggest it should be possible to deliver a replacement for the 960 PRO SSD with a capacity of 4TB in M.2 form, rather than 2.5-inch. We all want higher capacity SSDs and some of us are frustrated by the need to choose between a 2.5-inch form factor SSD with decent capacity or an M.2 drive with half the capacity.

Throughout 2018 and 2019, we can expect SSD capacity to creep upward, but the best we can currently hope is that 2TB drives move into the mainstream while 1TB drives become relatively cheap. The other half of the problem is that SSD pricing is unlikely to drop any time soon. There are very few manufacturers of NAND flash (Samsung, SK Hynix, Toshiba, SanDisk/Western Digital, Micron and Intel) and they are all working flat out, manufacturing chips for mobile phones and laptops, as well as SSDs for desktop PCs and servers.

At present rates it does not seem likely we will be able to buy an 8TB SSD for £500 anytime before 2025.