PXW-Z90 is so good it redefines palmcorders 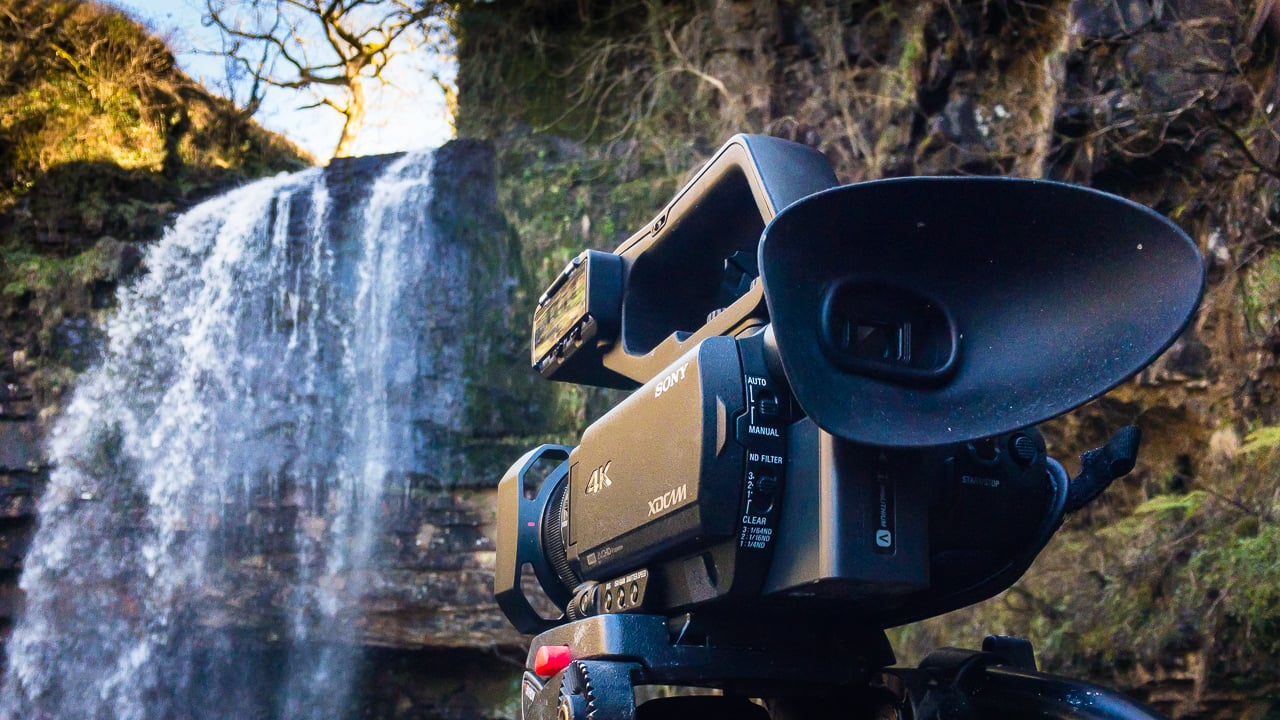 The compact and portable Sony PXW-Z90

Review: We take the Sony PXW-Z90 XDCAM for a spin and discover that the little camcorder turns out to be a rather outstanding addition to the lineup.

When you think of Sony’s XDCAM range, the kind of camcorder that comes to mind is one that is generally of reasonable size, such as a news camera, or one of the interchangeable lens cine cameras such as the FS7. In professional circles perhaps, small form factor palmcorders don’t usually fall on the radar as a wholly professional tool. Instead falling into use when you don't have much choice, or discreetness takes priority over picture quality. However the PXW-Z90 may well fly in the face of this convention as you'll see.

For a start it features a 14.2MP 1” CMOS chip from Sony’s EXMOR RS range. This is a back-illuminated stacked sensor, and as we’ll see later makes this camera much more than your fathers palmcorder. It also, perhaps controversially for some given it’s 8-bit 4K recording format (1080p is 10-bit 4:2:2), features both Slog2 and Slog3, along with various HLG modes, which tells us that Sony fully intend for this camera to fit into HDR workflows. Additionally it is capable of very high frame rate shooting at certain resolutions.

Those are the headline features, so let us delve into much more detail.

The PXW-Z90 is very much a compact palmcorder. At 121mm x 104mm x 274.5mm and around 1.3kg with it’s included accessories and battery attached, this is a very light and portable system.

When the camera comes out of the box it is just the body alone. However an optional top handle is included, and once this is attached by way of two large thumb screws, the camera then gains comprehensive audio controls, including attenuation settings up to 20dbm, a switchable low cut filter for each channel, and two full size 3-pin XLR audio sockets. A hot shoe also features at the front of this, as well as a secondary mounting point for an included cold shoe towards the rear of the handle.

Despite the light weight the finish and feel is one of robustness, featuring a textured finish usually found on much larger cameras.

Control wise such a form factor still requires the use of a switchable infinitely rotating servo ring for the zoom and focus functions, as well as a small dial for manual iris adjustments. Standard control fare for such a camera, and one which may not initially appeal to power users. But as you will see later, it functions pretty well regardless. 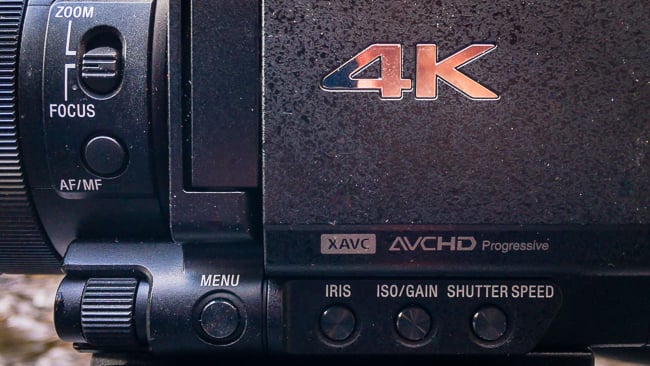 The general side button layout of the Sony PXW-Z90

There are a number of useful function buttons, the layout for which is uncluttered and easy to use. They control and select such functions as the display overlays, focus assist, white balance, ISO/gain, shutter speed etc. The rear of the camera features an SDI out, HDMI out, and a remote socket. Don’t reach for your Atomos Shogun’s just yet though. The output from these maxes out at 1080p/60. Remember, this isn’t a cinema camera. The broadcast market, which still works predominantly in HD resolutions, is a primary target for this camera. And with 10-bit 4:2:2 recording at 50Mbps in 1080p, it records double the minimum EBU standard for H.264 style encoding for this purpose. 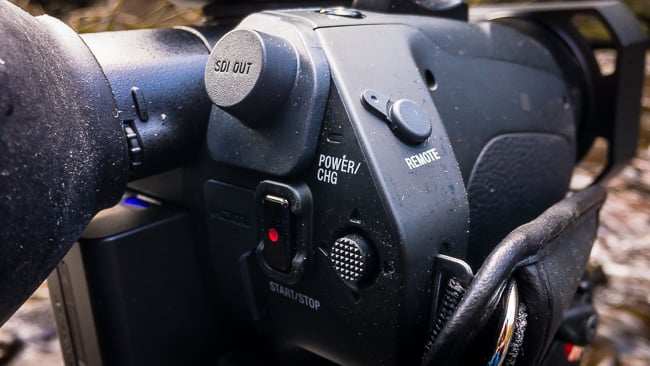 There are two ways to turn the PXW-Z90 on, and both of them are extremely convenient. Traditionally we are used to pressing a power button or flicking a switch, and then flipping out the viewfinder or LCD display. While it might not seem a huge thing, the PXW-Z90 cuts this process down to simply flipping out the LCD or the EVF. Flip them back in again and the camera turns off again.

It’s incredibly simple and it doesn’t sound like it would make a lot of difference, but I found it gave me a much more fluid feel to powering it up and starting to shoot. If you think about it, if you have a spur of the moment event you want to capture, having to find a power switch before flipping out a display could mean the difference between capturing it, or not.

Power up time for the camera is instantaneous. A second at most. For a camera designed for journalistic application, such short power up times are absolutely essential.

The menu system is clearly laid out. The professional pedigree of the PXW-Z90 is apparent from the picture profile setup menus. This is a camera that can be tuned in much the same way as full size broadcast cameras can be. Assuming you are not going to be using the Slog options. You can manually set up the knee points and slope, adjust RGB and CMY settings for colour depth, tune the black gamma, detail vertical and horizontal balance, crispening, highlight levels and more. In other words, there shouldn’t be much of an issue for broadcasters to set this camera up to their preferred settings for a consistent look. In all there are 10 memories for picture profile setups, so you shouldn’t be left wanting for variation depending on circumstance either.

On the subject of gamma selection, the PXW-Z90 has an incredibly wide range of selections available, including Cine Gammas, Rec.709, Rec.709(800%), Slog2, Slog3, and a range of HLG options too. These can also be set up with a corresponding colour space. For example it is possible to set up the camera with the very pleasing, and film like Slog3, matched with Sgamut3.cine colourspace. Remember that I said this wasn’t a cinecamera? I lied slightly. The PXW-Z90 can be used to obtain some very nice ‘film like’ images indeed if required to do so! 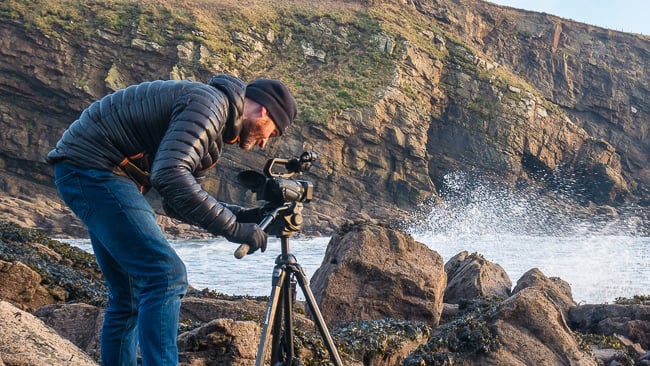 The 1” chip means that you aren’t having to put up with the usual limitations that come with such a small camera. This tiny palmcorder has a CMOS chip larger than any traditional ENG camera. It’s a sweet spot between a 2/3” chip and an MFT sized sensor. In fact in my whole time shooting with the Z90 I never once thought I was compromising the picture by shooting with it. Normally you’d have to drag me kicking and screaming to film landscapes or anything of ‘beauty’ with a palmcorder. Not so with this one. Which is a good thing, because it is incredibly portable and easy to carry around.

The 1” CMOS means that obtaining usefully shallow depth of field is relatively easy. For creativity this is incredibly useful, but it also means that for head shots you can throw the background out of focus without much trouble. Something that could never traditionally be said for a camcorder of this type. I had to keep reminding myself of the chip size because usually with such a camera I am very careful of the iris settings due to the problem of diffraction resulting in substantial softening of the image at higher f/stops. But the 1" chip allows much more freedom to stop down before such issues become a visible problem.

One side note to this, however. If shallow depth of field is what you are aiming for, the highest 1/64 ND setting on the camera is not quite enough in bright sunshine, so you will still need to bring some extra ND with you. 62mm is the diameter that you will require for this.

The Zeiss produced lens runs from 9.3mm to 111.6mm (with the ClearView enhanced zoom), which is the equivilent of 29mm to 348mm on a 16:9 35mm sensor. So usefully wide, and very usefully telephoto. The lens is f/2.8 at its widest focal length, dropping down to f/4.0 at the long end of things.

In use I did find that some of the controls still suffered from some of the usual fiddliness for such a camera. After all at this size it doesn’t have big manual lens rings and metal switches. The flip out LCD, depending on the angle that I placed it sometimes got in the way of the lens controls if I was controlling from the front. But you will rarely need to use these, instead utilising one of the two zoom rockers available. But I am glad to say that in the cold with thin gloves on I was able to use the controls fairly easily all things considered.

On the subject of the zoom controls, the zoom rocker controls were smooth, although the lowest speed they could do was rather a jump from static. So if you want to do a very slow creeper zoom you will need to use the lens ring for more tactile control, or attach a LANC controller. 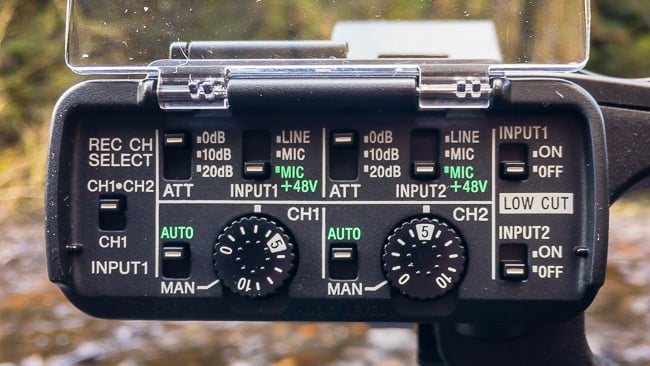 The comprehensive audio controls on the Sony PXW-Z90

One of the headline features of the PXW-Z90 is its autofocus abilities. I tried this in a number of scenarios, and there are a few different modes. But the most interesting and useful one is called Flexible Spot. This very clever mode automatically identfies human faces and moving objects. You can also press on the screen on the object of interest and the camera will show you a green box around it as it tracks it. Pull and push focus moves are also incredibly easy and smooth in this mode. It works remarkably well, to the point where it is one of the few autofocus systems I could actually trust in many instances.

It does, as most autofocus systems do, become confused in low light. But even on troublesome sparkling sea waves pointing into the sun the Sony kept track of things nicely with minimal confusion except for the very odd occasion.

The stabiliser on the PXW-Z90 has three modes. Off, Standard, and Active. Active, as per other Sony cameras, uses both optical and electronic stabilisation in tandem. On wide shots while walking along it seemed to work fairly well, although I could in no way call it Steadicam smooth! What I did find useful though, was how it coped with handheld static shots, even on a telephoto setting. I zoomed right on in to a tower at St Davids Cathedral fully hand held, and it kept the shot almost as steady as a tripod. So I would still consider it to be a good stabilisation system.

Stay tuned for the concluding part of this review where I will cover slow motion, wifi modes, picture quality and include the all important example videos from my time with this little pocket rocket of a camera.