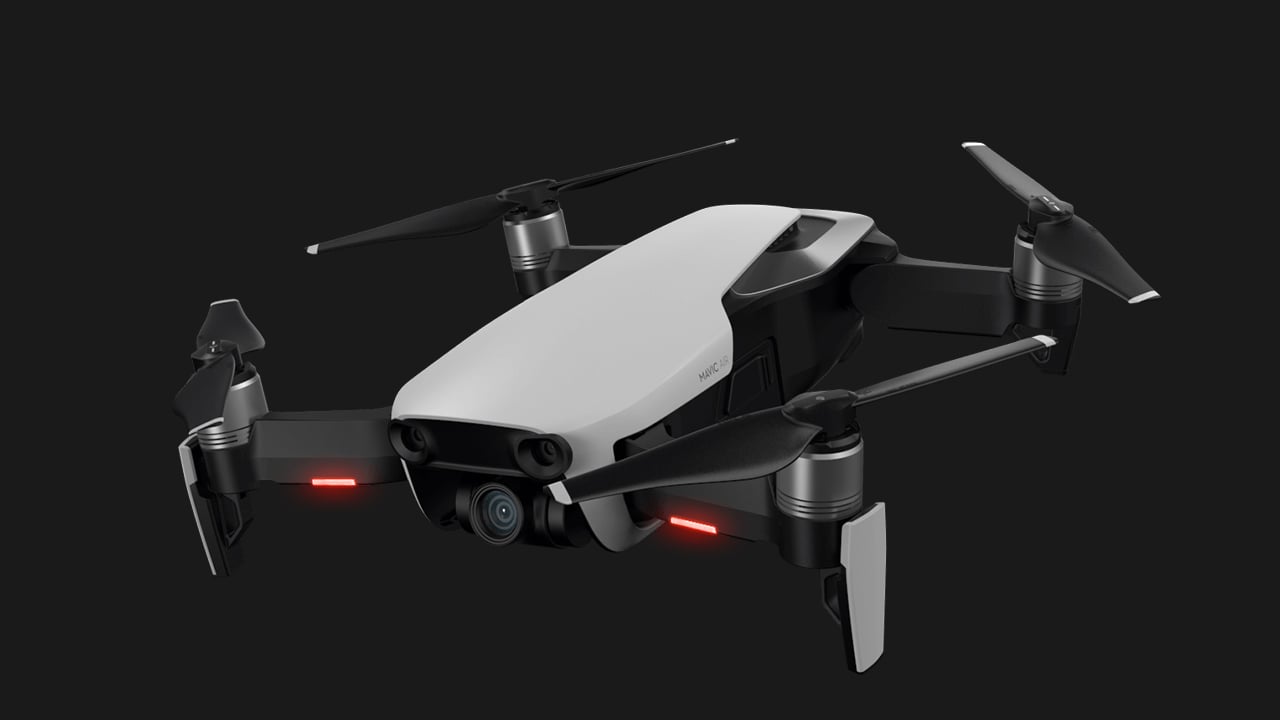 As if the original Mavic wasn't portable enough, DJI goes and shrinks it further and increases the bitrate for good measure. Ned Soltz gives us the lowdown.

DJI has announced the Mavic Air drone. Correctly touted by DJI as the smallest and most portable 3-Axis Gimbal 4K drone, Mavic Air embodies new features for pilot assistance and both still and video capture.

Mavic Air is completely foldable and fits in a pocket. It is some 41% smaller than the original DJI Mavic and weighs a mere 430 grams (just under 1 pound). In fact, a visual shown by DJI at its introductory press conference showed the Mavic Air side by side with mobile phones and other devices. And it has about the same dimensions.

Mavic Air is based around a 12mp camera on a 3-axis gimbal and able to shoot 4K 30fps MPEG-4 video at 100 Mbps and 1080p HD at frame rates up to 120fps. That sensor is a 1 /2.3” CMOS with a 24mm full-frame equivalent lens and a maximum aperture of f.2.8. It accepts MicroSD cards. And in case you forgot your SD card, it has 8 gb of onboard solid state storage, easily transferred via a USB-C port.

Among the design innovations of the product is the recessed gimbal to provide more protection and vibration damping when flying as well as additional protection when folder and transported. Propeller guards are standard for safety.

But it is in the electronics and enhanced modes that the Mavic Air excels.

DJI introduced hand-gesture control with the original Mavic and these controls are enhanced in the Mavic Air. The Mavic Air can be controlled by gesture at a distance of up to 20 feet still with all of the pilot control and safety features that would come into play if flown via the included controller.

The learning curve for new users is shortened by the device’s intelligence which is due to not just enhanced firware/software but also through the addition of more sensing-cameras and a more sophisticated algorithm for object avoidance. It was impressive to see a live demo of Mavi Air flying with controller pointing straight ahead yet deviating for obstalces intentionally placed in that path.

QuickShot modes were introduced with the Mavic Pro and Mavic Air adds two more. The original modes of Rocket, Dronie, Circle and Helix remain but the addition of Asteroid and Boomerang. Asteroid creates a spherical image and then flies down to create a flattened image. And, speaking of spherical, it does have a spherical still mode which can create panoramic images within the Mavic Air itself with a processing time of less than a minute.

Active Track technology has been enhanced to be able to sense multiple objects automatically and to keep them in frame.

All of this is possible due to the Mavic Air’s FlightAutomony 2.0 system with 7 onboard cameras which construct a 3D map of the surroundings providing greater safety when flying backwards, in particular.
Battery life is now a whopping 21 minutes. It can sustain winds up to 22 mph and operate as high as 16,404 feet above sea level. It can reach speeds of 42mph (68 kph). It is compatible with DJI Goggles.

It comes in Onyx Black, Arctic White and Flame Red. I’m ordering mine in Red.