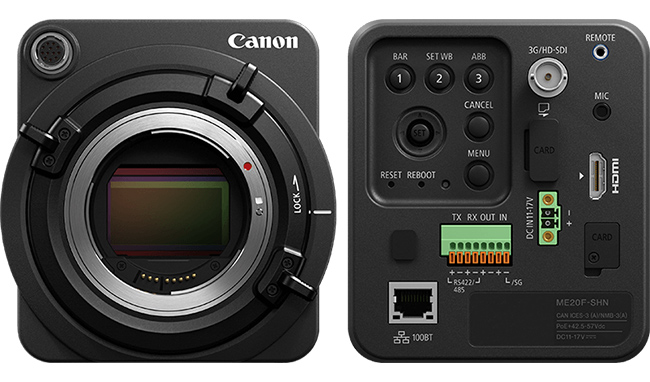 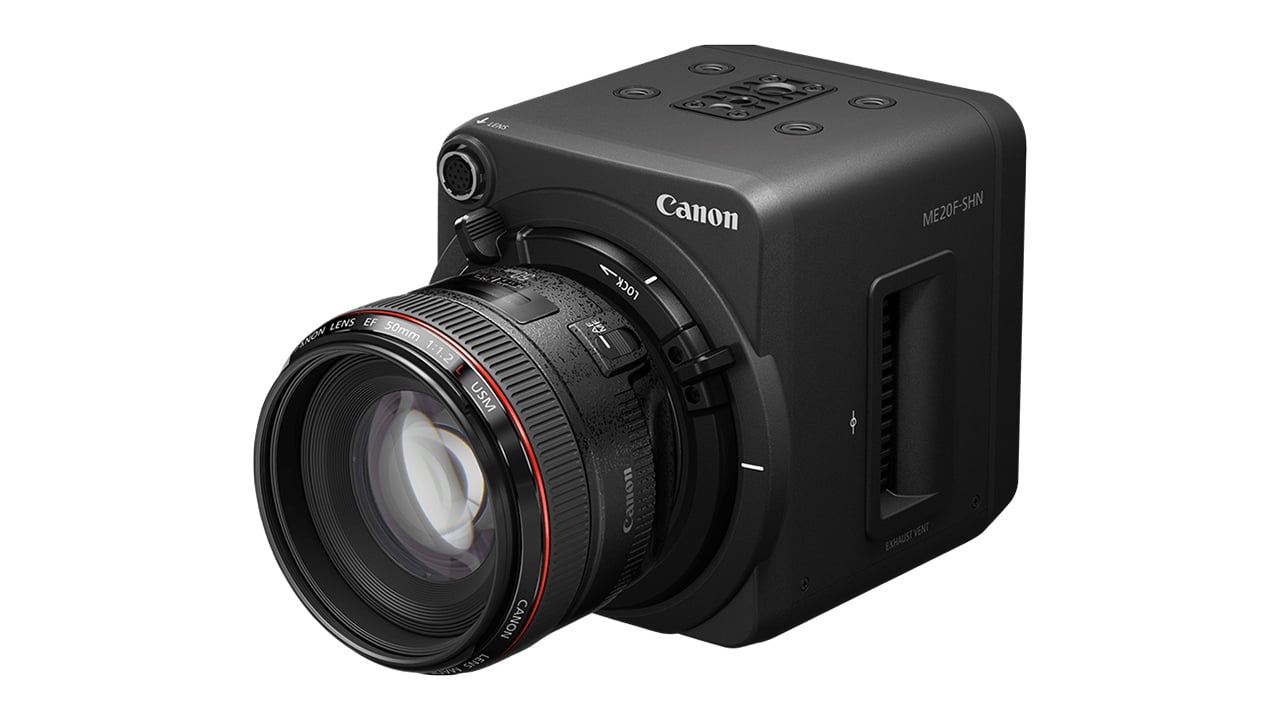 With a maximum ISO of 4 million, it doesn't look like you'll miss much action with the latest iteration of Canon's ultra low light shooter.

Canon has created a new version of its low light super camera which shoots colour HD in extreme low light conditions. The ME20F-SHN can capture subjects illuminated with less than 0.0005 lux and takes advantage of the combination of a large full frame sensor and a resolution of only 2.26MP to make the most of that incoming light. This results in a maximum ISO in excess of 4 million (+75db). The original camera seemed to be designed with extreme low light cinema EOS applications in mind. For instance it features both Canon Log and Wide DR and has a Canon EF mount with Cinema Lock, but the camera has now been retooled with additional network capability for wired ethernet applications.

The camera has also been upgraded to work better in well lit environments too. The Custom Picture menu has been upgraded, with the addition of the Crisp Img function, which obtains sharp images in well-lit environments while keeping the noise low in low light situations. Even greater detail can be captured in low-light environments by removing the IR cut filter when shooting in infrared mode.

Those are probably the main upgrades for those looking to use the camera in cinema style applications but Canon has now added some network connectivity to the camera and it can now be operated through a web interface as well in order to enable remote operation of camera settings, monitoring and recording. However video output via a network is restricted to a resolution of 1080p and a frame rate of 29.97 fps.

The Canon ME20F-SHN can be connected via an Ethernet connection and the LAN cable can also carry power for the camera via the PoE+ standard (IEEE 802.3at). The PoE+ standard provides power over ethernet support to devices with a higher power draw than those that might be traditionally used in PoE applications. Obviously requiring only one cable for both power and data simplifies installation of the camera, especially over longer distances. 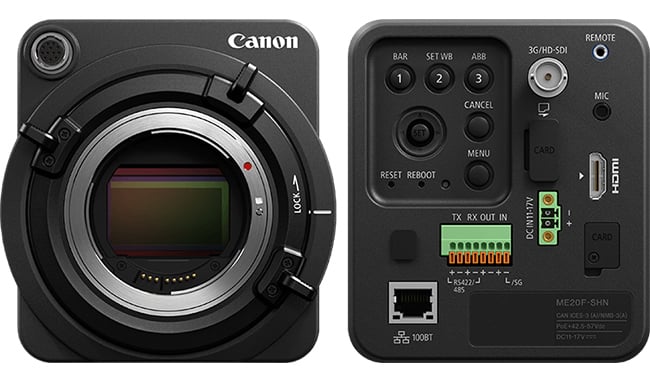 Front and rear views of the Canon ME20F-SHN - Canon

There are 6 built in video analysis functions: Moving Object Detection, Abandoned Object Detection, Removed Object Detection, Camera Tampering Detection, Passing Detection, Intrusion Detection. These along with the alarm I/O interface allow you to automate recording by triggering whatever recording device/software you might be using. So you can make use of cost effective unmanned surveillance, which might come in handy in a natural history context where you might want an unattended camera to watch a locaton for capturing footage of wildlife at night. The ME20F-SHN supports a wide range of video management software through Canon WebView and ONVIF protocols.

There is something called the Area-specific Data Size Reduction (ADSR) function which enables users to capture absolute detail in selected areas of interest while reducing detail and hence the bit-rates of the compressed data in the other areas of the image in order to save network bandwidth. For more conventional video connectivity there is a 3G SDI interface and a HDMI port as well. The camera can also record directly to a microSD card.

I would have said not to forget to bring some ND filters with you, but the camera already has two ND filters built in with a density of 1/8, (3 stops) or 1/64, (6 stops).

Although pricing has not yet been announced the camera is unlikey to be a low cost route to low light imaging as the previous version of the camera without the network capability cost over £19,000 when it was released in 2015. For more information head on over to Canon's website.