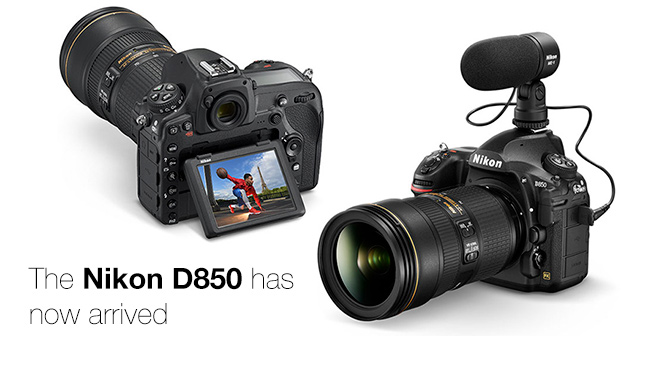 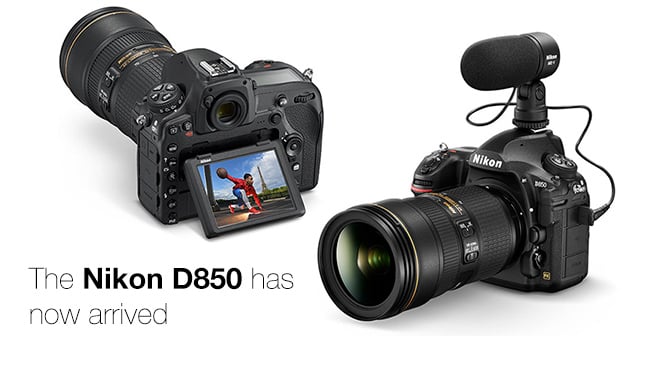 To a huge amount of anticipation, the Nikon D850 has finally arrived. The Nikon D810 was a favoured camera of film-makers working in full frame video, so people have been waiting with bated breath to see what the company will produce as a more modern replacement.

The Nikon D850 contains Nikon's new back-side illuminated (BSI) full-frame sensor technology and has an updated version of the Nikon F bayonet mount with support for electronically enhanced Nikkor lenses. It features both high resolution and high speed performance in a wide variety of contexts for photography and video. The high resolution comes in the form of 8K time-lapse, 4K Ultra HD Video, and in the context of photography in the form of 45.7 megapixels of resolution. The high speed performance, on the other hand, arrives in the form of 120fps video at 1080p and up to 7 fps continuous shooting (9fps if you have the special battery grip) of full resolution stills while maintaining full Auto Focus capability. There is a silent mode for continuous shooting as well, which uses an electronic shutter instead of the mirror shutter, but it can only achieve a maximum of 6fps and it means you have to monitor the video in live view mode. However, it could be something that will come in very useful for applications such as wildlife photography or weddings where you don't want noises to disturb the action.

The camera shoots stills in small, medium and large raw formats, and in a 12-bit, lossless compression container. It lets users batch process RAW files in camera too, saving time in post-production.

Nikon is promoting the camera as being good for "hybrid" photographers who shoot both stills and video because it is very capable in both fields. Images captured with the D850 can be enlarged to up to A2 in size.

For cinematographers, the feature that sets this camera apart from the pack will probably be the 8K time-lapse capability. The camera has an intervalometer built-in that can actually shoot at slightly more than 8K DCI resolution. The FX-format photographs that are taken during movie recording have a resolution of 8,256 x 4,640. Available interval times from the internal intervalometer are every 2, 5, 10, & 20 seconds. It can also shoot 1 to 9 exposures at intervals of 0.5, 1, 2, or 3 seconds.

Although the Nikon D850 can only shoot time-lapse in 8K, there are not many video cameras presently that can shoot native 8K video at all. Red Helium based cameras can manage it, but you won't be able to buy such a camera for $3,299.95. 8K Ultra HD video has 16 times the pixels of 1080p HD. That's a lot of resolution to play with, and the Nikon D850 also lacks a low-pass filter for anti-aliasing so it won't suffer from the softening of the image that such a filter might cause. Of course, most cameras have anti-aliasing filters for a reason, but Nikon claims there is "virtually no risk of moiré” with the Nikon D850.

There are, of course, a couple of caveats to all this. First, there is the issue of finding lenses that can actually resolve the full 8K resolution of the sensor, and secondly there is the issue of how to display your finished 8K masterpiece in a world where cinemas are mostly 2K, and where 4K televisions are a relatively recent development (but take-up is happening very quickly). NHK's 8K television project might be one possibility in the near future because if that takes off, they will probably need a lot of 8K content for it. But Nikon is also thinking along the lines that the camera could be used for 8K digital signage displays right now. Such content could perhaps feature 8K time-lapse alongside 8K images and even 4K Ultra HD video that has been upsampled to 8K. While shooting 8K video requires a lot of storage, the shorter duration of the video that result from shooting time-lapse means that it's more manageable than it would be to shoot 8K video at 24fps, so it would seem the Nikon D850 might deliver quite a practical combination of digital assets as the sole camera for a project.

You can, of course, downsample your 8K time-lapse in post too to get 4K, 2K or even 1080p video with really high-quality pixels for the kind of common non-8K video applications that you might already be working with and you can even shoot time-lapse in 4K Ultra HD that can be assembled into a video in camera instead of in post.

In addition to the capability of the intervalometer, the Nikon D850 is also capable of shooting many of the bread and butter frame rates that you might expect. It can shoot at the more ordinary frame rates of 24, 25 and 30 fps in Ultra HD 4K, but it can also shoot 50 and 60 fps in 1080p. It can even shoot 120 fps in 1080p for slow motion applications. It would be nice to have the kind of variable control over frame rates you can get from Panasonic’s Varicam, but the Nikon D850 probably has a frame rate option to cover most needs, especially if you consider the low frame rate options available from the intervalometer and the burst modes of the camera. The camera even supports the frame rates needed to shoot in both 50Hz and 60Hz countries, which is useful if you are travelling and shooting under artificial light.

The camera has two card slots. One for an XQD card and the other card slot is for SD cards. It supports SDHC & SDXC cards that are UHS-II compliant. The camera shoots H.264/ MPEG 4 video in .MOV format. The maximum file size is 4GB, after which the camera starts to span the video across files of 4GB each up to a maximum of eight files. So that's a total of 32GB for each recording you make. The Nikon D850 also has a maximum recording time of 29 minutes 59 seconds when recording video. It also has clean HDMI-out so you could also use an outboard recorder such as the Atomos Ninja Flame or Inferno to record in 4:2:2 8-bit 4K UHD at higher bitrates than are possible internally. It's even possible to record external and internal recordings simultaneously so that you have a backup if there is any kind of issue.

For Still Images the file formats are:

In terms of audio, the camera has a built-in microphone, but it's possible to use an external microphone as well, and the microphone sensitivity can be adjusted in-camera. However, the camera does not have canon XLR sockets, only a 3.5mm stereo jack socket, although that socket does feature plug-in power if your microphone supports it. There is also a headphone socket.

The camera has extended low ISO capability that takes the camera down to 32 ISO from the 64 ISO the camera supports natively. This should help when shooting in bright sunlight. The native ISO also tops out at a high of 25,600, but it also supports an extended high ISO of 108,400 for shooting in really low light conditions. Nikon’s back-lit sensor should help with the low light capability of the camera. The non-native high ISO’s are usually achieved through gain, which tends to lead to more noise, but the Nikon D850 has a high ISO noise reduction feature that might come to the rescue to help keep things clean, even when shooting in low light with the extended ISO functionality.

The Nikon D850 would appear to be a very capable camera in a small form factor that can easily be mounted on gimbals, stabilisers and motion control rigs. It might even work well when mounted on a drone. It not only shoots 8K time-lapse, but it can also shoot a wide variety of video frame rates including 120fps slow motion, so it's a really versatile camera without even considering the potential for still photography. The clean HDMI-out means that you can use outboard video recorders to get higher bitrates out of the camera and the relatively low price for the kind of capability this camera offers means that it might find uses where other cameras might not be suitable, perhaps as a crash camera even!