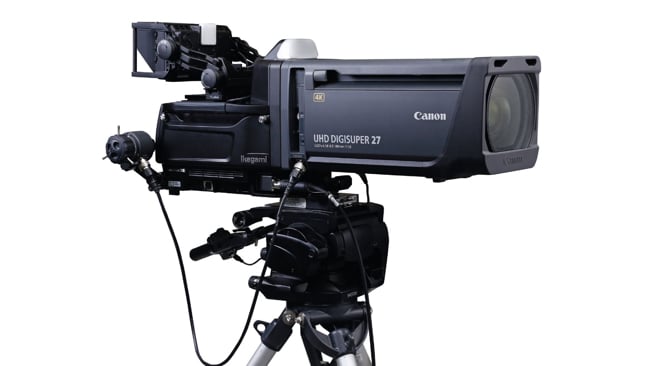 The new UHK-435 is slightly dwarfed by the Canon DigiSuper lens, but is no less significant for it

If there were any lingering doubts that HDR production is now very much the mainstream, new kit including the Ikegami UHK-435, launching at IBC2017 should dispel them.

The new UHK-435 is billed by the company as the world’s first 2/3-inch 3-CMOS sensor 4K/HD studio camera. While they don’t often grab the headlines, even their pictures are dominated by the broadcast lenses that tend to be mounted on the front, these cameras are incredibly important for the TV industry. Most of the live pictures you will ever see come from units like this and, when you consider that modern OB trucks can deploy 30 of them at once, they’re also a lucrative revenue stream for manufacturers.

Usefully, the UHK-435 provides the extended depth of field required for studio and outdoor production and can be used with both B4 bayonet-mount large studio or OB lenses. It can also slot nicely into any production already using the company’s UNICAM XE series peripherals, hinting at an increasingly modular approach to live production kit outs.

In the same way that we started to see a shift a couple of years ago to the majority of broadcast cameras all supporting 4K, so HDR is starting to sweep through the spec sheets. Indeed, the company has even added HLG support into the HD HDK-73 which was launched at NAB, hinting that we’re moving into a ‘HDR first’ market: one where the countries and broadcasters will make the jump to High Dynamic Range before the transition to 4K.

Elsewhere on its IBC stand the company will also be showing a prototype of a new 4K HDR monitor, as well as one of a 4K POV camera designed for robotic or unmanned studio operation.

It also hints at a rather interesting demo that highlights another of the main themes of this year’s show: IP production. A few weeks ago it announced that it has been appointed as a reseller partner for Snell Advanced Media (SAM), which effectively means better technical coordination between the two companies’ products. As a result, it is going to demonstrate camera control over IP between Ikegami’s stand in Hall 12 and the SAM one in Hall 9.

We expect to be reporting on a lot more of this thing once the show itself gets underway on 15th September.