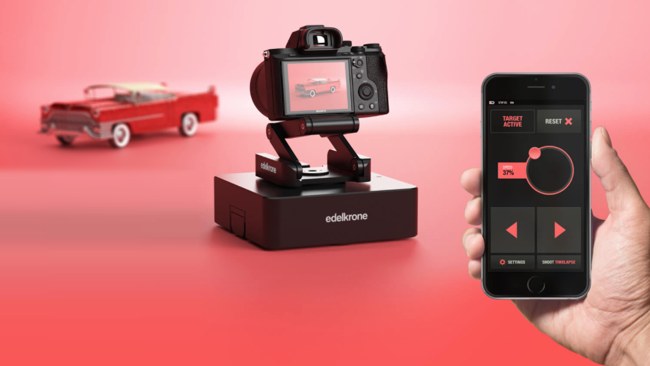 The Edelkrone SurfaceONE, motion control on the move?

For a company that keeps on innovating, Edelkrone shows no sign of slowing down. Single camera operators would appear to have a new gadget to assist them in getting smooth motion shots in the form of the new SurfaceONE.

It cannot be denied that the people at Edelkrone come up with some pretty innovative, and smoothly implemented ideas. Recently the company released its SliderPLUS and Motion kit, enabling a rather staggering amount of automated flexibility when it comes to obtaining portable motion controlled shots.

A lot of the philosophy behind the products appears to be to make the gadgets as unobtrusive to the workflow as possible. Now, it has released a new SurfaceONE 2-axis motion control system. A camera movement product that promises to allow fully CPU controlled camera movement possible anywhere. At least as long as there is a handy smooth surface nearby!.

Designed for cameras up to 6.8kg, using a laser guidance system, the SurfaceONE can easily maintain the correct distance or targeting from an object throughout a movement, once the initial keyframe positions have been set. Moves can include infinitely long slider shots, assuming you have an infinitely long smooth surface, curved arcs and 360-degree shots, or controlled pans. All controlled from within an iOS app, or with the forthcoming Apple Watch app, which has been promised soon. Further thoughts towards convenience come in the form of the easily obtainable Canon E6 style batteries that power the system.

All of these types of shot can be performed as video, or for timelapse purposes, which again can be controlled and timed within the app. The SurfaceONE would appear to be a very interesting product, even though the requirement for smooth surfaces may limit its usability in the real world somewhat. However with a fully computer controlled pan and tilt head, along with height adjustability, for product or macro shots the SurfaceONE could well be just what the doctor ordered in many cases. The basic SurfaceONE sells for $689.99 with additional options such as the FlexTILT head costing $159.99.

Check out the video below, and we’d love to hear what you think in the comments section.