Sony FS7 II: Worth the upgrade?

RedShark Review: RedShark always likes to get several views on important cameras. Here's Simon Wyndham's viewpoint on the FS7 II, an improved version of the very popular FS7 camera platform. Are the changes worth the difference in price?

Incremental changes to existing camera designs are nothing new. Sony has issued minor updates to camera models before. However, rarely has the updated model been available simultaneously with the older one. The FS7 II promises to solve some of the minor niggles users had with the original camera, though the question remains as to whether the changes are worth the $1500 difference in price.

Starting from the beginning.

The FS7 itself has been available since 2014, and it is now a familiar workhorse camera. It filled a gap in the market for those who couldn’t quite stretch to the cost of an F5, and effectively became an instant classic. The low noise 4K picture, wide dynamic range, and high frame rates, combined with useful, but perhaps not perfect, ergonomics, conspired to create a camera for all occasions. The Sony E-mount system further cemented its usefulness with the ability to adapt easily to any lens type.

Such is the ubiquity of the FS7 that you would have to have been living under a rock to have avoided coming across one. However, despite its usefulness as a production tool, as with any product, there were various little niggles that needed ironing out. Hence the FS7 II.

The king is dead, long live the king.

The thing that has many people puzzled about the FS7 II is why it hasn’t replaced the original FS7 on the stock shelf.  After all, it is a succeeding version of the camera, isn’t it? Actually no. Apparently the FS7 II is in fact an upper tier version. The best way to think of it is like a car model. You can have a Skoda Octavia in S trim for example, but within the same model range of car, you might have a slightly better featured version in the SE trim level for instance. Same engine, same overall structure. Just a few bits and bobs extra.

Therefore the FS7 II isn’t a MkII so much, but an FS7 with a slightly better ‘trim level’ than the original camera.

Now that we have established, and hopefully cleared up some of the reasoning behind the FS7II, just what are the differences between this and the earlier model? Take one glance at the newer camera, and superficially they both look the same. And you’d be right in thinking so. Externally there is very little difference, but look more closely and some of the differences become apparent.

For starters, the lens mount has changed to a locking collar rather than a twisting bayonet system. This has both advantages and disadvantages. On the positive side the new system means that heavier lenses can be mounted much more solidly, and on your existing lighter lenses there is also far less chance for play. The downside is that it is slightly more fiddly to swap over glass. In practice, I did not find this as fiddly as some others may have mentioned. Certainly it requires a bit more finger coordination if you are handheld, but I simply found that it required a different knack to do. Once you are used to it I do not see why it should be any more or less of a hassle than the original system. Collar locking lens mounts are nothing new, and if all I have to do is readjust my coordination in return for a much stronger mount, then so be it. 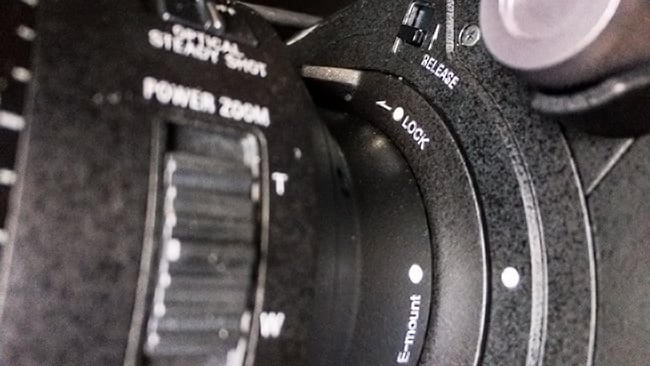 The new collar locking mount on the Sony FS7 II

The second main addition to the FS7 II is the electronic variable ND filter, taken from its smaller sibling, the FS5. The dial for this is on the side, just below the physical ND selector knob. To use it you need to make sure that the dial is switched to ND mode, rather than iris, since the control does double duties. You will also have to make sure that you have at least one of the ND filters selected on the main ND selector. From then on you can adjust your ND in infinitely smooth increments. This is an incredibly useful thing to have. It means that you can choose the specific f/stop that you wish to work with, and then fine tune your exposure without affecting the depth of field.

If I could name some downsides to this, it would be to say that I am not a fan of adjusting exposure using a tiny wheel, and that there was a slight delay between turning the control and seeing the result on screen. That said, I would much rather have this option than not. So much so that I found working with set position ND filters rather crude afterwards.

For documentary making, the variable ND will be highly useful. I would much rather edit around a smooth exposure ramp than have a hideous step ND change mid-shot. it also means your exposure change can be done with one control, as opposed to having to change the ND knob, and then fine tune the iris afterwards, possibly missing or ruining the shot in the process.

The FS7 II has four more user assignable buttons than the original camera. This could be useful for some. From a personal perspective, and from the standpoint of a person with the memory of a sieve, I can never remember which functions I have assigned where. However, for the more agile minded amongst you, these could save you some menu juggling. Although most of the important functionality of the camera is already taken care of by the preset buttons and switches.

The last main change to the camera is the way that the LCD attaches to the body. Previously Sony used a rod with a round cross section. This has now changed to a square one in an effort to prevent the LCD from drooping. This has solved an issue of the viewfinder sagging in one direction, however, because the rod that connects the assembly to the body is still circular, the LCD can still gradually drop downwards, prompting the need to regularly lift it back up into the position that you want.

The LCD loupe construction has been improved over the older model, and there is also now a solid, closable sunshade that can be attached instead. This is a nice way of working, and I find that generally, I don’t use a loupe these days anywhere near as much as I used to do with ENG style cameras.

Along with the above changes, smaller additions include a power LED next to the power switch, and the fact that the XQD cards now stick out a few millimetres more to make them easier to grab hold of when they need to be removed.

Do I need one?

The FS7 II has courted a bit of criticism from some quarters because the changes are generally very small compared to the difference in price. The internals are the same as the earlier camera, so there is no gain in picture performance or frame rates. So the question to ask is whether you need to pay the $1500 over simply purchasing the original version?

If you already own the first version of the camera, the answer, generally, will be no, you don’t. But if you are making a decision from scratch, then you need to ask yourself a few questions. Chiefly whether you would gain from the strengthened lens mount, and the variable ND. Certainly you could buy an aftermarket variable ND, but then you could suffer from unwanted effects as the filtration strengthened.

$1500 is a lot to ask for such an incremental convenience, but it may just be that it makes your working life a lot easier. The FS7 II remains an excellent camera, with current best in class performance. However, it is also puzzling as to why it simply didn’t replace the original model on the stock shelves.