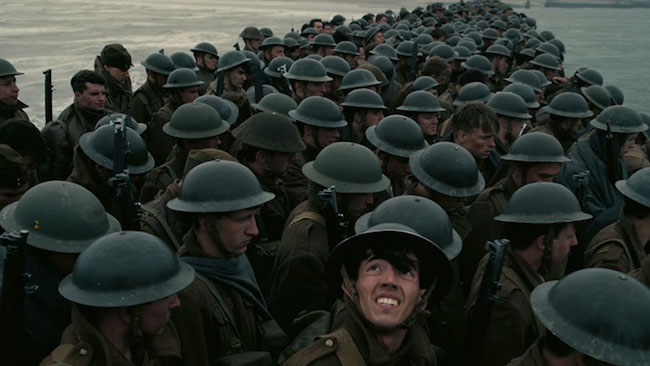 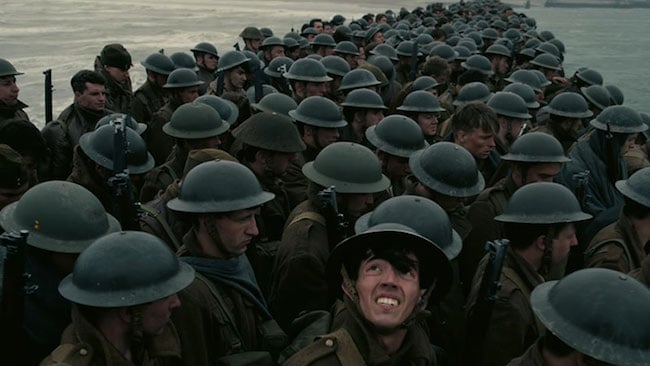 Dunkirk was shot entirely on 65mm

Christopher Nolan's forthcoming Dunkirk is notable for a lot more than simply featuring Harry Styles: it's also Nolan's first film to be shot entirely large format - and that includes a lot of handheld IMAX shots with a 54lb camera.

In perhaps one of the greatest feats of accidental marketing, Dunkirk the new movie from Christopher Nolan is getting a lot of attention for featuring Harry Styles (from boy band One Direction in case the reference passes you by) as a lead actor in the movie. However, the movie has another great marketing angle too. It is the first movie from Christopher Nolan to be shot entirely on large format film. The film was shot entirely on 65mm film negative with projection on 70mm and IMAX 15/70 film prints in mind as the destination.

On previous films (such as Interstellar and The Dark Knight Rises) Mr Nolan has often mixed shooting on IMAX 15/70 with 35mm film because the IMAX film cameras can be quite noisy, making it harder to shoot dialogue scenes. For Dunkirk, however, the film has been shot almost entirely on 15 perf IMAX with some 5perf 65mm cameras being used for the dialogue scenes instead. This has been partly achieved this by having very little dialogue and instead focusing on the action and visual storytelling.

Having a film with minimal dialogue shot on IMAX cameras might be seen as enough of a challenge but Christopher Nolan doesn't believe in making filmmaking easy. He is quoted as once saying:

"For years, filmmakers who wanted to shoot digital would promote the fact that the cameras are lighter, easier or whatever, but my response would always be, If David Lean, or rather David Lean’s crew, can put a 65mm camera in the desert, why should I care that your camera is lighter, unless you’re doing something with it you couldn’t do before.”

In other words, it's about the finished product and making something great and if that requires going to great lengths to achieve... then so be it.

To that end, Nolan decided to push IMAX further than has been done before by shooting far more of the film handheld. That's right, whereas Star Trek - Into Darkness largely kept the IMAX cameras mounted on technocranes to make them more mobile in spite of the size and weight, director of photography Hoyte Van Hoytema often operated the huge 54 pound (24.5kg) IMAX camera handheld. Although I suspect he had some assistance with the weight, as the behind the scenes shot from Interstellar shows because the camera really is something of a monster — especially when you consider the additional weight of the film magazine when fully loaded. 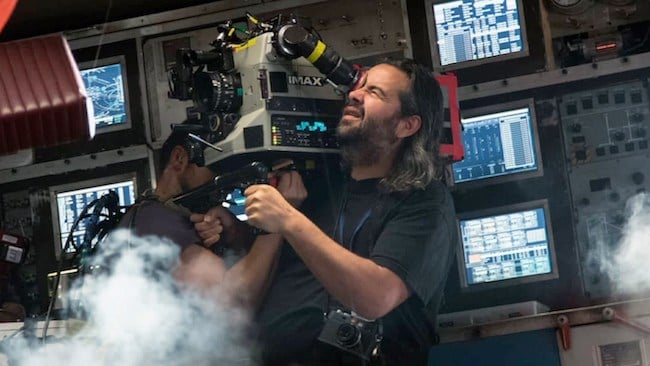 Christopher Nolan had this to say about the shooting of Dunkirk:

"Hoyte hand-held the [IMAX] camera for a few sections of Interstellar very effectively, and then on this I had to break the news to him that he was going to be doing it for a massive amount of the film. We definitely bought him a lot of massages along the way"

You are probably thinking that even three and a half minutes isn't even that much run time but Nolan tends to make up for the short run times of the IMAX camera by having a complete camera on standby already loaded with film so that they can just swap over cameras at the end of a reel instead of having to take the time to reload the camera.

As the film is more about the characters, the story and the action than the dialogue, the ability for the IMAX camera to move quickly in order to follow the action was really helpful. Nolan went as far as to say it made the film more intimate:

"The shooting style allowed for an intimacy not typically associated with IMAX. We could get on a small boat with a number of characters and just shoot IMAX as if we were shooting with a GoPro camera"

Aside from the use of handheld IMAX, Dunkirk also used a few other methods to keep the camera mobile. These ranged from the aforementioned technocranes to the far more primitive trick of mounting the camera to one of the stretchers, and of course traditional tracking shots. This probably helps to vary the kind of camera movement in the movie while always staying with the action.

Dunkirk is the shortest movie directed by Christopher Nolan other than his debut film "Following" which was about 70 minutes long. Dunkirk runs for a respectable 1 hour and 46 minutes which is probably a good length in terms of not allowing the continuous action to lose its impact and to make it easier to ship all those heavy IMAX and 70mm film prints to cinemas all over the world.

Warner Bros. is claiming that this will be the widest 70MM film release in 25 years. It seems like 70mm film presentation has been quietly expanding again since Paul Thomas Anderson screened his 2012 epic "The Master" (shot mostly in 5/65) at 14 70MM capable cinemas. For his previous film "Interstellar" back in 2014 Christopher Nolan had a release on 50 IMAX screens. Dunkirk is expected to open in 70MM at 125 locations. Quentin Tarantino's The Hateful Eight played in 70mm on 100 screens back at the end of 2015, so this is an even bigger release for large format projection than that achieved; Dunkirk seems to have really benefited from the momentum created by Quentin Tarantino's effort to bring back 70mm projection.

As I write this, the first responses from film critics to previews of the film are just coming in and so far everyone has been overwhelmed at what an amazing experience the film is...

...and for those still wondering apparently Harry Styles does a great job acting in the film too.