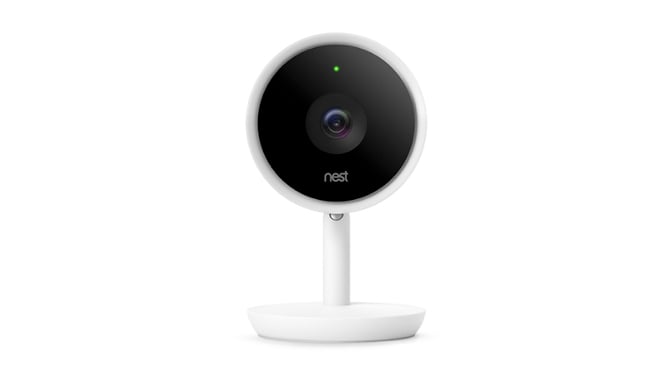 The Nest Cam IQ security cam: not too long ago this was as high end a spec as you could get

Even security cameras are now making use of 4K sensors and advanced technology. The Nest Cam IQ from Nest which is a subdivision of Alphabet (Google’s parent company) has a 1/2.5-inch 4K sensor and a six core Qualcomm CPU.

Although the camera has a 4K sensor it is designed to only produce 1080p streams but it makes full use of the 4K sensor for it's digital zoom feature. I say "only" but obviously 1080p is actually very high resolution video and a lot of data to be streaming to start with, so there is a matter of practicality to be considered as the camera only works over WiFi.

The camera can use facial recognition software to detect and track the faces of people and when it does so it records two streams simultaneously. One of the streams will be zoomed in on the person’s face using the 4K capability of the sensor to retain as much detail as possible. Apparently it can achieve a maximum of up to 12x digital zooming. This is where the advanced multicore processor comes in, as it does a digital zoom and records two streams at the same time which is obviously going to be a bit processor intensive (although apparently the Nestcam IQ isn't making full use of the six core processor even then and Nest intends to make use of the extra capacity in the future via software updates).

The facial recognition software allows the camera to detect whether a person is already known or a stranger. In fact it can let you know who specifically was at a location if it knows them already and if not can let you know that it was a stranger at the location. It can also detect people as distinct from other objects or animals, can track the person as they move around and can give you a zoomed-in image of their face using the 4K resolution to provide a sort of "enhance" function of the kind you see in movies.

The audio side of the camera is also intelligent and can detect people talking as opposed to dogs barking or your cat knocking things over. There is even a speaker in the camera so that it is possible to talk back to people at the location as well.

You can get a live view from the camera on your smart phone, so you can check in on what is happening somewhere at the time.

The camera even has a standard Tripod mount.

The camera itself costs $299 and a pack of two cameras is $498, so definitely not the cheapest security camera on the market but an interesting look at the state of the art for this kind of technology nonetheless.