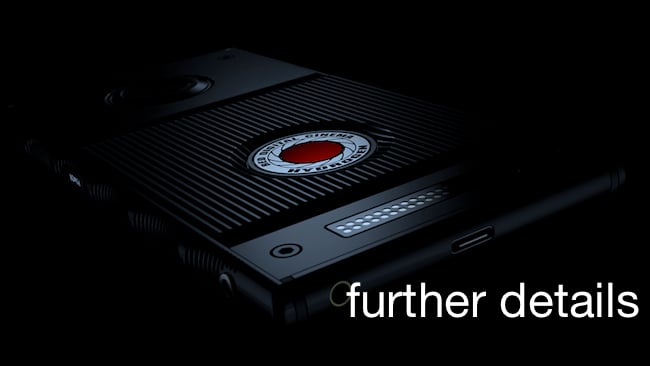 A couple of hours after Hydrogen’s announcement, RED head honcho, Jim Jannard, took to his habitual REDUser platform to fill in some rather interesting details.

“So… very interesting day to say the least. I love some of the reactions,” Jannard typed to begin with. “In no particular order, let me take a few swings here.”

What followed was a brief post that attempted to put some flesh on the bones of what was a very adroit but also slightly short on detail press announcement.

To start with, he addressed the holographic display: its impact on those who see it and — and this is an important bit — that it is not lenticular.

“It is incredible. It is multi-view (4-view) as compared to stereo 3D (2-view). Watching shocked faces light up when people see it is really motivating. There is no good way to describe it until you see it. Hopefully, we will get some sceptics eyes on it soon… then they can tell you.

“Our display is technology you haven’t seen before. It is not lenticular, which is inferior tech in every way, has been tried many times before and failed for good reason. (see Amazon 3D Fire, LG Optimus, etc). Lenticular display dramatically lowers resolution, cannot be turned off for standard 2D content, only works in one direction (usually landscape), has color crosstalk… to name just a few issues. My bet is that other “big” companies will try to re-package lenticular 3D displays with eye-tracking in response to our program. Don’t fall for it.”

Hopefully, people will get to see this quite soon. If RED is serious about getting Hydrogen in people’s hands by the end of Q1 next year (even if it is only promising to ship units from Jannard’s own “personal first production batch” with scaled up production coming along afterwards) it only has eight months to get this thing up and running.

Could it leave it as late as CES or MWC next year? It could. Despite some of the interesting details such as the fact that Hydrogen is going to integrate somehow into the established RED camera ecosystem as a user interface and monitor (albeit at 5.7in a fairly small one) this definitely feels like a tilt at a new market for the company.

Jannard sort of confirmed this too.

“So why do we feel we can make a difference in the cellphone market? Because we are doing everything different and (we feel) better. That is the only way to enter a market. That was the thinking behind Oakley. It was the thinking when we released the RED ONE. Same formula. Make something significantly better and you have a reason to be.”

It’s a big market to go after with some very big fish — Apple and Samsung to name but two — swimming in its waters. So you have to be bringing something rather more to the party than simply a souped-up Android device.

Luckily, above and beyond the display, Jannard reckons that RED’s imaging heritage does just that

“It also comes with internal storage and an external micro SD card slot. And a headphone jack. A selfie camera and a back camera. These cameras will not produce cinema quality images. No cell phone does. What we will have is a modular system that adds image quality well beyond any other camera short of our professional cameras. Remember that we have a lot of elbow room on this front. Our Weapon Helium sensor scored 108 on DXOMark.com That beat the Sony A7RII by 10 full points.”

And that, for the moment, is that. Jannard says that RED will be releasing many more details and specs about the project as time goes along,

“Today we saw the full range from “complete trust” to “hard skepticism,” he concluded. “I have seen this before… many times actually. Makes me smile.”