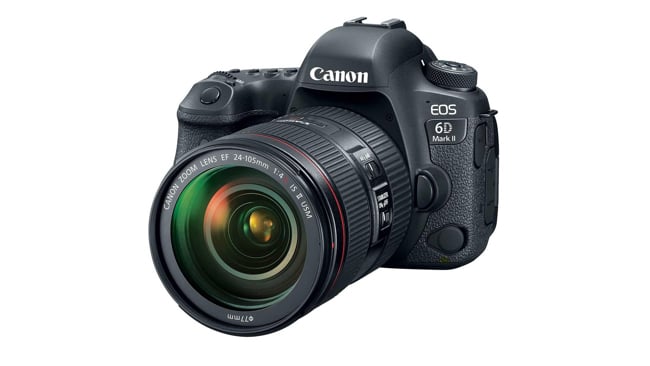 There’s not much to excite in the way of video, to be honest, but Canon’s two new DSLRs, the EOS 6D MarkII and EOS Rebel SL2, both widen the company’s entry-level line-up and introduce innovations of their own.

The EOS 6D Mark II is possibly the most leaked camera in history, with details of its spec sloshing around the internet for what seems like a ridiculously long time now.

The excitement about its introduction is probably due to it being the first time the camera has been updated since the original was released back in 2012 and it now probably sits in the Canon line-up somewhere below the 5D MkIV. It’s more affordable at $1999, it’s slightly smaller, but it is also full frame. In fact, it’s got a rather lovely brand new 26.2 Megapixel full-frame CMOS Sensor at its heart coupled with the increasingly ubiquitous DIGIC 7 Image Processor that means the unit can shoot anywhere between ISO 100-40000 and handles burst up to 6.5fps.

The optical viewfinder has a 45-point All Cross-type AF System and the 6D MkII also uses Canon’s Dual Pixel CMOS autofocus system. It is also the first full-frame body in the EOS range to ship with a vari-angle touchscreen display.

All in all, then, it’s quite a capable wee unit, the only real disappointment being the video spec. 4K is available in timelapse, otherwise you’re limited to Full HD, albeit at up to 60fps and with the option of digital five-axis stabilisation.

We’ve been round the houses with this argument before with Canon and 4K. No, video is not the target market for the EOS 6D MkII, but when the format is supported on the latest smartphones it is still vaguely disappointing not to see it on a $2000 camera. 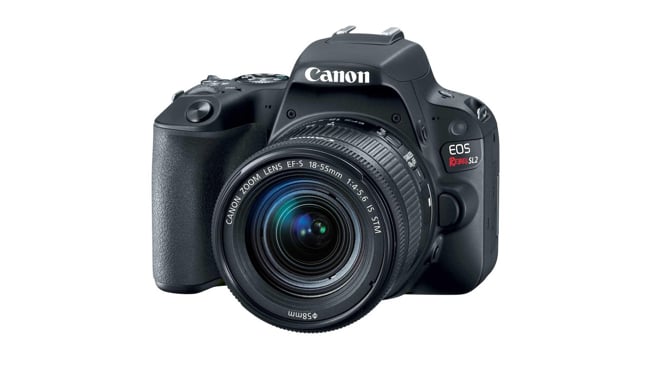 And it’s appropriate to mention smartphones as this is precisely where it feels the EOS Rebel SL2 is aimed, Canon talking about how “stepping up from a smartphone or point-and-shoot camera for photography can be intimidating” and featuring various UI tweaks and more to help new users get to grips with the increased functionality.

This is an overhaul of 2013’s Rebel SL1 unit and adds a 24.2 Megapixel CMOS APS-C-type sensor into the unit’s small and lightweight 390g body (with battery and memory card onboard), as well as the DIGIC 7 processor, though this one tops out at ISO 25600 with a burst of 5fps.

AF is 9-point and Dual Pixel, while it too features a vari-angle LCD touchscreen. Video is limited to Full HD 60fps, though again it can take advantage of five-axis digital image stabilisation. A built-in intervalometer lets users experiment with timelapse.