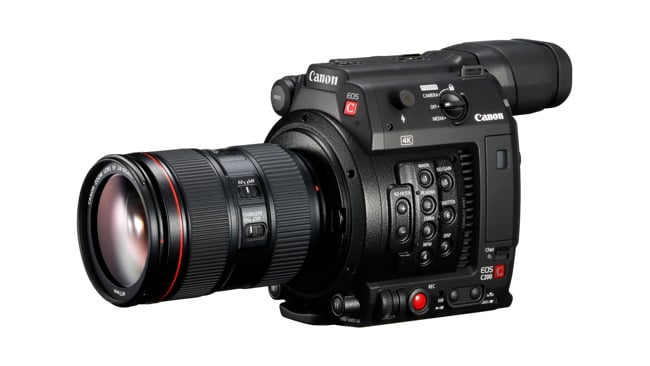 One of the main talking points of the new Canon EOS C200, apart from its price, has been the new Cinema RAW Light format. New Canon documents have shed some light on its details.

Open up the media doors on the back of the new Canon EOS C200 and you’ll see two dual SD cards, which is only what you’d expect from a camera that’s looking to appeal to the professional market nowadays. What is perhaps a bit more unexpected is the CFast 2.0 card slot you’ll find on it too, which hints at the real internal innovation going on with the C200: Cinema RAW Light.

That’s not to say those dual SD card slots are going to be redundant. Using a 4:2:0 8-bit file format, Canon’s been able to capture a 150Mb/s 3840x2160 image at up to 60p using Long-GOP compression to them (and crank it up to 120P in Full HD). That gives productions access to a lightweight, MP4 wrapped and H.264 encoded 4K file that eases the transition to the format with minimal impact on the backend.

For those that want a bit more, though, there’s the CFast slot and RAW Light. Canon claims that Cinema RAW Light processing is “designed to provide the same high resolution, high color depth, and wide dynamic range as our previous RAW structure but at a dramatically reduced data rate of 1/3 to 1/5.”

Quite what that means for picture quality we’ll have to wait and see until review copies start circulating, but it certainly has captured rather a lot of attention. A 1Gbps throughout is comparable with ProRes 4444 XQ, and the camera can capture 4096x2160 12-bit Cinema RAW Light up to 30p, and 4096x2160 10-bit Cinema RAW Light at 60p.

All of which means that if you have a pocket full of 64GB CFast cards, you’ll have to be swapping them out roughly every five minutes if you’re shooting 23.98p. At $200 a pop you have to hope you have a DIT that’s on the ball handling all those.

Okay, so handling the MP4 files produced by the camera is not going to be any great mystery, but there are some interesting quirks brought about by the RAW Light format.

The first is the appearance of a 2K proxy file. These are MP4s too, but only produced when recording in RAW Light so that offline work can continue immediately. many people that have been in the industry for a long time will shake their heads in slight disbelief at the thought of a 2K proxy, but that’s progress for you.

Then we have the RAW Light file itself. One thing worth pointing out here and now is there is no RAW output on the C200: if you want to record RAW you can only do it internally and only via RAW Light.

It’s worth pointing out that this does not have the frame-by-frame file structure of a traditional RAW format. Instead, it uses a new proprietary format to encode the RAW information into a single Canon RAW Movie file, or .CRM. This then, of course, needs to be unpacked, which is no doubt why Canon has been working quite so assiduously with a decent number of third-party NLE vendors to make sure there are a range of post options available.

We’re going to hand over directly to Canon here and a detailed post on its Digital Learning Center, because the explanation of all this is a bit complex and they do a good job of getting it all across.

“Once a Canon RAW Movie is recorded, it then needs to be unpacked in one of two ways. The first and more traditional route would be utilizing an updated version of Canon’s RAW Development Software. At its core, this software allows for the unpacking, modification, and debayering of Cinema RAW Light files. Modification is the key phrase here, as we have the opportunity to modify the parameters by which our footage is debayered. EOS C200 captures its RAW information in a proprietary RAW Gamut and RAW Gamma. This data needs to be taken from their RAW spaces, and conformed into one of the many gamma curves or color spaces to begin the post production process.

“The footage from the EOS C200 can be conformed into a wide range of spaces, from Cinema Gamut down to BT.709, and from Canon Log 2 to Wide DR. The choice is yours and dependent on the amount of post production resources you’re planning to allocate. However, if you are shooting in the RAW format presumably you’re going to want to take full advantage of the information captured utilizing a combination of Canon Log 2 and Cinema Gamut. This Canon Log 2 and Cinema Gamut combination is the most ideal starting point for an HDR workflow, providing the full 15 stop dynamic range the sensor has to offer, as well as the widest range of encoded colors.”

The RAW development software can also transcode RAW Light into different file types, such as ProRes 4444,10-bit and 16-bit DPX, or OpenEXR for a close fit into an ACES workflow (the software allows for the proper ACES IDT to be applied to the debayer).

Plug-ins are also on the way to allow popular NLE and grading software to accept the files natively. This is potentially where things get really interesting, as the sheer amount of metadata packaged into the format is going to make vfx work a much smoother process.

“Imagine a world where we can shoot 12-bit high data rate media, ingest it into our NLE, and be able to change key factors on the fly such as white balance or color space,” concludes the Canon piece. “This is where Cinema RAW Light becomes more than a codec, and instead a malleable format within your NLE that allows for seamless creation of different compliant passes easier than ever before.

It’s not quite the conclusion though. While the EOS C200 is shipping with MP4 and Cinema RAW Light formats all popped and ready to go, a future firmware update will add the ability to record UltraHD and FullHD to Canon’s purpose-built XF-AVC codec inside an MXF OP-1A wrapper. This will allow in turn a fair degree of metadata to be captured to the file, and viewed using the Canon XF Utility software (as employed by cameras like the EOS C300 Mark II and EOS C700).

And you get the sense that even that might not necessarily be the end of things. The EOS C200 is a lot of camera for $7499 and, with HDR and ACES workflows and more, Canon seems to have thought long and hard about safeguarding its future proofing. As we've said before, we’re really looking forward to seeing the images it produces.