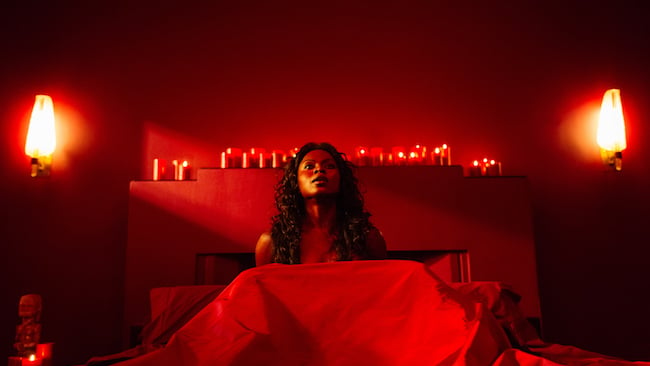 Bilquist from American Gods: Even more stunning in 4K

Having spent over a decade writing about HD before making the jump to actually buying a set, I decided to hitch up to the Ultra HD bandwagon a bit earlier this time round. So, what’s it like having 4K in the home?

In a word: awesome.

And here are another interesting two words for you: surprisingly cheap.

While many people assume that RedShark writers are bathed and cosseted in technology supplied on test by grateful manufacturers, this is sadly not the case. So, having to buy everything on a journalist’s wages, meant that the TV that now graces the Stout living room is no top of the range set but a comparatively lowly Samsung UE55KU6400.

That said, £650 is more than I’ve ever spent on a TV before. But all the same, this is 4K. This is HDR. I thought it was all going to be a lot more expensive than that.

To be honest, the main drive here was to get a bigger screen to play Zelda and watch some rugby on. The 4K and the HDR was a bit of an added bonus. And there are probably better-specced screens out there too; I’m no A/V snob and tend to champion content over anything else. But it has to be said, hook it up to a 4K service and the pictures are stunning.

The first thing watched in UHD was an episode of Netflix’s Chef’s Table and the effect was genuinely jaw-dropping. As the camera panned over the treetops of the South Korean forest near Buddhist monk Jeong Kwan’s temple, the effect was akin to watching something in stereo 3D. The detail and the vibrancy of the colours was astonishing.

There was nothing for it but to instantly upgrade the Sky box too to the Ultra HD supporting SkyQ.

Live the pictures are good. Watch something like Formula One and you see a difference, though not perhaps as marked as expected. The Samsung set automatically uprezes HD content to a 4K resolution and the difference between the two — the uprezed HD and the live native UHD — is often something you have to ratify by checking the bug in the corner of the screen in a 'Is this 4K? Oh yes, of course it is' sort of way. It’s worth doing, but the satellite compression probably washes out some of the top end quality.

Download content though and you're back into the full immersion experience. Play the opening frames of The Martian for instance, and you genuinely do feel like you could reach out and touch the peaks of the Martian landscape as you fly past them. Back on Amazon, American Gods you feel has found the format its rich imagery deserves. It's a hyper-stylised, sumptuously graded, visual firecracker of a programme: one of the handful that adroitly validate the argument that television is indeed the new cinema.

Ultra HD content looks fabulous and you find yourself hunting it out. “Is that in 4K? Oh, I’ll watch it then.”

It’s probably not quite the extreme step up that the transition from SD to HD represented, but it does bring a whole new realm of high-quality imagery into the domestic environment. The only thing I've seen better is on a grading monitor in a Soho grading suite.

And, even better, an uprezed Zelda looks fantastic…