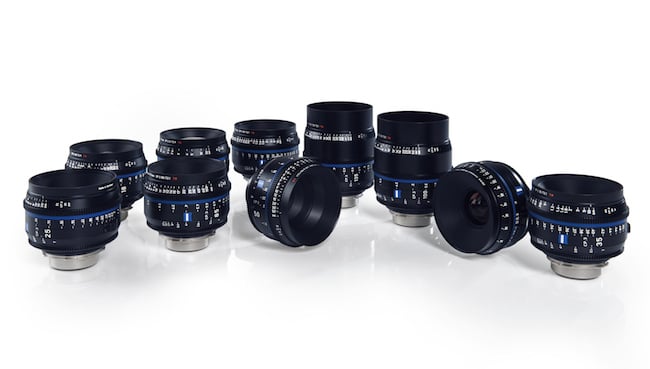 The new Zeiss CP.3 range - shipping as from June

CP3- oh! The new Zeiss CP.3 lenses are slightly more expensive than the preceding CP.2 glass, but they are also a major upgrade because the lens mechanics and physical consistency are such an improvement. In other words, Zeiss looks to have a winner on its hands.

The Zeiss compact primes get really compact in their latest version of the Zeiss CP.3 where the front of the lens front diameter drops from 114mm all the way down to 95mm. It’s not the only improvement that has been made to the lenses, however.

Zeiss obviously looked closely at the CP.2 lens set and has tried to improve them in as many ways as possible. It's done rather a good job too. The new lenses are lighter as well as smaller and more consistent in their size. Most of the lenses weigh around 1.8-1.9 lbs and all the lenses are now the same length, with the exception of the 100mm and 135mm primes which are a bit longer. The CP.2 lens set had four different lengths, so this is a big improvement.

The entire new set of lenses covers the full frame. Previously, the 18mm CP.2 did not, but this issue has gone away with the CP.3s and now the full set of lenses start at 15mm, which is really quite wide on full frame sensors. There are ten primes in the complete set and they are all colour matched. Zeiss has tried to also make the T-Stops match as closely as possible, although the wider lenses have to be a bit slower. The 15mm, 18mm and 21mm lenses all have a maximum T-Stop of T2.9. All the other lenses are T2.1, right up to and including the 135mm lens.

Visually it’s the same glass inside the CP.3 lenses as in the older CP.2 sets, but there are new and improved lens coatings and the mechanics have been massively upgraded, giving much smoother focus. There is much less friction in the lenses, so focus motors will require much less torque to operate. This alone makes the upgrade from CP.2 to CP.3 worthwhile. The new lenses use the helicoid design from the Ultra Primes and the ball bearings system from the Zeiss Master Primes. Focus rings are also now all in the same position, making it much easier to swap out lenses quickly. There are great optics available in stills lenses but you have to pay a lot more to get the more sophisticated mechanics in cinema primes, so the CP.3 lenses are a huge upgrade over the CP.2 lenses.

Lens mounts are interchangeable on the CP.3s as they were on the CP.2s, but this is supposed to be an even easier procedure on the new lenses and switching from one to the other should be easy to do by the user in the field as opposed to having to send the lenses back to a service centre somewhere. Available lens mounts are PL mount, Nikon F, Canon EF, Micro Four Thirds or Sony E mount.

The new CP.3 lenses are going to be available in two versions: ordinary CP.3 lenses and CP.3 XD lenses. The latter comes with Cooke /i data connections and an extra lemo-socket that can output extended lens data. This extra data provides information about the lens’ distortion and shading characteristics in real-time.

The idea behind this isn’t just that you will have extra metadata recorded in post that might be useful, but that you can manipulate lens characteristics in real-time on set. The latest version of Pomfort LiveGrade Pro software not only displays lens data but also has sliders that let you immediately adjust shading and distortion. This means you could make the lens output appear more or less rectilinear depending on what you think suits the mood of the scene, or you could stretch out spherical bokeh to make it look more oval and anamorphic. To apply recorded lens characteristics in post production, Zeiss provides an OFX plug-in. Initially, the plug-in works with Blackmagic Design DaVinci Resolve grading software. Support for other grading, editing and compositing software will be available in the future. The ZEISS eXtended Data technology is planned to be expanded in future to offer additional features. ZEISS will, therefore, offer lens firmware upgrades.

Of course, there are also the standard Cooke /i data connections on the lens mount of the XD lenses that provide compatible cameras with standard lens metadata to record.

The Zeiss CP.2 lenses were a huge hit, giving smaller productions access to Zeiss-made glass with reasonable mechanics. The new CP.3 lenses are slightly more expensive but they are a huge upgrade because the lens mechanics and physical consistency are such a huge improvement. Zeiss has once again tried to reach the market that wants cinema lenses for lower budget productions. To that end, they have made the lenses available without data connections for a lower price. It’s hard to imagine that the much-improved lenses won’t be more popular than their predecessors, but the world isn’t always logical like that, so we will have to wait and see.

Prices range from $4390 to $7490 per lens for the CP.3 series, while the CP.3 XDs are $1400 more expansive. The lenses start to roll out from June onwards, though dealers do have a limited stock for more immediate availability.