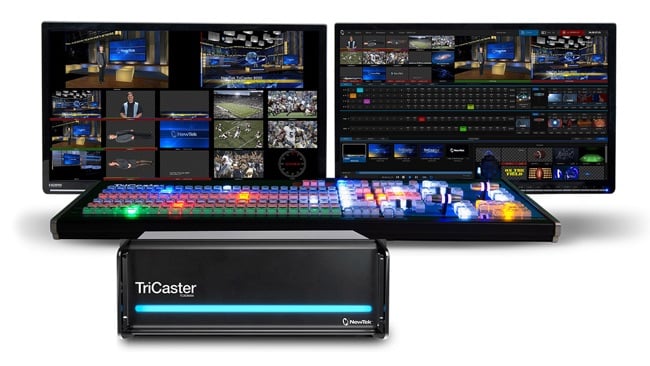 One of the cooler stories from last week's NAB that may have passed many people by was the interesting annoucement that the latest camera to receive support from Newtek is the JVC KY-PZ100. Production can now get seriously remote

The NewTek tricaster is perhaps best known for its incredible virtual studio system, which creates virtual studios that even feature virtual reflections and other incredible digital magic all happening in real-time, but you can also use the system as a more conventional camera switcher and NewTek is expanding this capability by adding more support for robotic PTZ cameras.

The latest camera to receive support from Newtek is the JVC KY-PZ100. The Tricaster can control the KY-PZ100 camera over Wi-Fi and 4G LTE in addition to LAN and RS-232/422. The JVC KY-PZ100 has silent direct-drive motors that allow smooth camera movements (Pan, Tilt and Zoom of course!) without making intrusive sounds in the audio. Camera movements are possible at variable speeds from very slow to very fast while maintaining accuracy of positioning. It’s even possible to carry out all 3 kinds of movements at the same time, so you can pan and tilt while zooming at the same time.

This capability isn’t a lot of use in the virtual studio system where actual cameras are fixed and the system makes virtual cameras move, but in a situation with actual practical sets — perhaps interviews in a practical set, for example — the cameras can add some basic camera moves without having camera operators on each camera. All the cameras are controlled from the Tricaster instead. In fact, given the fact the cameras can be controlled over IP, it’s possible the cameras could be anywhere in the world and still be controlled from the Tricaster. Perhaps a camera looking out over the city skyline, for example! The camera even features a fast f1.6 lens and a “night mode”, so perhaps you can even shoot the skyline at night. It’s another one of those things where its use is down to your imagination and I’m sure people will come up with some very creative uses.

Tricaster support requires the latest firmware for the camera, which is available right now.