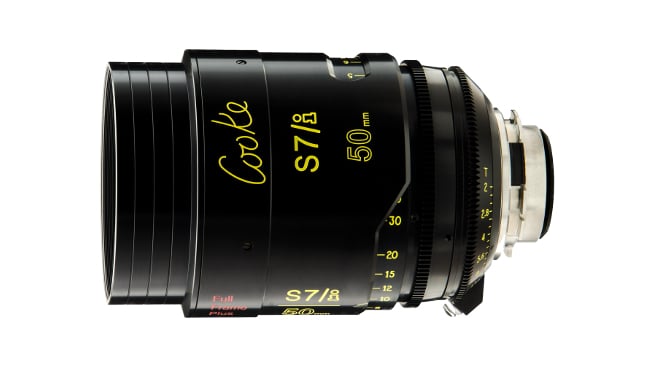 Unexpected news from premiere lens manufacturer Cooke, who has released a new set of lenses, the Cooke Series 7, that can cover all the way up to the full sensor area of the RED Weapon 8K.

A new lens series from Cooke is always big news although lately it’s been getting hard to stay on top of the Cooke announcements as you can now get the Cooke look in Anamorphic, Spherical, and Vintage variations, in addition to the very welcome return of zoom lenses to the Cooke line up. It’s obvious that Cooke is going to really need that new factory capacity it has recently added.

Lens coverage for the new Cooke S7/i lenses is up to 46.31mm in diameter, so the lenses can be used on cameras with larger sensors than full frame too, such as the Phantom 65 and Red cameras with the Red Vista Vision 8K sensors. Sensors larger than the Super 35mm are becoming more common in cinema applications, thanks to the DSLR revolution and cameras such as the Canon 5D and more recently the Sony A7s, so it makes sense that high end cinema lenses are arriving to match the camera sensors.

Of course it’s possible to use the new lenses on more conventional Super 35mm cameras too in addition to the larger sensor cameras, so the new set should prove to be very flexible.

It remains to be seen if the lenses will cover the full sensor of the Alexa 65 but it is expected that it should at least manage to work with the lenses in the 16:9 mode of the camera. The lenses are colour matched and should intercut with the current range of Cooke lenses just fine. i.e. the Anamorphic/i, S4/i, miniS4/i, 5/i and Panchro/i Classic lenses

The new lenses will initially be available in a set containing the following focal lengths: 18, 25, 32, 40, 50, 75, 100 and 135 mm. All the lenses share a common front diameter of 110mm so will play nicely with Matte boxes when making quick lens changes. The maximum aperture is also a fast T2 across the entire set and all the lenses stop right down to T22. The lenses all have a Cooke /i interface for lens metadata information.

The lenses are expected to start shipping in June 2017.

You can see some footage from the new lenses below.