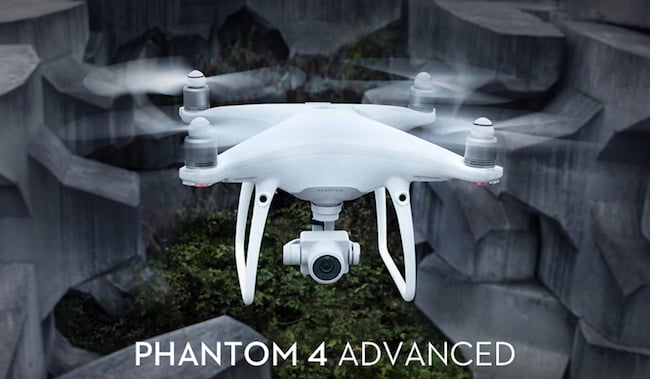 Another Phantom: UAVs are now on a faster upgrade cycle that mobile phones

DJI has added another model to its seemingly endless variations of the Phantom UAV. The Phantom 4 Advanced adds a number of very useful functions, while possibly leaving those who invested in the Phantom 4 Pro scratching their heads!

The Phantom 4 Advanced takes away the rear obstacle sensors that are featured in the Pro model, which means that one of the flight modes, Tapfly Backward, has been removed. The Advanced model also lacks the 5.8 GHz frequency band. However, the front obstacle avoidance capability has been increased to 30m. It also retains the dual IMU sensor redundancy for safety.

The new Advanced model retains the large 1” 20MP chip of the Pro. The camera also sports a real iris, that goes from f/2.8 to f/11 with a 24mm equivalent focal length. Further still, to help eliminate rolling shutter effects, it also features a mechanical shutter. Video-wise it is now capable of 4K @ 60fps in H264, and 4K @ 30fps in H265 modes. Both going up to 100Mbps bitrate. Whilst 100Mbps may not be high enough still for some users, this is still a far cry from the extremely paltry 60Mbps that is still on the current Inspire 1 and Mavic models.

With a huge range of new flight modes that, for all intents and purposes, take the skill out of achieving great looking shots, and the Phantom 4 Advanced looks very tempting indeed. In fact existing Inspire 1 owners may well be wondering what to do with their current systems. After all, while the Inspire still offers the advantage of a 360 degree camera rotation and the option of having a separate camera operator, and very expensive alternative camera options, the new Phantom flight modes and camera system negate these to a large degree now.

With a claimed flight time of around 30 mins vs the Inspire 1 at a max of around 15, and much more portability, and the latter is now starting to look rather tired. Despite only being 3 years old. Technology waits for no-one, and aside from the hassles of gaining a commercial license, with all the choice on offer, owning and flying a drone is really now a requirement for all video production companies, not an option. The Phantom 4 Advanced would appear to take properly usable video quality and stills from air on a budget a step closer. But the extremely minor differences between this and the Pro model are rather perplexing!