The portable gear you need to shoot really lightweight 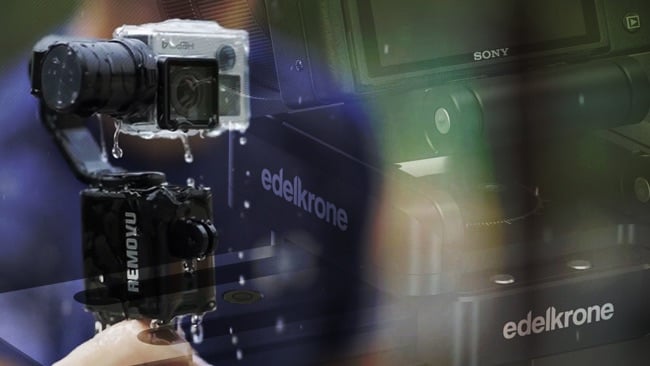 Want to travel light? Here's some of the stuff you'll need.

When you are travelling light you will always have to make some compromises. But, with the right gear, it is entirely possible to obtain shots with a cinematic sensibility without needing to hire Sherpas!

I love the idea of compact gear and I love the idea of simplicity. When you have a budget and a crew on hand and a load of time, then having a larger camera and a truckload of grip equipment is wonderful. However, as I have perhaps pointed out in my various tomes here, not everyone is working with such luxuries and to the consternation of some, the one-man band is a reality. Particularly when it might come to being out in the wilds doing a spot of adventure filming. Not everyone has the budget, gear, and logistical capabilities of Red Bull.

With that in mind, how can a person travel as light as possible, but still have some ability to get some slick shots? I’m going to give a rundown of some potential equipment here. I have not tested all of it in person, but I hope I can give you some ideas to investigate further. My thought process here is to have a camera that is capable of some real quality, as well as being able to move from mount to mount with minimal messing around. If there’s one thing that really makes me frustrated it is having to keep unscrewing mounting plates.

The business end, the camera

You might already have a lightweight camera you are happy with. Any of the peripheral gear I list here will work with most lightweight cameras. But for my purposes, I want a small camera that is capable of some good quality, with real grading potential.

There are two main contenders from my own perspective. The Blackmagic Micro Cinema Camera and/or the Panasonic GH5. The former can already record extremely high-quality 10-bit footage in log gamma up to 1080/60p, allowing for some slow motion, as well as DNG raw.

The GH5, of course, is larger but can record 10-bit 4K footage. A full log gamma ability is a paid for extra, but along with forthcoming firmware updates that allow very high bitrate intra-frame recording, this is a camera to be reckoned with. Both cameras have good battery life from their default battery systems, making power management easy. And both record to easily available SD cards.

The MFT lens mount on both means that glass can also be very lightweight if you do not wish to go down the adapter route for chunkier lenses. Other camera options do, of course, include the likes of the A7S series from Sony, although I have singled out the cameras above for their ability to record either 10-bit colour precision in-camera and/or raw capabilities. No doubt the forthcoming NAB show may give some additional options!

As I alluded to earlier, I really dislike tripod plate faff. To obtain different styles of shot we are going to need moving our camera from tripods to sliders and maybe even gimbals. A lightweight camera system gives us the option of using Edelkrone’s QuickRelease ONE system. Edelkrone will feature prominently in this article, simply because they have some pretty innovate solutions to problems that other companies have avoided tackling.

The QuickRelease ONE is a little device that attaches to the bottom of your camera. It contains a nifty little-geared mechanic that allows it to grip tightly onto the protruding 1/4” screw that sticks out of the top of the tripod mounting plate. In short, it allows you to move the camera from tripod plate to tripod plate without having to unscrew a single thing. The company claims that it can cope with rigs of up to 6.6 lb (3 kg) in weight.

The Micro Cinema Camera doesn’t have a built-in monitor. The GH5 is better, due to the built-in flip screen. But other camera options may not have a versatile display either.

First, the display itself. The Blackmagic Video Assist 5” is a good option for portability and the most up to date firmware gives it truly useful functionality. The SmallHD 502 is an alternative, but for viewing in bright outdoor environments and if your budget allows, the new SmallHD 503 UltraBright might be the better option. With a rather incredible capability of up to 2200 nits of brightness and a tough Gorilla Glass construction, this may be the better option for the outdoors. Although with a release RRP of $2499, it won’t be for everyone. Usefully, all these monitor options are powered by easily obtainable Canon E6 style batteries.

The monitor is one aspect, but you’ll need something to mount it on. Once again, Edelkrone has a solution that goes above and beyond the standard mounting arm. Edelkrone’s monitor arm solution allows the monitor angle to be adjusted smoothly and hold the position that you leave it in without needing to loosen any screws. This fits well with my minimal faff philosophy!

In addition, it also has a cold shoe mount on the opposite side for microphones and other accessories to be attached, as well as a mount underneath the monitor itself that could accommodate external recorders or other devices.

If you want to get some fully stabilised shots using a GoPro, then the Karma UAV system might be of use with it’s included body mountable gimbal. There is a drawback, though. It isn’t waterproof. This is where the Removu S1 comes in.

The Removu S1 is a handheld gimbal designed for use with GoPro cameras. It is also light enough to be helmet and body mountable. But the stand-out feature of this device is that it is rainproof. It won’t survive a full-on underwater dunking, but at least if it tips it down it will be perfectly usable. A first for gimbals of any type and one which is sure to please GoPro users looking for a truly useful gimbal solution to go with their all weather cameras.

Unfortunately, when it comes to three-axis stabilisers, compact options that will carry the weight of a GH5 are limited. And none of the ones available is rain or splash proof. But there are a couple of options to look at. The Ikan EC1 Beholder is one example that is relatively compact and can carry a weight of up to 2.04kg. An alternative is the Zheyun-Tech Crane gimbal weighing in at around 950g, which can cope with up to 1.8kg of camera weight. I tested the iPhone and GoPro versions of the Zhiyun gimbals last year and I found them to be very nicely built bits of kit.

I cannot conclude this section on gimbals without mentioning the DJI Osmo. With forthcoming versions that take the new X5S camera, it will be possible to carry a fully stabilised 4K camera that gives feature film quality results in a backpack. In fact, you may not need any of the other equipment listed here once it is released! In the meantime, you can purchase the current Osmo Raw system, which can carry the current X5R camera or the Osmo+, which incorporates an X3 camera with a 3.5x optical zoom capability.

But what about tripods? This is a more thorny issue that many feel passionate about because lightweight most usually means “flimsy”. If you want to travel really light, then you will have to accept compromise in this regard. However, there are companies such as Gitzo that make lightweight leg sets designed for travel and mountain use. The Mountaineer range, for example, varies in weight from just over 1kg for the Series 0 to around 2kg for the Series 3. Even the lightest weight version of the Mountaineer will cope with up to 8kg of load, while the Series 3 can cope with up to 21kg.

Of course, you will still need to consider the tripod head itself. Gitzo does make lightweight fluid heads, with the Series 2 weighing in at 1.4kg and a load capability of up to 5kg. For smaller cameras, it may be a solution. Unfortunately, when it comes to tripods we are at the whims of the laws of physics and if you want to be quickly mobile then your choice of sticks will be limited and performance somewhat restricted.

On a more positive note, Gitzo also makes its Ocean series, which have been made to withstand the rigours of wet ocean environments and other highly testing locations. These are slightly heavier than the Mountaineer series but are built to withstand mud, sand, and dust ingress into important parts.

A traditional slider can be a pain to carry around. What we need is something that will go in a backpack easily. Once again Edelkrone comes to the rescue with its Wing system. The Wing is literally a folding arm, that allows slider-style movement up to four times its folded length. In this case, all Wing models allow up to 40cm of horizontal camera movement. It is an incredibly simple idea, yet very clever in its execution.

Inside the Wing is a friction-controlled toothed belt system. So, movement friction can be adjusted to taste. The Wing is available in three models, each coping with different camera weights, with the top end Wing15, which can cope with up to 7kg of camera weight.

If you want to get airborne, then there are two capable tiny aircraft available. The GoPro Karma, which uses GoPro cameras, obviously, or the DJI Mavic. Both are very small, but the Mavic really is tiny and can be transported easily in its little case, taking up virtually no room at all in a rucksack.

Technology and cleverness have given us a number of options that were not available even a few years ago. It is now possible to obtain slider shots, Steadicam-style shots, and even aerial drone footage, all from equipment that can fit into a modestly sized backpack.

Shooting this way isn’t for everyone, but on a personal level, I am fascinated with some of the ever more compact and clever solutions that are out there to give creative freedom and mobility.