Capturing the ISS with an α7s 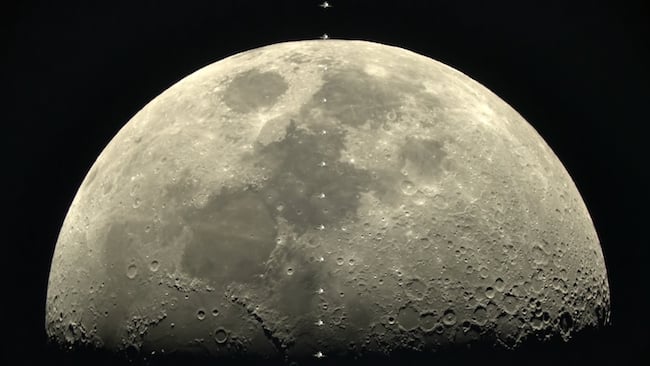 Frame by Frame: The ISS transits across the Moon at 17,000mph

On 4th February, amateur astronomer Thierry Legault filmed the ISS as it passed across the middle of the first-quarter moon with his Sony α7s camera.

In a nice bit of synchronicity, Legault shot the event in the South of France, near Rouen, the home city of French astronaut and current ISS resident, Thomas Pesquet. What’s genuinely rather breathtaking about the video that he’s posted of the event (and that you can watch below) though is that it perfectly captures the speed of the ISS as it streaks across the face of the moon. It really is one of those blink and you’ll miss it moments; transit takes 0.4 seconds at a velocity of approx 17,000mph.

Slowed down you can make out the shape of the station and even pick out some detail of the solar panels.

And if you’re wondering what lens he used with the camera to capture that, the answer is $5500 worth of Celestron C14 telescope.

Insta360 ONE R 1-inch Edition review: 'Action cameras don't get much better than this'

The new 85mm lens is compatible with both Sony E-mount and L-Mount variants.

It’s been in public beta, but now, finally, Atomos has released the final release firmware to enable 5.9K ProRes RAW recording from the Panasonic...

Atomos S1H Ninja V firmware released along with a...

You really, really can't believe your eyes. Here's the...