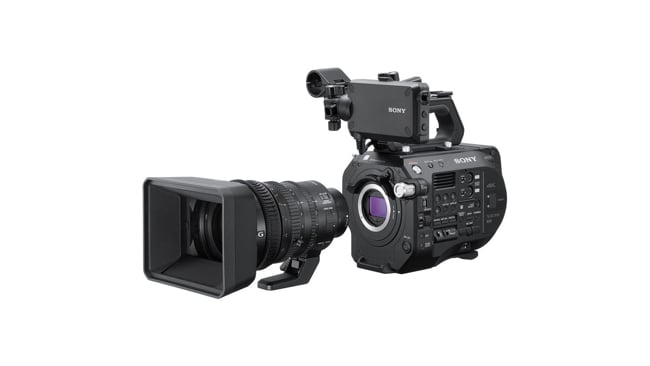 Ned Soltz liked the look of the Sony FS7 II so much he bought one. Happily, in unboxing it and pairing it with the new Sony 18-110 f/4 lens and a loaned Zacuto VCT Pro Baseplate, he reckons he has a reliable workhorse that is very much worth the money.

I’ve been writing about the Sony FS7 II since its announcement and in fact had been briefed under NDA by Sony several weeks before it came out. At first, I did admit to a bit of disappointment that basic camera imaging and processing remained the same. But I came to understand that Sony’s objective was to enhance the model at a $1500 premium over the existing FS7 (it costs $10,000), keeping the FS7 in the product line. My personal FS7 produces terrific images both internally to the XQD cards as well as to my Odyssey 7Q+ external recorder. And it has more than paid for itself. So having direct press access to the camera even before release convinced me that I should add an FS7 II to the camera stable.

I purchased the FS7 II with the new 18-110 f/4 lens as well as another XDCA-FS7 back. For evaluation purposes, I borrowed a VCT Pro Baseplate from Zacuto below, to whom I express appreciation for the loaner.

They say that first impressions set the tone for everything to follow. And in less than 24 hours since receiving both the camera kit and baseplate, the impression is very favorable.

The most significant enhancements found on the FS7 II are the lever lock lens mount, variable ND and vastly improved viewfinder mounting and loupe.

The very first impression came when mounting the lens. The lever lock system is very PL-like and I am accustomed to shooting PL mount cameras. Slide the release button upwards and rotate the ring clockwise to unlock. Insert an E mount lens or E mount adapter just as you would insert a PL lens—straight on lining up with the dots. It did take me several attempts to get the feel of the mount, particularly with the somewhat heavy 18-110. So I practiced with the lens cap until I got the feel of it. Once the lens is mounted, turn the ring counter clockwise. The release button will latch and the lens is securely attached.

Sony has maintained that this mount will support the identical weight as the F55 mount. While I cannot necessarily verify that contention, I can compare to my FS7 with the Sony 28-135 lens. I have honestly had some issues with the FS7 and the 28-135. It is a heavy piece of glass and there was definitely an amount of play present at the mount. Sony techs advised me to tighten the flange on both lens and camera but “don’t over torque because you could permanently damage something.” Even after tightening the screws, there was still some play. With the FS7 II, there is absolutely no play with the heavy lens. I would, however, support heavy lenses whenever possible.

I had already shot pre-release versions of the camera with the variable ND feature as well as the FS5, from which the FS7 II inherited variable ND.

From the point of view of actual cinematography, this is the most advanced feature of the camera and alone is worth the premium over the FS7. Essentially, camera aperture can remain the same across shots while exposure is adjusted via ND. This allows for consistent DOF or even to shoot at your lens’ “sweet spot”.

I had replaced the original FS7 grip with a Shape’s excellent replacement component. Sony comes close to the Shape product with a knob extension arm adjustment rather than actually requiring a tool like the original FS7. Shape still wins this competition, though, with its push button vertical adjustment capability rather than having to loosen the entire assembly with the rosette attachment knob. I wish Sony had gone the extra mile and replicated the Shape assembly.

The Viewfinder adjustment system, though, is just what this camera needed. I found myself frustrated by the difficulty of adjusting the VF axes. Sony provides a square rod to keep the VF level along with a small bag full of other accessories to reconfigure the mount. Adjusting for handheld shooting was one handed and simply. Likewise the microphone mount feels both more secure and more adjustable.

Another constant source of frustration was the VF loupe attachments. It was hard to attach and never felt secure. That’s all fixed with the FS7 II.

It’s the small things in life… The XQD cards really do protrude a bit more making card swaps faster. The green LED power light over the power switch just makes sense and always should have been there. Three extra user definable buttons speeds up shooting.

I personally like to shoot on the shoulder so with the FS7 series that means a baseplate. Since Zacuto has recently started shipping their VCT Pro plate, I decided this would be worth testing.

The assembly itself is a bit bulky and heavier than other baseplates I’ve owned or tried. But it does have holes for both front and rear rods. Like all Zacuto products, engineering is solid. As a universal plate, it can work with a variety of cameras. But unlike plates designed specifically for the FS7 series, it does not conform to the camera’s mini shoulder mount dimensions. So there is no removal of the FS7 II’s pad but there are no issues attaching it to the camera bottom via the two screw mounts in the bottom front of the camera.

Where the VCT Pro baseplate differs from the pack is its sliding ability. This allows for perfect camera placement to one’s preferences. Furthermore, the sliding plate actually can be removed from the assembly to access the screws to attach to camera body. And, if this wasn’t enough, Zacuto offers a $100 or so accessory to act as a plate receiver mounted to the tripod via its head’s mount. This gives all the advantages of a camera easily switched from tripod to handheld while eliminating the extra bulk of a VCT receiver plate. The shoulder pad is very comfortable and between the comfy pad, the sliding plate and the camera’s VF adjustments, it is very easy to obtain shoulder balance and comfortable shooting position.

Zacuto really nailed it with this product.

I’ll have more to say about the 18-110 f/4 lens after I’ve shot with it for a bit. This is the only piece of the kit that I couldn’t evaluate pre-release owing to the few units in the US. But I can say that the zoom is truly mechanical when servo zoom is switched off. And the focus ring can accommodate a follow-focus without an add-on gear.

I was impressed enough with this camera from pre-release testing to convince me to purchase it as an additional body. The wider lens also was a major attraction. I still wish Sony could have released a model with additional features such as clear zoom, IBIS (in body image stabilization) and useable autofocus for run and gun shoots. I would have paid more than the $1500 difference between the FS7 and FS7 II. We’ll probably have to wait another year or more for that.

The FS7 is a workhorse in a wide range of shooting situations. The FS7 II builds upon the FS7 with improved user experience, far more secure lens attachment, variable ND and a host of other smaller points.

I’m pleased with the purchase and feel secure in my investment. In other words it’s made a great first impression.