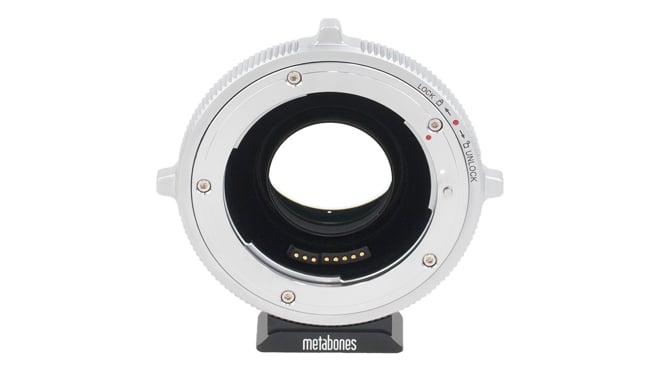 It’s been five years since Metabones announced the first electronic EF to E mount adapters and the company has marked that anniversary with four new releases.

Starting with only aperture control and auto magnify, the company has continued to update both hardware and firmware while also expanding product offerings to include adapters for X-Mount, Micro 43, Blackmagic and Leica cameras adding as well the SpeedBooster lines to adapt full frame lenses to smaller sensor cameras. Lens support includes PL mount, Nikon G and F, Leica, Contax—virtually any lens can be adapted to major camera mounts.

Sony E mount cameras have become increasingly popular in both video/digital cinema and mirrorless products and Sony has offered on several occasions free Metabones adapters with the purchase of specific cameras.

All of the new products have a new rubber gasket to protect the E-mount connection from moisture and contamination, an LED light to notify user of Green or Advance adapter modes, and a dedicated switch for those mirrorless cameras with IBIS (in-body image stabilization).

The new products claim to add full compatibility with the Sony FS7 II video camera. That will indeed be of some interest inasmuch as I do know that the current Metabones IV and Speed Booster will mount on the FS7 II’s locking mount. But I have not yet been able to test electronic compatibility.

The two CINE models differ from the Smart Adapter V and Speed Booster ULTRA II by adding a positive-lock EF mount similar both to PL cinema mounts as well as to Sony’s FS7 II locking mount.

All other features remain the same as the most current firmware release. And speaking of firmware releases, Metabones has also quietly updated the firmware for current Mark IV and Speed Booster ULTRA models to v0.54, fixing certain autofocus accuracy problems. The EF to Sony FZ CINE adapter also saw an update enabling lens hot swapping (while at the same time advising that the best practice is still to power off the camera before changing lenses).

The two CINE models are slated to ship in February at prices of $449 for the EF to E Cine and $699 for the CINE Speed Booster ULTRA II. Pricing and availability for the Smart Adapter Mark V and Speed Booster ULTA II are to be determined.

The full press release with product specs over the page.

Since the advent of the original EF to E Smart Adapter 5 years ago, Metabones has assumed a pivotal role in the mirrorless revolution. Cinematographers and photographers all over the world are armed with unprecedented flexibility of lens and camera choice.