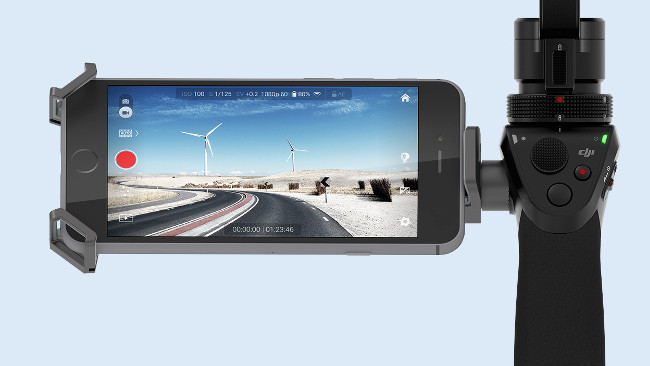 Replay Opinion: When coming up with the next great camera, perhaps manufacturers should give more thought as to how actual humans physically hold cameras.

I am sure we have all seen a humorous cartoon poking fun at the size of our current smartphones. The joke is that we went through a phase of making phones smaller and smaller, but now, it is silly that we are currently carrying around devices that, while not quite a brick, are hardly compact any more.

But the joke forgets that, when phones became increasingly smaller, they were used for limited functions, phone calls and texting. As soon as they gained more functionality, in some cases replacing our main computers, handling everything from video conferencing through to advanced gaming, the form had to follow function.

Cameras have gone through a similar cycle. At one time, ENG rigs were very heavy indeed. When  solid state media arrived, they became much lighter. But this threw up more challenges. Because such cameras were designed for use on the shoulder, a light camera body meant that the weight of the glass up front could throw things off balance. So it does throw up an interesting question of what the right size and weight for a camera is.

Size is a compromise based upon the required use, how much processing power and cooling you need, the size of the light gathering chip or chips, the lens type and power requirements. GoPro shows that it is perfectly possible to make a 4K video camera that fits into a pocket. But there are compromises based upon the laws of physics.

The Blackmagic Pocket Cinema Camera is also very small. But it has a few limitations requiring additional accessories, negating its initial compact size. Firstly, it only achieves 1080p resolutions. Cooling and power supply for much higher resolution and higher framerates is an issue. Further, the swappable internal batteries barely give 30 minutes of life each.

For practicality, it must be powered by external batteries. The LCD screen is not something you can use for primary monitoring, thus an external monitor must be added. This all requires a cage system, adding other functionality, such as carrying handles. The final setup is still small in comparison to, say, a Sony FS7. But it is a far cry from the compact body we started out with.

Add in lenses, such as the Canon 70-200 f/2.8 EF, and the bulk of the rig skyrockets. And while the rig still may be small in comparison to other alternatives, it shows that aiming for compactness can be subject to the law of diminishing returns.

Fundamentally we are all human size, within degrees of variation. For practicality, a camera will always require an ergonomic way of being carried or hand operated by a human hand. Buttons, whether they are on a touchscreen or mounted physically onto the camera, will always need to be pressed by human fingers (quite often with thick gloves on!). Human eyesight will always require that the screen we monitor our footage with is either large enough to be viewed at casual operating distances or as an eyepiece viewfinder.

The glass we mount on the front of the camera also dictates size. A mount has to be strong to hold larger telephoto lenses. Optics is an area where we are very much restricted by the laws of physics. Much as it would be lovely to produce a lightweight lens that can go from 15mm to 300mm at a constant f/1.7 with no distortion or focus breathing, that can focus light onto a full frame chip, I am afraid that it won't happen. Lens design is a constant battle of compromise between performance, size and cost. The lens manufacturers could make the perfect lens if they so wanted. But we probably wouldn't be able to physically lift it for long or afford it!

This means that cameras will always need to remain at a certain size. In some ways, cameras have become too small, with fiddly little buttons. But while we cannot really help it when it comes to the size and weight of good quality lenses, it isn't really the physical size of a camera that is often the problem. It is usually more the overall weight and the ergonomics.

A larger camera isn't usually an issue, if it is generally easy to lift (glass aside) and move around. Heavy rigs, though, can sap creative energy. But even heavy cameras can be made much more bearable by their ergonomics and balance of weight. It seems that camera bodies are being designed around the chipset and cooling mechanisms, rather than practical thought about operating and thoughtful ergonomics.

I have written before about how left of field thinking could get us a camera for most occasions that uses a similar way of operating as DJI's Osmo system. DJI is, after all, going to be bringing out a new Osmo that can take the new X5S – an interchangeable lens M43 camera that has been compared favourably to the Alexa, in terms of look and overall picture quality. I still very much feel this way, that much more creative thought needs to be given to the shape and ergonomics to produce camera systems that more naturally suit the way that humans prefer to hold things. At present, the focus of most camera manufacturers seems very much on what needs to be attached to the camera, while the basic ergonomic design stays as it is because that's how it has always been.

But even if the focus changes, there will be limits and compromise will never be far from the mind.