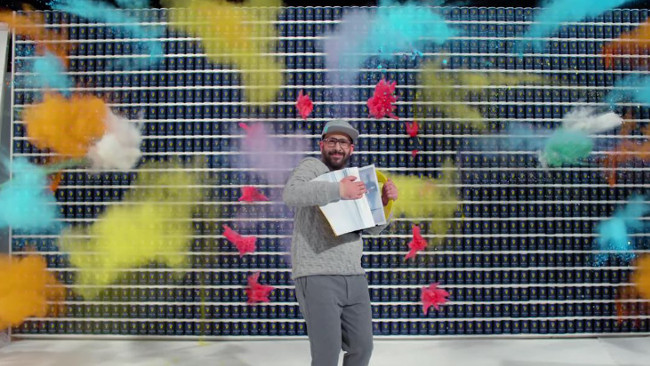 A still from The One Moment by OK Go

The band OK Go is known for pushing the creative envelope in its music videos, yet its most recent may be the most inspired to date.

One take videos are always pretty cool to watch. Some of the one shot Steadicam sequences in films such as Atonement are incredible achievements. Another milestone was the Russian Ark – a feature film that was filmed entirely in one shot, again, on a Steadicam. The result, which encompassed over 1000 actors and extras, was incredible to see.

While these were undoubtedly technical achievements, they were also highly creative in their scope, too. But when it comes to creativity whilst pushing technical boundaries, you would be hard pressed to find a genre that pushed as far as music videos.

OK Go is a band that has become renowned for trying some wacky things, including a video shot in zero-G onboard a 'vomit comet'.

The band has now taken things a step further by filming a video with high speed cameras. The results speak for themselves.

The video, entitled The One Moment, has the appearance of having been shot in one go, although the reality is that it was recorded in seven different chunks at differing frame rates depending on what was being filmed. This varied from 6000fps at its fastest, to much lower frame rates for sections that involved lip sync.

It isn't entirely clear whether these chunks were filmed concurrently, as a seamless choreographed sequence, or whether they were broken down and shot individually, although, the suggestion is that it was the former.

As a technical achievement, it is certainly impressive, with the Bolt motion control arm being pushed to its limits to move to the precisely choreographed action. As a method for such videos, it is also interesting. As with the band's previous videos, OK Go makes no bones about how they were made, with very bare bones sets and with much of the creation methods being perfectly visible within the videos themselves.

Watch the video below and let us know what you think.