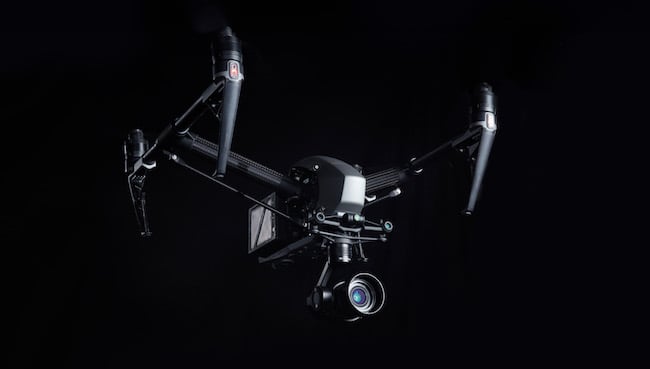 The Inspire 2 kitted out with the Zenmuse X5S

DJI’s announcement of not one but two new drones and cameras, the very impressively specced Inspire 2 and the prosumer Phantom 4 Pro, shows that it is still driving drone R&D as hard as ever.

The 15th of November brought about one of the most major announcements from DJI in a long time. There’s a lot to get through and digest here with the two new drones , but in short, DJI has just moved the goalposts and moved them significantly.

This is the most eagerly anticipated announcement from DJI. Rumours have been flying around for a long time as to what this system might offer. It is fair to say that DJI has not only answered all of the criticisms of the original Inspire system, but it has gone a couple of steps further in a few areas.

I’ll start with some of the less known aspects. Redundancy has been included for many systems, including dual IMU, dual barometers, although notably a dual compass is missing. Regardless, these are very welcome safety features. The ESCs have also been given signal redundancy, with signals generally been sent via PWM, but with a fallback to send signals through the serial port if this fails. ESC failure is a major cause of crashes in drones, and while there is no physical ESC redundancy, the fact that a dual signal pipe is included should go some way to giving reassurance.

Collision avoidance has also been added to the system. The Inspire 2 creates a 3D map of its environment, as well as being able to actively detect obstacles 30 metres in front of it. In addition to having sensors on the bottom of the aircraft, the Inspire 2 also features infrared sensors on top of it too. In short, this means that the Inspire 2 will be safer than ever for obtaining shots inside buildings.

The biggest addition to the Inspire 2’s flight capability is the dual battery design. Flying with two batteries not only gives safety redundancy, but the flight time has now doubled to 30 minutes from the Inspire 1, which could only realistically get 15 minutes or so of endurance. The batteries now include built in heating systems as well, so cold weather flight is now made much more convenient.

Okay, so the safety systems are all very nice, but the question on everybody’s lips is, what is the camera like? In the case of the Inspire 2 there are two cameras available at the time of its release. The X4S and the X5S. Something to be aware of is that when you purchase the Inspire 2, you will need to factor in the price of the camera on top, as well as certain licensing costs, which we will cover into in a moment.

These units are not compatible in any way with the previous Inspire models. However they do offer a seismic shift in picture quality over the previous cameras. DJI has moved the image processing and recording systems, which DJI call CineCore 2.0, over to the aircraft fuselage. The Inspire 2 uses a proprietary DJI SSD, which plugs into the rear of the aircraft, for recording DNG RAW and ProRes, while a Micro SD is used for H.264 and H.265.

The X4S is the base camera. This features a 1” sensor, and, interestingly, a mechanical shutter which DJI claims reduces any potential CMOS skew and jello. The X4S is capable of recording both H.264 and H.265 @ 100Mb/s in 4K resolutions: a significant and much requested boost from the previous Inspire. Using H.264 allows you to record up to 60fps, while H.265 is restricted to 30fps. In addition, the camera features a physical aperture. Even as the base camera, it is certainly no slouch as you can see.

However it is the X5S which is the most interesting. Featuring an M43 sensor, much like the existing X5, it allows the interchanging of lenses. The much-improved gimbal design is said to reduce the chance of tilted horizons, an issue that plagued the original Inspire. Further more the improvements in stability now allow lenses with up to a 90mm focal length to be used.

Interestingly the X5S, at around £1500 is not as pricey as the X5R from the previous aircraft. No doubt this is because the recording systems have now been shifted over to the aircraft itself. However, in addition to the price of the X5S itself, you now have to pay a license cost depending on the codec you wish to use. £1000 buys you a license to use DNG RAW, while £500 gets you ProRes of all flavours. The camera will record H264 and H265 at the same frame rates and resolution as the X4S if a license is not purchased.

This is actually fairly reasonable, since the cost of the camera with a ProRes license will no doubt be more than sufficient for most people. Even with a DNG license, you still have a camera system that is less expensive, and more capable, than, say, a larger drone with a Blackmagic or Sony A7S plus Ronin or Movi gimbal.

Once you have bought your license, you get some rather mouth-watering recording abilities. For DNG RAW you get 5.2K resolution at 12-bit depth at up to 30fps, and 4K at up to 60fps with 10-bit colour depth. ProRes goes to a maximum of 5.2K resolution at 30fps 422HQ, while in 4K modes you can record up to 30fps in the 4444XQ format.

The cameras are fairly impressive, then. But DJI has not forgotten that we need the ability to get the shots more easily. The amount of computational power that is on board the Inspire 2 beggars belief. The aircraft will recognise certain objects such as people, bikes, cars, boats etc, and can automatically track them.

Something that can be a pain is that when the gimbal reaches its maximum rotation, you are pretty stuffed, and can miss shots as a result. The Inspire 2 corrects this problem, and automatically rotates itself to ‘unwind’ the gimbal while still allowing the directional control to carry on as normal.

There is also now a separate FPV camera, so that the pilot does not have to rely on the main camera view, which is quite often not pointing forward. This has been one feature that has been requested a lot, and it is fantastic to see DJI taking note. 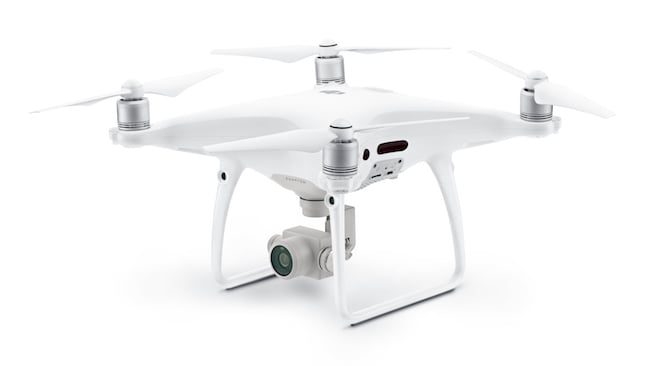 While the Inspire 2 announcement took the limelight, the Phantom 4 Pro is also a huge step up from previous models. If any aircraft should make existing Inspire 1 owners think about moving on, it is this one.

The Phantom 4 Pro also has a 30 minute flight time, and adds in multiple directional obstacle sensing in all four directions, which is a good improvement over the standard Phantom 4. The transmitter now also includes a built-in screen with 1000nit capability, so a smart phone is now no longer required.

Active Draw allows a flight route to be drawn on the screen, which the aircraft can then follow, while Active Track inherits the object recognition and tracking abilities of the Inspire 2. Among other flight modes, these make flying as a single operator easier than ever.

But the highlight of the Phantom 4 Pro is that it too, has a camera with a 1” sensor, and 100Mb/s H264 and H265 4K recording capabilities. This firmly places the picture quality of the P4 Pro well above that of the original Inspire 1, and should give owners of that aircraft pause for thought.

To be honest, I have only touched the surface of the new capabilities of the new aircraft. Suffice to say that DJI just seem to go from strength to strength.