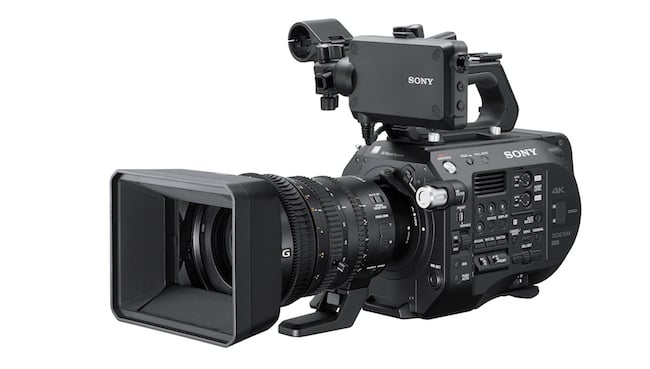 The new FS7 II: an addition rather than a replacement in the Sony catalogue

It seems that New York is having a bit of a day of unveiling surprises, with a new, advanced model of Sony’s popular FS7 camcorder, the FS7 II, breaking cover at NAB New York this morning.

The $10,000 FS7 II is positioned as an advanced model with the original FS7 remaining in Sony’s product line and still slated for ongoing firmware updates.

The FS7 II adds several key features to the FS7.

The FS7 II takes this feature directly from the FS5 introduced earlier this year. Variable ND offers attenuation of 2 to 7 stops of ND adjustable in several ways:

Preset ND
The FS7 II has a 4 position ND wheel like the original FS7 with one position clear but the other three positions may be set in the camera’s menu system.

Variable ND
By switching a control level on operator’s side of camera from Iris to ND, ND settings can be dialed either via the dial on the side of the camera or via the dial on the control grip. While ND changes in ¼ stop gradations, the steps appear seemless. I have had the opportunity to shoot a pre-release version of the camera and have tested and verified this feature.

Auto ND
Think of it almost as aperture priority in a still camera. Set a given aperture and then invoke Auto ND. The camera will set an ND amount. Then return to Variable ND to fine tune the exposure. Auto ND has no fixed button on the camera; you will need to set one of the 10 custom buttons to Auto ND.

This is impressive. It is effectively a PL-type mount strong enough to secure a heavy lens without support. It rotates to open position to insert the lens directly like a PL lens. You don’t have to twist the lens. Then rotate to lock. To release the lens, push up on release lever to unlock the mount and then rotate it. This operation can be done single-handed.

As a current FS7 owner, I can attest to frustration with both the LCD and microphone mounts. The FS7 II has an entirely new mounting system for the LCD screen based upon two 15mm rods, one round and one square. Twisting locks allow adjustment of the assembly along two axes. Again, this operation can be done with one hand even while the camera is on your shoulder. The microphone mount has a similar arrangement. Mic mount and LCD can even be swapped. Finally, the LCD screen has a new pop up shade for situations when not shooting with the eyepiece. And, speaking of the eyepiece, it now attaches to the LCD screen with a single latch.

Sony plans to offer the LCD and Microphone mounting systems as well as the new control arm as a paid option for existing FS7 owners.

Yet another user concern with the FS7 was the difficulty of removing XQD cards from the camera. The XQD cards now protrude twice as far from the slot for ease of insertion/removal, even when wearing gloves. And the position of the audio control door has been moved.

The FS7 II sees the introduction of BT.2020 gamut to the camera’s Custom Mode. This broadcast standard for wider color gamut positions the camera for acquisition in HDR productions.

We will have more to say about BT.2020 and color gamuts in a future more extensive review of the camera.

Sony has not yet commented whether BT.2020 will be made available to current FS7 users via a future firmware update.

We’ve already covered the 18-110 f/4 Cine Zoom lens introduced at this year’s IBC show. The 18-110mm zoom will be offered as an optional kit lens.

All Sony and third party peripherals for the FS7 will work on the FS7 II since body and electronics remain the same. All specs are the same for the FS7 II with of course the exception of ND and BT.2020 gamut in custom mode.

It would seem that Sony is positioning the FS7 II primarily to attract new users to the camera while also tempting existing users who might want to upgrade for the major features of Electronic Variable ND and the Locking E Mount.

In my early assessment of the camera, I find the Variable ND to be the most welcome change. By choosing an aperture and then exposing using ND, consistent DOF across a shot or even a scene is assured. Then again, the heavy-duty locking mount gave much more feeling of lens stability with a heavy lens.