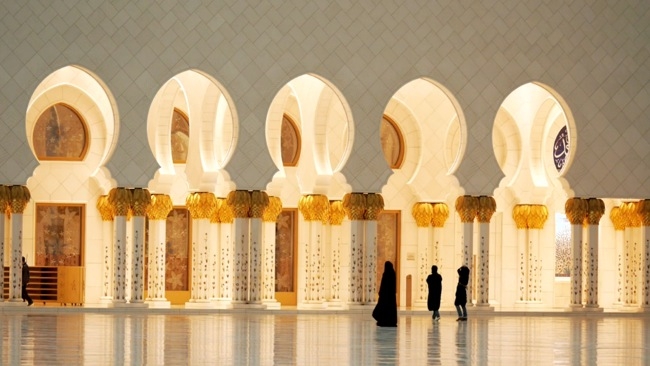 The Panasonic Lumix GH3 keeps amazing us with the quality of the video it can create in capable hands. Regular RedShark contributor Mark McCarthy of Sparky Media Productions takes us to Abu Dhabi, capital of the United Arab Emirates, where the clear skies, geometric patterns and striking buildings are the perfect way to test a camera

Sparky Media Productions were recently working on a shoot in and around Abu Dhabi, the capital city of the UAE. One evening I packed up my GH3 with three lenses (Lumix 12-35mm, Lumix 35-100mm, and the Voigtlander 25mm), popped them all into a backpack with a small tripod, jumped into a taxi and headed out to the Sheikh Zayed Grand Mosque.

This stunning mosque was initiated by the late President of the United Arab Emirates, HH Sheikh Zayed bin Sultan Al Nahyan. I had passed by it in previous years but hadn't yet had the chance to visit inside, until now. Once through the impressive gates, you really are hit by the sheer scale and size of it, something which was terribly hard to convey even within this short film , but with the GH3 in hand I did my best in my few short hours there, to do my best to achieve this.

I was absolutely delighted by the results. I didn't have much time to set up each shot as I didn't want to draw unwanted attention to myself, but the outcome was really impressive. Again you have to keep reminding yourself, this is a sub £1,000 camera producing these images! The low light capabilities are just fantastic and the GH3 never went over 800 ISO throughout the evening, and it did become very dark.  After a quick grade in Sony Vegas, tweaking a few color curves and balance (there really is plenty of room for grading and managing the highlights from the GH3's codec - it offers plenty of flexibility), I finished up with the look I was hoping to achieve. Having the potential just by having this small and discreet camera in your bag to produce images this good looking, is something any serious cameraman shouldn't really be without.

Here's our original hands-on report on the GH3