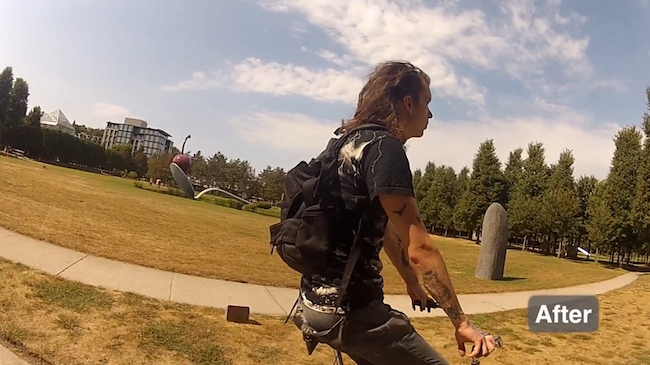 We check out FxFactory's CrumplePop BetterStabilizer plug-in, an improvement over FCP X's native options, but how does it compare to Adobe's Warp Stabilizer?

Fx Factory is a container that hosts not only its own native effects, but also dozens of third party effects for Final Cut Pro X, Apple Motion, Adobe Premiere Pro and Adobe After Effects. Developer Noise Industries offers both a free version that contains basic native effects and can host all third party plug-ins, as well as a $399 Pro version that includes a variety of additional effects. If you are not already using FxFactory, definitely check out all of the particulars here.

BetterStabilizer, the most recent FxFactory plug-in, comes from CrumplePop, a Mac-only developer of both standalone plug-ins for FCP 7, FCP X and Premiere Pro, as well as plug-ins which install in the FxFactory environment.

The plug-in can be downloaded and purchased either through CrumplePop's site or through the FxFactory master application. Either way, it runs transparently through FxFactory and appears on the Effects browser of your respective application as 'CrumplePop BetterStabilizer'. 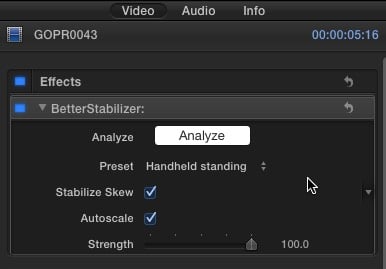 Using the plug-in is really quite simple. Drop the effect on the desired clip. Click the analyze button. Select a preset from the drop down. Presets have been developed for most shaky-cam scenarios from bicycle mount to drone to handheld walking. That's all there is to it.

But does it work?

I presented the effect with impossible footage, 4K GoPro files mounted on an ATV handlebar along dirt trails in an Alaskan forest. I selected clips with ruts and puddles, clips with smooth dirt roads, and clips on bumpy roads operating the ATV as fast as possible for conditions (or perhaps a bit too fast).

In each case, I first analyzed the clips and then applied the Handlebar preset. All showed notable improvement. While I did not time the analyze phase, I did run a test on the same footage using Adobe's Warp Stabilizer. Analysis was definitely peppier with BetterStabilizer.

The results of clips with only moderate amounts of shake were about equal with BetterStabilizer and definitely easier to use, owing to lack of many manual options available to Adobe Warp Stabilizer. And BetterStabilizer certainly is a significant improvement over any stabilization plug-in within FCP X that I've tested.

Now the worst of the footage did not benefit from the preset. The only options available to the plug-in are a percentage of effect slider and a 'fix skew' check box. The skew check box was unavailable in the handlebar preset, but was available in other presets. 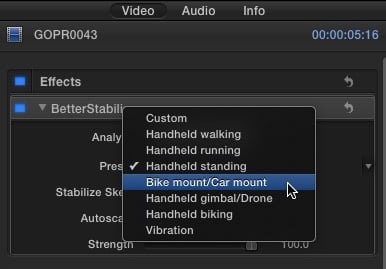 For the difficult clips, I selected Custom mode, cranked up the effect percentage to 100% and checked the skew box. Then I analyzed the clip. Results were much more stable with this bit of manual intervention – still not wonderful, but starting with unusable footage nonetheless created some video that a viewer could tolerate for a few seconds. Adobe Warp Stabilizer produced similar results, but with much more work, owing to more parameters. In this case, the extra effort for the Adobe native plug-in wasn't worth it.

I would highly recommend BetterStabilizer for FCP X users particularly. While for Adobe users, it provides a much more streamlined and, in many cases, at least as an effective a stabilizer as Warp Stabilizer, FCP X has a decided lack of stabilization options. It's introductory price of $49 (regular selling price will be $99) makes it a very inexpensive and useful tool. It can definitely pay itself back just by rescuing a clip you need, but which has too much shake and skew.

I guess we could say that BetterStabilizer does live up to its name. It's definitely better than FCP X's native plug-in and at least as good as, and sometimes better, than the Adobe Warp Stabilizer. Well worth $49.