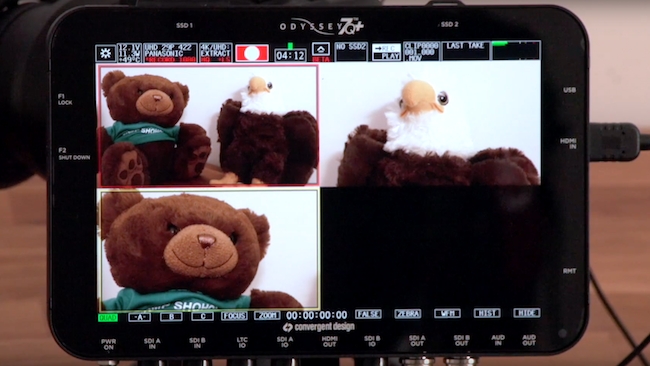 Titan: three into one does go

Convergent Design has just announced Titan, a paid upgrade to its Odyssey 7Q, 7Q+ and Apollo line of external recorders that enables 4K output to be split into multiple windows.

Essentially Titan enables 4K output from any SDI or HDMI camera source to be split into multiple windows through a super-sampling to HD and selecting windowed areas of that image for recording.

This will enable one camera to capture effectively three shots, the original full frame shot and two windowed shots. This will be particularly helpful in interviews. As an example, in the typical two-shot interview, the image can be split into the master shot and then a window for each of the subjects. The operator can switch between shots by simply tapping the screen within the appropriate window. The Odyssey or Apollo will record the switched content as well as ISOs of each window. It will then write a standard EDL to the device’s SSD which can then be used in any NLE.

Another application where you can see Titan doing well is in sports coverage.

Switching between windows can be straight cuts or dissolves, utilizing the same technology as in the Apollo. Additionally, output from a Convergent Design Apollo can also be used as a source for a live switch in a Titan-enabled device.

Titan does not require the Convergent Design RAW option but works with RAW files as noted above.

Titan will debut at IBC2016 and is expected to be available at the end of September. As is the case with the RAW package or with upgrading an Odyssey to Apollo features, the upgrade is via a purchased unlock code. Titan will require a firmware upgrade for Odyssey or Apollo which will be a free download for existing users. That firmware upgrade will likely contain other enhancements and fixes, as yet unspecified.

We will be reviewing this upgrade in greater depth when it becomes available.