Canon gets it right with the EOS C700 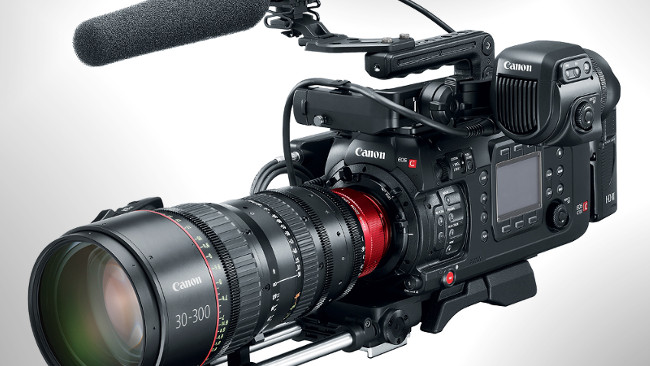 Opinion: If initial reports can be trusted, Ned Soltz reckons that the Canon EOS C700 has all the features and looks of a "real camera."

It may be presumptuous to evaluate a new camera only on a photo and a press release, but Canon is doing a lot of things right with its surprise announcement of the C700.

The first thing that strikes me is form factor. While the existing Cinema EOS form factor was attractive to many, I was never comfortable with it. It just didn't feel like a video camera with its oversized DSLR form factor. And the buttons weren't in any standard video camera configuration. It required a kludge of third party mounts, viewfinders, power solutions and just generally ended up with a franken-rig and mess of cables.

Yet reality TV, doc shooters and other run and gun folks adore their C300's. I attribute this in great measure to three factors: glass, ease of operation and look.

The wide availability of Canon EF glass from the still world eases lens choices in every range from consumer still lenses to Canon's ever-expanding line of Cine lenses. Canon camera menus are straightforward and efficient. I include under 'ease of operation' the dual pixel autofocus system, which actually is usable in run and gun scenarios. And finally, the 'Canon look'. The combination of 'look' with the fact that the original LogC is not a very extreme log curve means that it is much easier to coax a great image in post than other cameras. And in shooting straight Rec709 for broadcast, the image still looks good and the workflow is proven.

But despite these strong points, the C100/C300/C500 were never my cameras of choice.

The C700 changes the Canon game. First of all, the form factor is that of a "real camera." Of course, look and feel are subjective. But you don't need the rig from a horror movie to put the camera on your shoulder. A simple $1500 (street price) shoulder mount and then, if desired, another optional ($2000) handgrip and lens control are all you need. The optional CODEX 4K recorder just snaps onto the back. Canon got the design right.

The availability of both rolling shutter and global shutter models for the first time adds choice. Global shutter comes at the expense 1 stop of dynamic range and no doubt a lower native ISO, but the choice is there. These mounts are also all factory interchangeable. Canon got the mount and shutter options right as well.

AVC-variant codecs are great and they are efficient. But for workflow purposes, at the very least, many would trade larger file sizes for the universality of ProRes. Canon is right to give users the option of codecs.

The optional OLED viewfinder mates perfectly with the camera and avoids the need for jury-rigging a third party VF endemic to current Cinema EOS cameras.

The C700 EF version incorporates Canon dual-pixel AF, also seen in current iterations of the C100/C300. It's smething else to position the camera as a high-end field acquisition device.

There are still unknowns. We do not know the native ISO and, therefore, its low light performance. We then cannot extrapolate the speed of the global shutter model.

With the option for the Codex RAW recorder (price and availability not announced as of this writing), we do not know whether there is RAW output for third party devices.

I only have two over-arching questions. The first of these is market position. Is Canon even needed in a market segment already dominated by ARRI, Red, Panasonic and Sony? That is a question that only testing the marketplace can answer.

The second, though, is more of technology. In an environment where Red leads the 8K charge and no doubt Sony and Panasonic will have to follow, is the introduction of yet another 4K camera (OK, 4.6K with the upgrade due in March) a wise move on Canon's part? And is that level of financial investment worth it for content creators who already are beginning to cast an eye on 8K? Well, here you might argue that, despite the world having arrived at 4K, less-than-4K cameras from ARRI occupy major market space.

Still, this is the first Canon Cinema EOS camera about which I have been truly excited. We will no doubt see much more at IBC, including first examples. Canon now enters the rarefied $25000+ market with a product worthy of more than a second look.