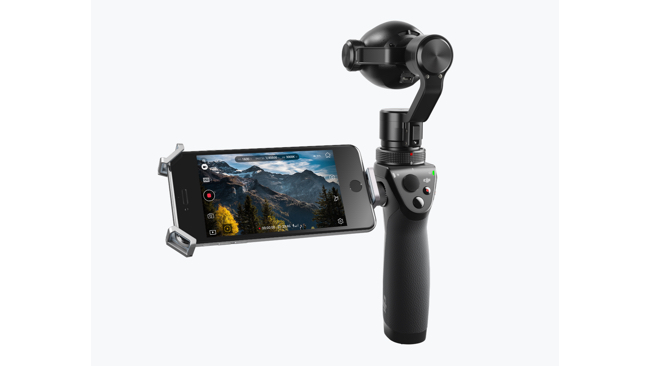 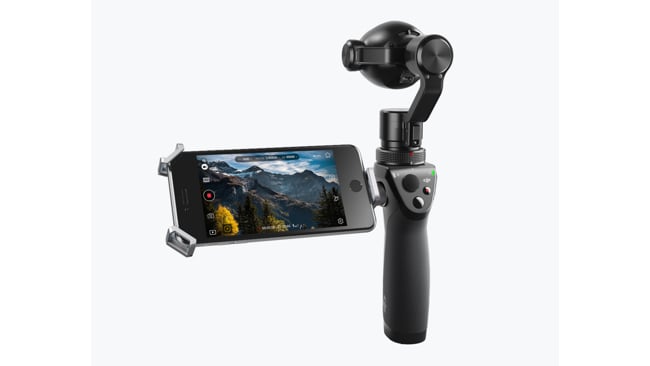 The Osmo handheld camera gimbal has been a successful product for DJI. It is both affordable and compatible with the Inspire 1 range of cameras, all the way up to the DNG raw capable X5R. This gives it an advantage over rival systems that rely on larger cameras for a quality video image. With the optional damping arm to reduce vertical shift from walking (an advantage that a dedicated Steadicam normally holds over gimbals), even higher quality footage can be obtained.

The Osmo+ is a new addition to the range. Using a similar camera to the recent Z3, the Osmo+ allows more control over composition with the additional of zoom abilities. Optically it is capable of 3.5 times zoom. After that DJI have implemented what they are called a digital lossless zoom. In other words, a sensor crop. This is only allowed in 1080p mode for obvious reasons, but having seen the results from the Z3 mounted on an Inspire, the quality is nothing to be sniffed at.

Other features include Timelapse with programmable camera movement, slow shutter for long stills exposures, and panoramic photos. A FlexiMic system allows good quality sound to be captured, too.

At $649 the Osmo+ would seem to represent very good value for the money. While it is aimed more at the enthusiast and lifestyle market, with the X5R it becomes a serious tool (with a more serious price as well). Although one question that owners of Inspire's with the new Z3 might ask, is why they can't mount that camera onto the new system?

That niggle aside, for a lightweight, versatile gimbal that you can take anywhere, it looks well worth investigating. Now, where's my waterproof version for mounting onto a boat?!

“The Osmo+ opens up entirely new capabilities for creators who love the Osmo’s ability to deliver crisp, sharp and detailed handheld imagery,” said Paul Pan, Senior Product Manager. “From action selfies to detailed panoramas to motion timelapses, the zoom features of the new Osmo+ once again expand the capabilities of handheld photography to push the limits of the imagination.”

The Osmo+ camera has a total of 7x zoom, with 3.5x optical and 2x digital lossless zoom (only available when shooting at 1080p), giving it a focal length ranging from 22mm to 77mm without sacrificing HD quality. It is similar to, but not interchangeable with, the new Zenmuse Z3 zoom camera recently launched for the Inspire 1 drone system.

Key Features Include:
Motion Timelapse - Osmo+ helps you record the passage of time easily. Just mark where you want the camera movement to start and end, and tap ‘Start’ to create moving timelapses without additional specialist equipment.
Advanced Stabilization - The Osmo+ builds on the advanced stabilization technology introduced with the Osmo to keep the camera flat no matter how you move it, whether you are live streaming or shooting your first film, and has been optimized for ultimate stability during stills capture.
Powerful Camera - Shoot crisp 4K/30fps video and 1080p/100fps for slow motion video, with enhanced sound capture through the included FlexiMic, or capture 12 megapixel stills in Adobe DNG RAW for more editing freedom.

The Osmo+ is compatible with the DJI GO app. Available mounts and extensions include a tripod, bike mount and an extension rod.

DJI is offering an extended, one-year warranty - OSMO Shield. The OSMO Shield doubles the DJI warranty period to two years after the purchase of a brand new Osmo. Provided under the warranty is unlimited maintenance (conditions apply) and one-time only accidental hardware damage coverage, including water damage. OSMO Shield is now available in mainland China and North America.