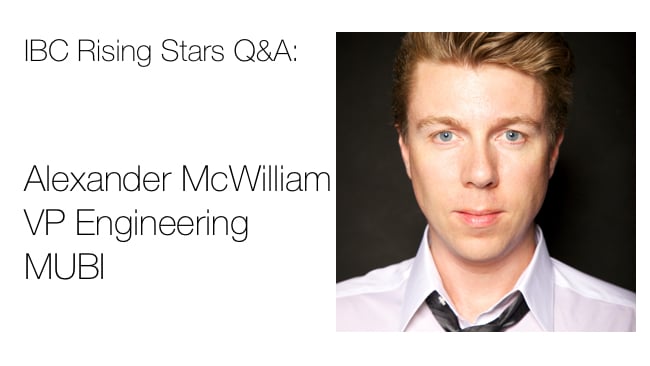 MUBI's Alexander McWilliam on a future dominated by robots and the importance of being both specialist and generalist in your future career/s.

A technologist and software product manager by profession, an ad man through education, a former programmer, a passionate strategist at heart and a nerd by nature, Alex specialised in online gaming communities in the 90s, content management systems in the 2000s and in video streaming services since 2008.

He was the lead architect of the Berlin Philharmonic's Digital Concert Hall since its inception and helped grow it into the largest global SVOD service in classical music. At MUBI — a curated online cinema available in over 200 countries — he is focused on building a world-class video streaming experience. Alex is a panellist at the Rising Stars session on New Skills for the Robot-dominated Future.

RedShark: A robot-dominated future sounds daunting, terrifying even. It won't be that bad will it?

AW: What is a robot? Is it a physical, possibly humanoid outright replacement for where a human once stood? Or is it a virtual, almost invisible "smartness" that improves our work and private lives in hundreds of small ways?

There's no arguing that some jobs will disappear, just as they did in the 200 years since the dawn of the industrial revolution. But for every job lost there is a new job that is created. Just not for the same person.

For the human race as a whole, I believe a world in which we never get lost, never have a car accident, get more accurate medical diagnoses and can understand the languages of our neighbours around the world is a great thing to look forward to.

What types of roles and skill might become redundant – and what opportunities might open up in a world governed by the internet of things?

As for the Internet of Things, so far all I've seen are widgets of convenience that free up more time for humans to consume content. Which is good for us :)

Are computer algorithms and automated machine processes useful in helping commission new content or in helping us to discover it?

I think companies like Amazon, Google, Facebook and Netflix have already convincingly demonstrated the business value of detecting trends and analysing behavioural patterns from the data that they collect.

But what about the value to the individual user? If these companies are so smart, how come I'm being emailed about products I already bought, being recommended films I don't have the time to watch and news articles that only confirm what I already believe?

I think Spotify and Apple have acknowledged that human curation is key to addressing the individual's needs and interests. And so has MUBI.

What can you learn today to be ready for a high-tech future?

New technologies crop up all the time but you're only at risk of being "left behind" when an entire younger generation of people have adopted it into their mainstream.

How did you get into the industry?

I didn't get into any one industry. I got into computers as a child and just kept following the white rabbit until I was given the opportunity to build the Berlin Philharmonic's Digital Concert Hall, the world's most successful classical music SVOD service. I joined MUBI one and half years ago and am responsible for the development of our website, all our apps and MUBI's custom private video content delivery network. (MubiCDN)

How can you bulletproof your career against dramatic changes?

Dramatic changes in the marketplace don't usually happen over night. But the closure of a single business that held on to old ways of doing things too long can. If you find your company or yourself retreating into a niche or compensating lost revenue by commanding a greater profit margin, then those are telltale signs that you're in trouble.

You're also putting your career at risk in the long term if you're married to a single industry or, worse, to a single technology stack. We all need to be both specialists and generalists at the same time.

How valuable is face to face communication over social media networking?

That depends on the topic of the conversation. If it's a sales rep then I'm fine handling that via email and/or Skype. If it's a designer or developer that I'm trying to creatively solve a problem with then nothing beats being together in the same room. The same goes for generic team management. Often what's not being said is as insightful as what is being said. But you won't pick up on that in a conference call.

What is your favourite film of all time and why?

I don't have a single favourite film. But I'll list just three: Drive, 2001 and A Single Man. All three are some of the most beautiful to look at and to listen to.

And finally, what is your advice to people looking to get into the industry?

Have a long, slow stroll through Hall 14 at IBC this year. That's where the real future is happening.