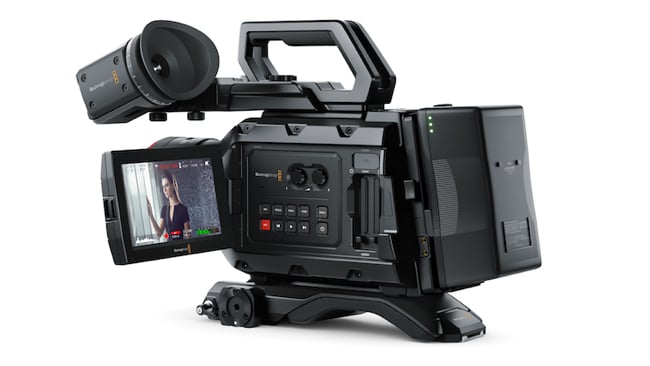 After the release of The URSA Mini 4.6K, Blackmagic Design has been hard at work, not only addressing concerns over some aspects of the image, but also the general usability of the camera. In what transpires to be a huge update by anyone’s standards, it has therefore just has released a public beta of the forthcoming Camera 4.0 Update.

[Ed - This is based on information just released. We are currently reviewing the software update and you'll see our article in these pages soon.]

The list of new features is extensive. Primarily it has created a new URSA Mini operating system, with an entirely new menu system, which has been designed with speed of operation in mind. This includes the ability to change iris, ISO, framerate, timecode options, off speed framerate favourites, and shutter angle directly from the heads up display, rather than having to delve into menus. The ability to adjust these settings can also now be assigned to the function buttons, too.

Flicker free shutter options are also now available, which is sure to please those who have to film under office based lighting or computer monitors. New white balance options such as fluorescent, mixed lighting, and overcast have also now been added.

One of the biggest additions to the new firmware is the ability to load third party 3D LUT files for on set monitoring. The camera can load these from the CFast cards, and can store six of them in the internal memory. One of these can be exported, too, so that the colourist has access to the same LUT used during shooting.

One of the drawbacks of some of the BMD cameras has been when it comes to outputting the footage to third party monitors or recording systems. The Camera 4.0 beta has tackled this with a huge amount of versatility, allowing LUT viewing, false colour, zebras, focus assist, frame guides, and other on screen information to be toggled on and off for each individual video output with the added option of a clean feed toggle for each feed as well.

The list of new features is extensive, and impressive, and go a long way to showing not only Blackmagic’s commitment to its gear, but that its cameras have reached a new level of maturity.

Check out the full specifications of the new update after the page break.

• Improved screen colorimetry for the built in LCD.
• Added ability to switch 3D LUT on and off for each output individually.
• Added ability to switch false color, zebras, focus assist, frame guides, grids and safe area guide on or off for each output individually.
• Added clean feed toggle for each output.
• Added program tally indicator for the built in LCD and Front SDI when using ATEM.
• Added monitoring option for tally, crosshairs and centre dot as part of grids.
• Added 14:9 frame guides.
• Added configurable safe area guides.
• Expanded options for focus assist to include red, green, blue, black and white as well as peaking.
• Added option for viewing codec and resolution setting instead of meters on the built in LCD.