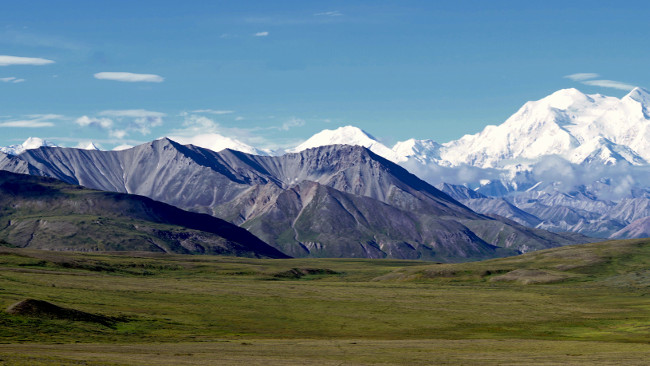 Crop of a Denali Panaorama

Ned Soltz threw a couple of Sony camera bodies, some lenses, and various GoPro kit into a bag when he headed off on an anniversary trip to Alaska with his wife to see if you can genuinely get the best of both worlds.

The challenge: is it possible to shoot serious stills and video, while at the same time enjoying our anniversary present to each other, a cruise to, and land tour of, Alaska.

The journey: flight from JFK to Seattle, overnight in Seattle, drive to Vancouver, overnight in Vancouver, board ship for seven day cruise with three stops and multiple excursions per stop, docking in Whittier and then beginning post cruise tour to Valdez via catamaran, Copper Center, bus ride across Denali Highway, nine hour Denali tour followed by three hour hike, bus to lodge on southern side of Denali with tour activity, train to Anchorage and one day drive to Seward. Red-eye from Anchorage to LAX with connection first to DFW and then back to LaGuardia. The duration: 18 days from departure to arrival.

The results were predictable. Wife not happy about the quantity of gear with constant taunting that she doesn't have to change lenses to take pictures with her iPhone. Wildlife photography was hit-and-miss. Can't wait for hours for a bear to come down to the river for salmon when the bus is about to leave. And even if I could get a cell signal, I suspect a dearth of Uber cars to pick me up. Video can be even harder with fellow tourists shoving to get a glimpse of the magnificent scenery, flora and fauna of that amazing state.

Surprisingly, with all of those balls to juggle, I was still able to shoot over 5300 still images and roll a couple of hours of video.

And the important part for my observations here is how all of those pieces come together.

I first realized that any video I shot would just be episodic and for scenery purposes. There was no room for audio gear and I attribute the longevity of my marriage in part to that fact that I've never asked my wife to carry a boom pole, mixer and cans while on an anniversary vacation. Even my Sony XLR-K2 module with the short shotgun would have been excessive. So, video had to be restricted to suction cupping a GoPro to boat or, in one case, an ATV driving through a remote trail following the obligatory Alaska "if you meet a bear or moose" briefing. Visible bear scat did answer the question about bears and woods.

The Sony a6300 and A7R II pair nicely together for stills, as well as for the limited video I did shoot with both cameras. While the a6300 shoots both Slog2 and Slog3, the A7R II shoots only Slog2. The solution to shooting Slog3 with the a6300 is to bring the footage into Sony Catalyst Browse or Prepare and applying a 1D LUT to bring the footage to Slog2 curve. The two then cut together quite well.

I actually preferred shooting video on the full-frame A7R II over the a6300, facts that I noted when I reviewed both cameras. The A7R II has 5-axis stabilization on the sensor, meaning that hand-holding the camera on a moving boat produced remarkably stable video. I had observed earlier that the A7R II is far less subject to rolling shutter and skew than the a6300, even in UHD mode. With its more advanced 425 AF points, the a6300 clearly focused faster and more accurately than the A7R II.

I shot the a6300 mostly with the FE 70-300 telephoto, which I had purchased immediately prior to the trip. In an outdoor setting primarily and with the speed of the a6300, I was not bothered by the relatively-slow variable aperture lens. Because the 70-300 is a full frame lens, when shooting on a Super35 camera such as the a6300, there is an effective FOV factor of about 1.5. When shooting distant wildlife, for example, setting the camera to JPEG allowed the use of Sony's ClearZoom 2x magnification. That gave me an effective focal length of 900mm. Combining that with fast shutter speeds (sometimes as fast as 1/2500 sec) and the lens' internal IS, I was easily shooting subjects a half mile away. And because of the 24 megapixel sensor in the a6300, there was enough resolution to zoom into subjects in Photoshop.

The 42 megapixel A7R II was intended to be the workhorse for money shots I hoped to achieve. I virtually always shot it with the 24-70 G Master lens and only occasionally did I use the 16-35 Sony/Zeiss. The 16-70 Sony/Zeiss went on the a6300 when I needed to travel light. I used the Rokinon 8mm only once, as setting up a good shot with it was too laborious.

Shooting video and shooting stills represent two very different skill sets. In shooting video, I'm either telling a story or trying to find ways to make a talking-head executive look good and sound convincing. Travel and nature photography require a combination of patience and the luck of the moment.

I could not be more pleased at how the two cameras paired with each other and complemented each other. I generally shot compressed RAW (the A7R II can shoot compressed or uncompressed RAW), while occasionally switching to Extra Fine quality JPEG. That was mostly when I wanted to use the ClearZoom feature, which is grayed out when camera is set for RAW. The versatile memory settings of both cameras allowed me to set up both a UHD 30p and HD 60p present, with all of my parameters stored.

The A7R II was flawless in every operational aspect. The images produced by the 24-70 G Master live up to Sony's claims.

Despite the challenges of acquiring serious stills or video on a vacation, I nonetheless captured some stunning landscapes and animal life, and will be working many weeks in Adobe Lightroom to catalog and color the stills.

Thanks to Sony for the loan of the A7R II, the 24-70 G Master and 16-35mm lenses. All other equipment I had previously purchased.

Certainly, the panoramic shot of a rare cloudless Mt. Denali makes the challenge a success.