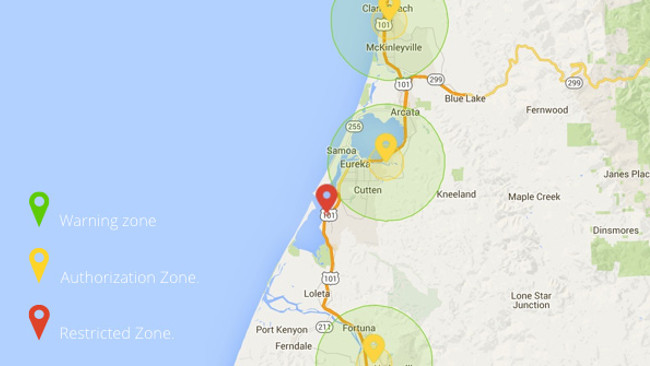 DJI's Geofencing system has been in the works for a good while now, but it is finally being rolled out in much improved form in the new update to the DJI GO App.

DJI GO is the official app for both iOS and Android, used to control DJI aircraft such as the Phantom and Inspire. The new update will mean that DJI aircraft, while using GO, will not allow flight in restricted airspace close to airports or military bases.

Some of these restrictions are hard-locked and some of them, such as what DJI term 'Warning Zones', simply flag-up a message alerting you that you are flying in an area that may require caution. There are also 'Authorisation Zones', which includes areas such as football stadiums and other landmarks. Operators with verified DJI accounts can temporarily unlock Authorisation Zones, for instance if flying for a commercial job is required.

The GEO system is controversial, with some commercial pilots becoming frustrated with the extra hoops that they may have to jump through. Especially when they class aircraft, such as the Inspire, as professional tools while systems, like the A3 used on self-build aircraft and the new Matrice 600, do not contain such limitations.

DJI was in an awkward position with this one, because while the Inspire and Phantom are being used extensively by professional operators worldwide, they are also used as hobbyist aircraft. With Geo, the company has trodden a fine line between making flight in restricted areas off-limits to hobbyists, while requiring a bit of extra effort from the professionals, should they need to fly in restricted airspace.

Yes, there is an extra hoop, but if it stops the average hobbyist with no safety training from endangering others or causing more sensational tabloid headlines, then personally I welcome it.

The new GEO system requires that pilots update to the latest aircraft firmware, found on DJI's support pages. One hopes that the anomalies being seen by some with the latest firmware (1.9) can be resolved quickly, and that mandatory updating will not be required until such issues have been resolved.

In addition, it is not clear whether the new GEO system affects other alternative control apps, such as the excellent Autopilot software.

July 5, 2016 – DJI, the world's leading maker of unmanned aerial vehicles, Tuesday introduced an improved version of its geofencing system in the latest update to the DJI GO app that controls its Phantom and Inspire aerial platforms.

"Safety is DJI's top priority, which is why we first introduced geofencing technology three years ago and have been steadily refining the industry's best technology to enhance aviation safety," said Brendan Schulman, DJI Vice President of Policy and Legal Affairs, who led the development of the new system. "Drone pilots want to fly safely, and our GEO system helps DJI customers fly responsibly while also enabling the full capabilities of remotely piloted aircraft."

GEO improves upon DJI's earlier No-Fly Zone technology by including permanent restrictions around prisons, nuclear power plants and other sensitive locations, as well as temporary restrictions for large stadium gatherings and national security events. It also introduces flexibility for drone pilots by giving them the ability to unlock some restricted areas where they have permission to operate.

The GEO system prevents flights from entering or launching in some zones, such as airports, unless a pilot with a verified DJI account temporarily unlocks it for a permissible use. This system prevents inadvertent flights in some areas while allowing them for beneficial uses such as sanctioned inspections, model aircraft activities, and indoor flight. Certain areas that raise national security concerns, such as Washington, D.C., cannot be unlocked.

The GEO system is available for iOS systems and Android in the latest update of the DJI GO app, and operates on all Inspire models as well as the Phantom 4, Phantom 3 Professional and Phantom 3 Advanced models. Pilots should update their app as well as the firmware for their controller and aircraft in order to take advantage of the system. It covers 17 countries with a population of 860 million people, including almost all of North America and western Europe, and will continue to expand to other regions around the globe.

Geofencing is a complex technology that provides an enhanced level of safety for airspace users. While safe flight is ultimately the responsibility of each pilot, geofencing aims to make compliance easier and more effective. DJI urges every drone pilot to act responsibly and follow applicable laws and regulations in their jurisdictions, just like the vast majority of millions of drone pilots around the world.

More information about DJI's geofencing system is available at http://www.dji.com/flysafe/geo-system.