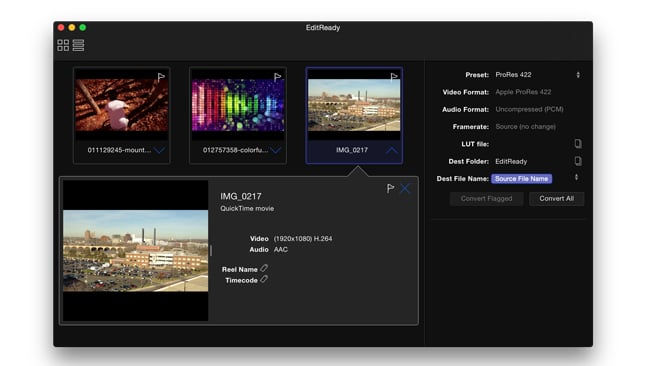 $49.99 could sort out many of your transcoding needs

Ned Soltz takes a look at Divergent’s EditReady, a transcoding tool that for $49.99 deserves a place in many people’s toolboxes.

Divergent Media has been around at least 10 years creating Mac applications for transcoding and evaluating footage.

Among its earliest products was ClipWrap, a utility still being sold, which rewrapped or transcoded footage in HDV and AVCHD (the dreaded .mts wrappers) into more compatible .mov wrappers or into ProRes or DNxHD codecs.

EditReady and ScopeBox constitute Divergent’s more up to date workflows.

In this review, I’ll take a look at EditReady to be followed by ScopeBox in a subsequent article.

There are a number of possible workflows to rewrap and transcode the myriad of formats that we encounter. Where shoots have used a menagerie of cameras, editors are confronted with a range of wrappers and codecs. And your choices dealing with this footage is either to rewrap/transcode or let your NLE deal with it.

We have already looked at other software solutions beyond the NLE including the Sony Catalyst Suite and the beta of the forthcoming Kyno. Other possibilities include Apple Compressor, Adobe Media Encoder, Episode, Squeeze, FFmpeg and other entries.

EditReady provides one of the simplest and fastest solutions to the mixed format dilemma.

EditReady presents the user with a drop and drag interface and can even find files within folders. It quickly recognizes those media files and lets you get right to work.

The program reads any MXF, MTS, M2T or MOV wrapped file. It does not decode CinemaDNG files. From the UI, select the clips to be manipulated, choose a codec or wrapper, select a destination and then let EditReady do its work. I have not personally done a speed comparison with other competing products; I just offer the observation that it is fast. Divergent Media does make speed claims on its website.

The current version of EditReady allows viewing and editing of Metadata including automatic file renaming. That edited Metadata obviously will export with the clip.

Another very useful feature is multiple batch creation. A useful workflow here is to create proxy files while also creating full-resolution files. This may be somewhat less useful for FCP X users where FCP X will create proxy files on ingest but certainly is useful for Adobe PremierePro users until Adobe releases the promised update which supports proxy creation at ingest.

The current version of EditReady can also link to ScopeBox via ScopeLink, which we’ll look at next.

At $49.99, EditReady incorporates key features which takes the heavy lifting out of transcoding to help smooth the edit process. It is an important tool in my toolbox and I enthusiastically recommend it.