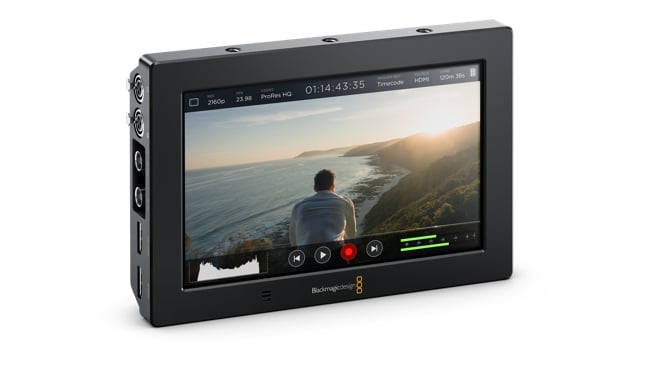 Simon Wyndham takes a close look at the $895 Blackmagic Video Assist 4K and finds a unit that still stacks up well, even against an increasingly capable competition.

Back when the original Video Assist was released it was pretty clear that a 4K version would most likely be in the works. Lo and behold, here we are a few months later and the 4K version has now arrived.

You might be asking yourself why there is a big fuss over the 4K version of the monitor. At first glance, it does simply look like a slightly bigger 4K version of the original Video Assist. However, there is a fair bit more to this version of the product than might be initially apparent. In fact, the additional features of the VA4K make it highly useful indeed, beyond that of a simple camera monitor.

First, the obvious. The 4K Video Assist is a 7" display, compared to 5" for the original monitor. I should at this point mention something that could confuse some users. The VA4K is not actually a 4K (or UHD, if you are finicky) display. It will record 4K footage and take a 4K signal, but the monitor itself is not physically displaying that resolution or, indeed, anything close. Its actual resolution is 1920x1200.

This does offer a slight advantage over the original Video Assist in that a full 16:9 image can be viewed without the top status bar obscuring the image.

Just like the first model, the 4K has HDMI in/out as well as a 6G SDI in/out. In addition, it incorporates two SD card slots. This, I think, is progress. The system can take new high speed UHS-II SDXC cards, making high quality 4K recording possible on relatively low cost media. Certainly, this would be very welcome on the BMD cameras themselves, but the Video Assist can, of course, be hooked up to those, if you were balking at the thought of paying for multiple CFast 2 cards for the URSA series, for instance.

Power is provided by dual Canon style LP-E6 batteries, which keeps the simplicity of the original. This type of battery is very easy to get hold of and I am glad that Blackmagic has kept this power system.

Lastly, the inclusion of dual mini XLR audio inputs is one of the most important improvements (for me, at least). Why are these such a big deal? Well, Blackmagic has gone out of its way to give the device some really good preamps and a very low noise floor. In short, what this means is that when the VA4K is paired with any BMD camera or, in fact, any other make of camera, you will be able to record exceptional quality audio without the need to attach yet more boxes to your rig.

Okay, I accept that, for many of the higher tiers of production, the audio will be recorded to a separate device, free from being tethered to the camera. But with the Video Assist 4K, the option is there to directly connect microphones and record very high quality audio without the worry of noisy in-camera audio circuits.

For BMD's own cameras, this feature alone allows two birds to be killed with one stone. Coupled with a Micro Cinema Camera or Micro Studio Camera, you are getting really good monitoring along with the audio issue being solved in one go. Because the Micro cameras have very good battery performance, they do not really require any additional battery solutions, thus the rig can be kept very simple. The only drawback to this is that you will need to keep the HDMI signal clean and free from onscreen information, so you will not be made aware of the cameras remaining battery time through its built-in power calculator.

The VA4K is very much the same as the 5" model during use, although, of course, the additional size and bulk makes it slightly less practical for mounting on smaller cameras. The interface is practically the same, save for the addition of an audio settings menu and the ability to deal with the dual SD card slots.

Just like the original model, simple single swipe gestures show or hide the menus and the onscreen information. It is all very intuitive and straightforward.

With regard to the audio settings, the audio source can be set for each channel input to come from either the video signal from the camera, XLR Mic or XLR Line. The XLR Mic option comes with the option of engaging Phantom Power, as well as a "Padding" setting, which drops the recording level slightly in noisy environments to give a bit more headroom. I am not quite sure why this needs to be done instead of simply reducing the recording level, however.

Audio recording levels are taken care of simply by tapping on the audio meters at the lower right of the screen, with simple touch sliders being displayed. It may well be possible to ride the levels in a static environment, but for a moving, active one, you would be better off recording two channels at different levels. Gone seem to be the days when we could ride the levels with a physical dial! The audio VU meters are extremely responsive with minimal lag, as well.

Brightness levels are also very good. You will never beat the power of the sun, but the Video Assist monitors are surprisingly easy to view outside in daylight. Clearly, the use of a monitor shade is the most intelligent option, though.

With Atomos bringing out its range of HDR display/recorders, can the Video Assist stay relevant? I think so. The Video Assist is, of course, much less expensive and records to very easy to get hold of media. HDR is not absolutely essential to view Log footage, even though it is nice to be able to do so. The Video Assist 4K at £645 (ex VAT) or $895 represents excellent value for money in comparison to competitors.

It is, like all BMD products, extremely solidly built. It is straightforward and unfussy to operate and it offers good brightness, even in outdoor scenarios. Power usage is pretty efficient, too. That superb audio circuitry must also be taken into account when making a purchasing decision. Of all the features I like about the VA4K, this is the one that really sells it to me. Just this alone saves me one heck of a lot of phaffing with devices such as Zoom or Tascam recorders. I can record my audio with the video file, with no need to mess around with separate audio files, and it cuts down the complexity of the rig, as well.

When all is said and done, you will need to weigh up your budget and decide whether you want the slightly extra future proofing of an HDR capable display, albeit a very early one, or whether you can eschew this in favour of something that is still very capable, but much more budget conscious. Personally, I'm liking what I'm seeing and I think that the VA4K represents a really good bang for the buck.