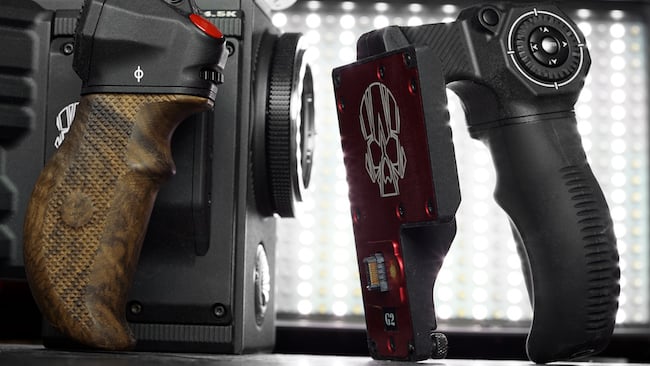 Getting a handle on things: the new RED side handle

A new firmware update for RED cameras brings Avid DNxHD and DNxHR to RED DSMC2 cameras in addition to the existing ProRes support. There's also a handful of new accessories for the form factor too.

The Avid DNXHD and DNxHR files are encoded in a MXF wrapper so they are edit ready: you can just import the files into your Avid workstation and you are good to go. The new codecs record simultaneously alongside the usual RED .r3d files so that you can get editing quickly by using the DNXHD files as proxies and then finish by matching back to the full quality .r3d files for the grade. It's a free firmware update so if you already have a DSMC2 camera you can try it out right now.

Speaking of editing, RED has made available a set of sample .r3d files from their various cameras which you can download for free from www.RED.com/sample-r3d-files.

This means you can try out the REDcode format in your existing workflow without even having a camera yourself. Try before you buy perhaps or just work out how to work with the files best if you edit for customers who do use the cameras. Perhaps iron out as many workflow bugs as you can before hiring a RED camera? A simple and smart move from RED to make it easier for everyone to work with their format.

RED has announced some new accessories for its new DSMC2 form factor too.

The new form factor used on cameras like the Scarlet-W and RED Raven takes modularity to a new level. RED has moved all the cable connectors off the camera body for the new form factor. This means that if a connector wears down then you only have to replace the damaged module and not the whole camera, so you can be back up and running a lot faster.

Many of the announcements from RED for NAB seem to be focused around making things smaller and lighter so that the new cameras can be used in aerial or gimbal type applications.

There is a new compact lithium battery with a standard V-Lock interface but designed specifically to work easily with the new DSMC2 form factor. It has a capacity of 47 watt hours. There is no release date on this yet as RED has to comply with various regulations because of the nature of Lithium batteries and currently isn’t sure how long that will take to sort out. 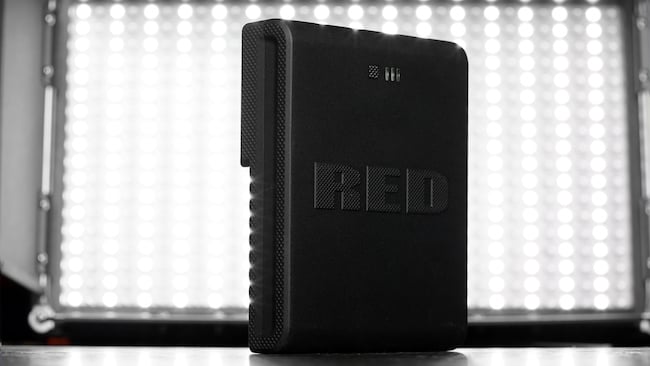 There’s also a new V-Lock battery interface. This takes standard V-Lock batteries but differs from earlier RED V-Lock adaptors in that in can be attached directly to the back of the camera body via a 13 pin pogo interface. So no expensive Lemo cables are needed which can get snagged or generally be in the way! This obviously makes for a more compact, low-profile form factor. The DSMC2 battery module also offers a P-Tap connector for powering other peripherals and accessories. The P-Tap connector supports a maximum current of 3.0 Amps. The battery module is priced at $595 and will be available in Autumn 2016. 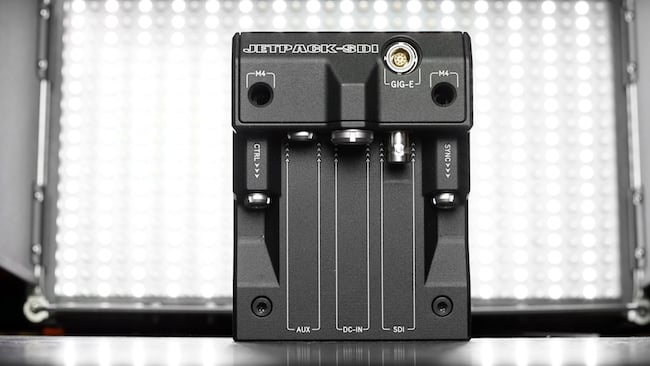 RED is also finally making available a much demanded SDI version of the jetpack which was previously available in a HDMI version. Not only does this give you an SDI connection for remote monitoring but also a Gigabit Ethernet connection over which you can send a video stream. There is a switch on the jetpack that allows the camera to boot automatically when power is provided on the DC-IN connector on the jetpack. Price for the new SDI jetpack is $1250 and is again going to be available in Autumn 2016.

Lastly there is a new DSMC2 camera side handle which was created with compact handheld shooting in mind. It attaches directly to the side of the camera brain and provides a number of controls over camera functions; not just a record button but also a front navigation wheel that can provide lens focus control and a side navigation wheel that can control the lens iris. There are four customizable camera parameter buttons that you can program to control things like white balance and there is a Rotary Wheel and D-Pad that allow you to control all the menu functions from the handle too. Basically there isn't much that you can't control directly from the handle.

It isn't just about the electronics, however, as even the handle is modular! The grip part of the camera handle is separate from the electronics and can be removed and replaced with custom versions. Apparently Element Technica are going to provide cool wooden versions of the handle. Maybe there will be a beautiful walnut handle, who knows. The new side handle will also be available in Autumn 2016 for $950.