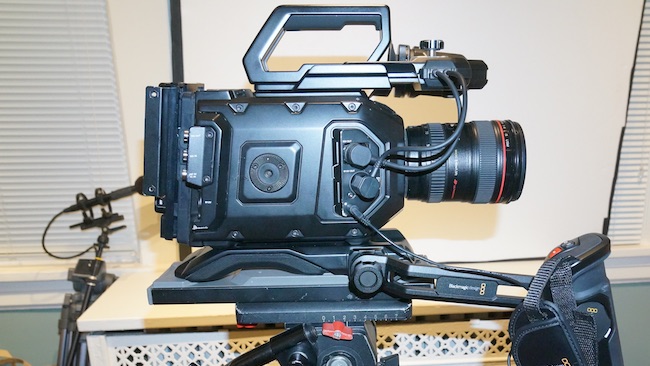 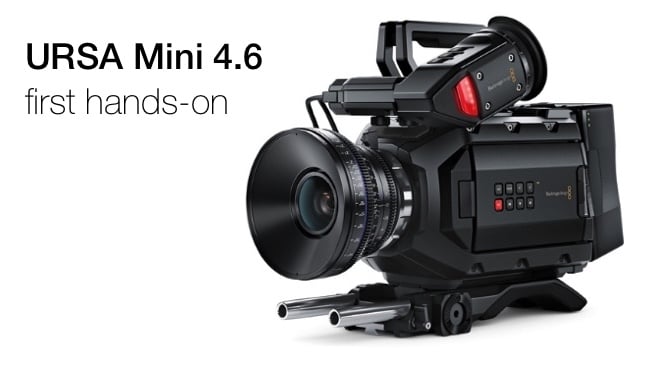 Now out and in the hands of users

Ned Soltz has been given one of the long-awaited Blackmagic URSA Mini 4.6Ks for a week-long evaluation. There's no footage to share just yet, but here are his first impressions. 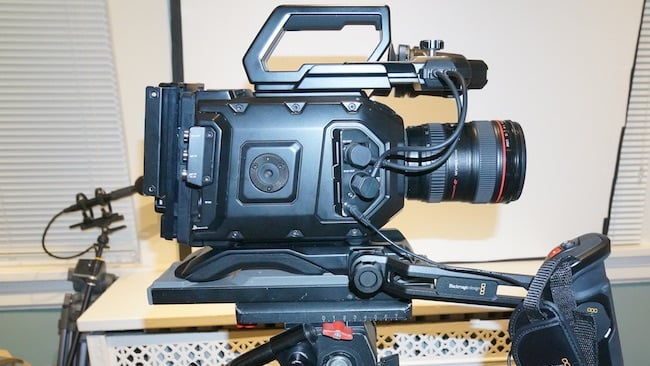 After unpacking the boxes, the first task was to attach the baseplate and configure the top handle and viewfinder. Blackmagic provided excellent directions, including the specifications of the screws so I could go right to my kit and get the right nib without trial and error.

Two sets of directions for attaching the top handle are provided, one for use with the BMD EVF and the other without. The EVF slides nicely into the top mount and BMD provides a thumbscrew which can be loosened to slide the EVF forward or backward. I found that the thumbscrew was not needed since the fit was tight—so tight in fact that adjusting the forward and backward direction of the EVF was difficult.

The EVF is a top notch piece. With its witness marks, repeating forward/backward or lateral positioning is easy. The diapoter is also calibrated and positions for different users can be noted. Then there is the image—crisp, sharp and a delight to view. The EVF connects to a forward SDI output and 12v output on the camera. There is no HDMI output.

A fully configured Ursa Mini 4.6K is heavy. The magnesium body is solid albeit with the typical Blackmagic machined look (lots of screws visible). After spending a few minutes adjusting the extension arm with handgrip mounted to it as well as the position of the shoulder pad, the camera was very nicely balanced on the shoulder. In fact, balance is good enough that the weight actually helped stabilize the camera.

I experimented today with a Canon 24-105 f/4 L series lens, which is an excellent match for the Ursa Mini.

The handgrip has LANC control and three buttons—focus, iris and record start stop.

If operating the camera handheld, there is no need to open the LCD screen on camera to access anything other than power switch. Like with all BMD cameras, the transport forward and reverse arrows adjust aperture of EF-mount lens and with muscle memory there should be no problems adjusting iris with camera on your shoulder.

The menu structure and control systems are the same as other BMD cameras. While one might argue that BMD does not provide as many control options as other manufacturers, I frankly was relieved not to be spending time menu diving.

First foray was outdoors shooting 3:1 RAW, following the workers installing solar panels on the neighbor’s roof. Not very exciting and I overexposed by at least 2 stops even with shooting ISO 200 (no NDs available at that time). I won’t even show you a single DNG from that test but will say that the camera had sufficient latitude that in DaVinci Resolve I was able to rescue a shot.

I promise some footage in the next instalment.

But, as for first impressions—the Ursa 4.6K Mini was worth the wait. I feel it will prove to be a camera with capabilities far beyond what one would expect for $5000.

More impressions to follow until the tearful farewell 7 days hence when it goes back on the FedEx truck. 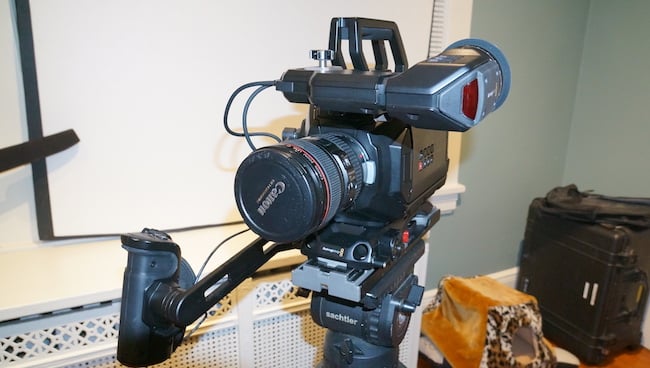