Sony's NAB 2016 strategy and beyond 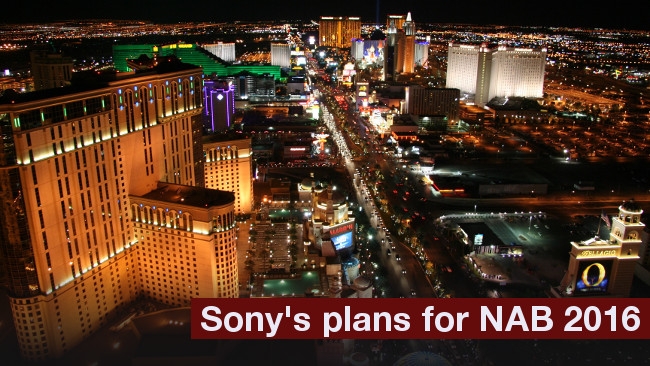 This report comes on the heels of Sony's opening of its new headquarters in New York, where we spoke to Sony execs that gave us a glimpse into their NAB (and post-NAB) strategy.

Sony showed off its new NYC headquarters, located in the historic New York Life Building at Madison Square Park, to a group of journalists this past week. In an annual pre-NAB gathering, Sony executives and product managers discussed the state of the company, the road map (both retracing their steps and to the future) and teased a few products.

Sony PSA (Professional Services of the Americas) will reorganize into strategic groups in the Broadcast, Sports and Production areas better to fit, in the words of John Studdert VP of Sales and Marketing, the model of a "boutique" company.

In that light, emphasis will be placed upon the maturation of 4K in acquisition and delivery, HDR, IP and protection of users' investment in Sony equipment.

To amplify upon that last statement, Sony will not introduce any new cameras in the Cine Alta line for 2016 and such favorites for production ranging from the X70 to the FS5 and FS7 will remain current models. At NAB, Sony will announce future enhancements and firmware updates for these lines, beyond the version 8 firmware previous announced for the F5/F55.

We covered the F5/55 updates in an earlier story, but to recap, version 8 adds a higher data rate codec, XAVC 480 and supports the new AXS-R7 dual-slot RAW recorder with 120 fps 4K acquisition. The firmware update, as always, will be free and no price has been announced for the AXS-R7 recorder or its media.

Other possible firmware updates remain under wraps, to be revealed at Sony's press conference on April 17.

In the Broadcast and Sports areas, Sony will emphasize scalability in products from HD to 4K, as well as paths to IP conversion.

Cloud storage and collaboration remains part of the mix, with Sony's Ci platform now targeted more toward enterprise users than to smaller shops, as was at platform introduction.

Crossover between the still image and video divisions is more apparent, as Sony touted its new line of full frame G Master E mount lenses, with the 24mm-70mm f/2.8 G Master zoom and the 85mm f/1.4 prime slated to ship the end of March. The 70mm-200mm f/2.8 G Master should ship in June. These lenses are suitable both for Sony's A7 series and A6300 cameras, in addition to the FS5 and FS7, which utilize Sony's E mount.

New features, up and down

What is apparent from looking at new product introductions is the migration of not just lenses, but even technologies from one product level to the next.

The Sony FS5 improves autofocus over its more costly FS7 stable-mate and adds Clear Image Zoom. The new Z150 ($3200) 4K camera utilizes a dual layer sensor in a 1" version, similar to the Super35 sensor in the a6300 mirrorless camera or the dual layer full frame sensor in the A7S II. One can only imagine going forward that successors to current cameras will share technologies up and down the line.

Sony clearly chooses to position itself moving forward along multiple tracks toward 4K and HDR production, leveraging the power of IP transmission and cloud storage.

Watch for all of Sony's announcements Sunday, April 17 at 2:00 PM PST.