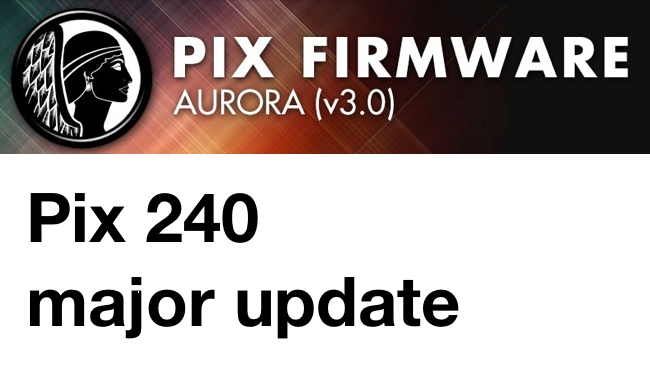 RGB or YCbCr 4:4:4 10 or 12 bit support, compatible with 4:4:4 1920x1080 signals from Sony F3, Canon C500 or Arri Alexa
ProRes 444 12 bit codec
3G SDI level A and B input and level A 3G SDI output (Pix240/240i only)
Menu option to switch SDI output between 4:2:2 and 3G 4:4:4
Menu option to display timecode as well as transport status via overlay on both SDI and HDMI outputs
Audio Delay increased to 500ms to compensate for processing delay between video and external audio signals

The update also fixes a notorious issue of artifacting of PsF to P conversions. Additional fixes includes timecode start/stop, default DF TC in absence of incomes timecode via SDI, and horizontal flip of display image flips only image and not the on screen display.

It is important to note with this firmware that 1080/60p recording is still not possible on the Pix since the data pipeline would require dual 3G SDI in for sufficient bandwidth.

Additionally, there has been no clarification from Sound Devices in their announcement whether existing qualified CF or SSD devices will support the 330 Mbps data rates of ProRes 4444.

The Aurora (v3.0) firmware represents a significant value-added feature to the Pix series of recorders for those scenarios where ProRes 4444 or 12-bit 4:4:4 recording would be appropriate. These could include episodic TV, theatrical, keying, extensive grading or multiple-generation recording applications. Users have also been asking for timecode output and concerns have been voiced over sync between video and external sources.

Sound Devices has addressed both existing concerns as well as feature requests with this firmware update.

The Aurora (v3.0) update is free for all Pix owners and may be downloaded here.