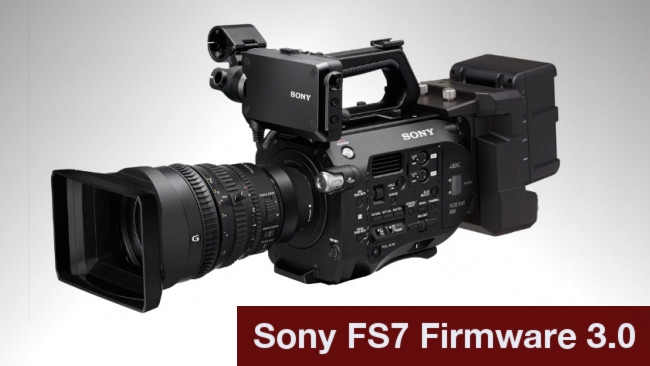 With its recent firmware update, the Sony FS7 now includes many features that should satisfy plenty of user demands.

Sony has released its long-awaited version 3.0 firmware update for the PXW-FS7 camera. First rumored to be released last fall, Sony had officially announced a late December 2015 release, but postponed that release reportedly for a last-minute fix of artifacting in RAW footage via the XDCA-FS7 back.

The RAW video quality issues have been fixed in this release, as well as another pesky annoyance that had plagued many users since the camera's release.

The various web forums were full of reports that shutter angle jumped to 300 degrees whenever shooting resolution was changed. This has been fixed in version 3.0 and shutter angle remains where it had last been set. I tested this to verify both in NTSC and PAL universes.

Another major user demand has been satisfied is that the Waveform Monitor may be displayed when monitor LUT is applied. Note that, for this to occur, SDI output must be enabled and output must be 2K or lower.

Sony also notes "improved operability of iris dial." My testing has shown that iris changes with Sony E mount lenses is much faster.

Menus do seem faster after the update and reboots between formats also seem faster than under previous firmware versions. This is probably a component of what Sony calls "improvement in overall stability and operability of the camera."

Focus magnification can still be toggled between 4x and 8x. But using the joystick on the control handle, it is possible to move the area of magnification. The viewfinder displays a box to indicate the position of the magnification relative to the whole frame. Definitely a boon for achieving critical focus of a specific area of the image.

The System -> Base Setting menu adds to Shooting Mode (CineEI or Custom) and Color Space a third option for Scan Mode. Users can switch between Normal, 2K Full and 2K Center. The 2K full option scales sensor to 2K resolution, while the 2K Center pulls a center crop of the sensor to result in 2x magnification factor. Note that while this may resemble the "clear scan" mode of the PXW-FS5 or the A7 mirrorless cameras, there is no zoom into this 2K Center crop. Sony also notes that the 2K Full and Center scan modes can only be used at resolutions of 2K or below.

The great usefulness of these 2K modes are the ability to use Super16 glass with the appropriate adapter, as well as 2/3" ENG lenses with a third-party E mount to Bayonet mount adapter.

The 2K Full and Center modes have long been available on the F5 and F55 cameras and FS7 users have demanded this capability since camera release.

With its curve favoring of highlight areas of the image, images shot in Slog3 tended to exhibit more noise than many users found palatable. Sony's recommended solutions included exposing the image properly (which can be difficult at first for new users not accustomed to shooting in LOG modes) and to apply a proper LUT which lowered shadow areas of the image. Noise Reduction was available in Custom Mode and it seemed at first that Sony resisted user requests to include it in CineEI mode. But Sony could only take the approach of 'proper exposure and grading' for so long. Users wanted NR in CineEI mode and, with version 3.0, the option is present. The camera defaults to NR OFF, but it can be switched on via the Menu or assigned to one of the assignable buttons.

I personally will continue to shoot with NR off, however, preferring to strive for good exposure and grade. Only if noise seems too apparent in the scene would I then apply NR in post.

But for those users who wanted it, you've now got it.

Even my venerable EX-1 gathering dust on the shelf has it. Now we can record Time Lapse in the FS7 and it is about time. Options include the time interval to record, as well as the number of frames to record at a time.

Zebra levels may now be set all the way to 0% giving a full range to those users who expose by zebras.

Sony has also announced that firmware version 3.1 will be available in March. That update is primarily to enable the new faster XQD M cards slated for release this spring. There is no word on whether any other fixes or features will be included.

PXW-FS7 firmware version 3.0 is a free update for all users and may be downloaded from the Sony Professional site in your respective Sony business region.