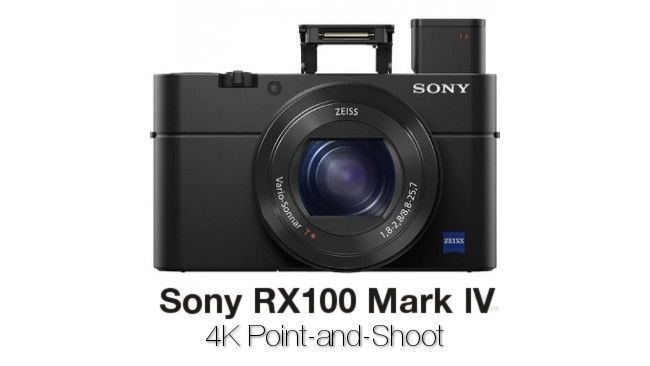 A look at Sony's compact 4K fixed lens shooter, which may mark a return to relevance for point-and-shoot cameras.

"Tomorrow's film will be an act of love." - Truffaut

In 1957, the great French New Wave icon, Francois Truffaut, declared that the future of film will be personal - that people will make confessionals and diaries, in the first person, about their lives and loves.

If only he had lived long enough to see YouTube.

You're reading this because you want to know stuff about the Sony RX100 Mark IV, and this is a camera review. I promise, I'll tell you interesting things about this camera and how it works. However, I also want to make an emotional appeal about why anyone would consider buying a $900 point-and-shoot in the era of the iPhone 6. Does anyone really need a point and shoot anymore?

A quick recap is that the RX100 Mark IV is a juice box sized camera with a 1 inch sensor and a 24mm to 70mm equivalent zoom lens. The lens is fast, going from an f/1.8 at the wide to an f/2.8 at the long end, flipping over somewhere in the 40mm range. You probably heard that it shoots slog2 4K video up to 30fps at 100Mbps (XAVC S) and it has a variety of incredibly interesting high frame rate shooting options in sub-UHD flavors. These things are all true; you get amazing looking video in all manners of frame rates from 24 to 960 in spatial flavors from 1080 to 4K. With the slog2 options, you'll squeeze something like 10-11 stops out of the Exmor sensor. It is said that this sensor is better than other sensors because it's backside is illuminated. I will have to take Sony's word for that.

As a stills camera, it has the remarkable distinction of having the fastest shutter on Earth, apparently. With a 1/32,000 shutter, you can shoot people in white t-shirts in the middle of the day on Mercury at f1.8 with shallow DoF. It shoots great images. Don't take my word for it, look at these incredible images made with the camera: Sony RX100 Mark IV Flickr Gallery.

It's a no-compromises cinema creation machine slightly larger than a pack of smokes, costing somewhere north of $850 USD, on-line. This is your hockey-mom/ soccer-dad camera, except it captures 4K with a cinema-range zoom lens and in ever-so-gradable Sony slog2.

When did consumers start demanding these features, and what does it mean for the future of nostalgia?

Memories of my childhood exist in 480i NTSC with dropouts (remember those?), bleeding colors, static and noise. The generation before me remembers childhood in grainy 8mm film. My son will review his childhood moments in 4K, most likely as ungraded Slog2, or at best, with some sloppy Rec. 709 LUT tossed on top, because I will never get around to grading that much footage. The future's past will look like dailies, but with amazingly well-preserved highlights and shadows.

Off-speed? My niece runs in slomo like she's in some trendy music video shot on a Phantom circa 2008. But she's not; she's just being captured with the camera's HFR option. It has a frickin' HFR option on the knob! When did consumers decide they need to record their lives at 900 frames a second?

'Mark' is Sony for "six months"

I know it's easy to be totally unimpressed with technology. We live in a world where phones talk back and computers cost five dollars. Camera manufacturers are plopping new versions of little hunks of metal, plastic and silicon off of assembly lines faster than you can say "FoxConn." My request is simple:

Let yourself be totally wowed by the entire history of filmmaking technology and technique: from color, to synchronized sound, to zoom lenses, to multiple frames rates, to DI and color grading - all exist, as features, in this tiny little camera. Plus, it syncs to your smartphone via WiFi.

There's No Reason it Should Do All This

Over the last decade, point-and-shoot camera feature sets evolved towards uselessness, with options like sepia-tone filters and incredibly low bit-rate video codecs. Camera Phones have forced point-and-shoots to become relevant or go extinct. The most popular camera in the world is the iPhone and it has been for a long while. Decent image sensors in camera phones, along with an ever-expanding app universe of shoot-edit-share tools, really destroyed the logic of owning a point-and-shoot. So the genera of device has been left to whither, as the great bifurcation between interchangeable lens cameras with large sensors and camera phones with massive utility, took over the environment. A camera like the Sony RX100 Mark IV represents a tremendous return to form for the point-and-shoot. It does the things an iPhone will never do, while also not cannibalizing Sony's mirrorless line-up.

This camera is so great and so weird. I shot a bunch of pictures and video on Christmas morning, did the inevitable "Dad staring at menus and saying, whoa!" which is now a holiday custom in my home.

I kept trying to touch-focus on the screen. I tried tapping gently, at first, graduating quickly to straight-up, pick-a-fight finger poking on the screen.

That's because the camera does not have a touch-screen focus system. Instead, it uses a multi-point autofocus and it takes a lot of getting used to after years of tapping things on my screen and seeing them pop into sharp view. You can tell the camera to hunt and focus on faces or on the eyes on peoples' faces and it does a pretty decent job of doing that, except when it doesn't. I wish I could just tap the screen.

4K is only five minutes long. I imagine this is a Sony mandated limitation to keep serious 4K filmmakers from buying a Mark IV instead of a A7s or FS7. Seriously, why does this exist? When will there be a hack for it?

It sucks batteries like a Mocha Frappuccino: you had no idea you could go through it so fast. So a second battery is a must and you can only charge the battery inside the camera, so buying a separate battery charger is also a must.

Apart from the dizzying amount of menus encrypted and arranged via the torturous Kafkaesque logic, perfected by the Sony Corporation, the RX100 MIV is the most amazing small form factor camera I've ever used. The incredible kinds of images I can capture, the range of motion pictures it's capable of recording, and the near invisibility of the form factor make this a camera just bubbling with potential, (with a few limitations) and something to love.