IP production is coming…and faster than you may think 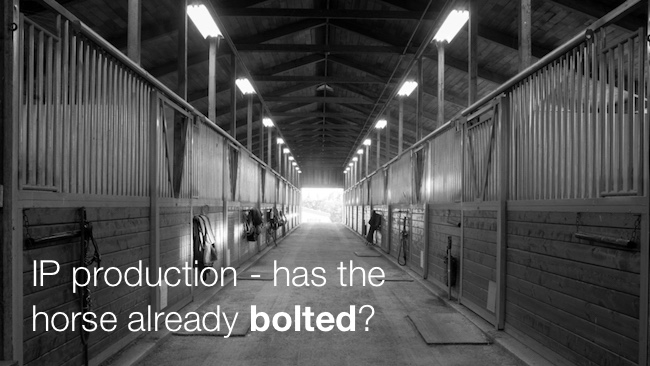 Is it too late to rein this one in?

An interesting week for the future of using IP production tools, with on one hand a powerful new manufacturer alliance forming and on the other a survey saying that implementation is already happening in the here and now.

First off, the new Alliance for IP Media Solutions (AIMS) includes some of the heaviest hitters in the industry, including Grass Valley, Imagine Communications (nee Harris) , Lawo and Snell Advanced Media (nee Quantel & Snell) — the companies that make precisely the so-called glue products that hold everything else together.

AIMS’ aim is to help get IP products into the market that offer “complete interoperability, are based on open standards, and integrate seamlessly into media workflow environments to foster industry innovation and efficiency.”

It’s a laudable goal and one that it plans to go about using a three-pronged approach of promoting open standards, developing solutions that support the open standards, and creating new open standards by supporting the various industry standards bodies that govern such things. You get the idea.

This, of course, is industry politics in action. Various companies are already making a play for becoming the de facto IP production standard, but AIMS members are very much wanting to be able to steer matters in their own direction. Ultimately, some form of standard will be reached, but it will take a certain amount of horse-trading, debate, discussion and manoeuvring behind the scenes before agreement is reached.

All of which will be underway while IP production is in the process of establishing itself as the new orthodoxy. As Rapid TV News details, a recent Futurescource Consulting survey suggests that while it may be 2025 before IP production becomes universal, a third of broadcasters are already using the technology for live production, a further 40% are beginning the transition, and the majority of major events (we’re talking Olympics sort of level) have already made the jump.

Hence the picture of the empty stables above. Industry organisations and standards bodies might be trying to corral the technology, but it is already running wild and free and possibly evolving new features and new capabilities as it does. It might be a horse that escaped the stables, it might be a dragon they try and put back inside.