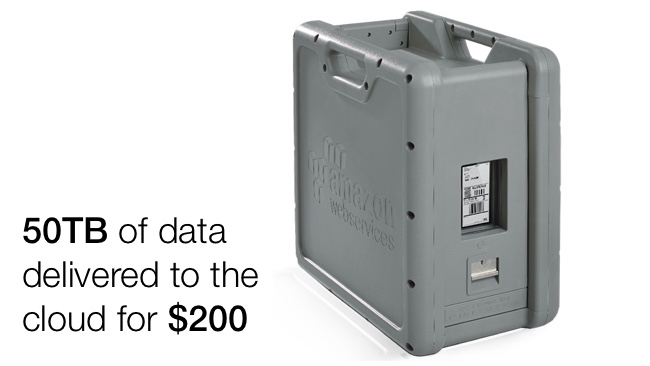 The AWS Snowball - self-contained and rugged

We had a strong response to our article asking how filmmakers can deal with growing amounts of data and it looks like Amazon Web Services has come up with an answer to at least part of the problem: physically carry it to the cloud.

The name of Amazon Web Services’ new service is Snowball, and it’s billed as a petabyte-scale data transport solution that uses secure appliances to transfer large amounts of data into and out of AWS.

It’s almost disarmingly simple. You create a job in an AWS Management Console, an extremely ruggedised 50TB Snowball drive is shipped out to you via UPS, you load your data onto it, a courier comes to pick it up, and your data is transferred to AWS S3 storage.

And even more simple than that is the pricing: a flat fee of $200.

Currently the service is only available in the US, but you can see its appeal. AWS reckons that it would take over 100 days to transfer over 100TB of data over a 100mb connection, whereas you could perform the same task with two 50TB Snowballs working in parallel in one week. In fact, AWS reckons Snowball becomes economically worth using for anything over 12TB of information.

The Snowballs themselves are built to withstand a 8.5G impact, are entirely self-contained with 110 Volt power and a 10GB network connection on the back (they are even their own shipping package), feature E Ink delivery screens, are weather resistant, tamper-proof, and weigh in at 47lbs (21kg), so they’re portable enough for most purposes.

The system uses 256-bit encryption and the company reckons that it can take as little as 13 hours to copy 50TB of data from your data source to a Snowball appliance via a 10 Gbps local connection assuming 80% network utilization (though you get to keep one on your premises for 10 days as part of the standard fee, so there’s no real hurry).

Exporting data back — which currently costs $0.03/GB to get it back out of Amazon S3 — is not yet supported via the technology, but will presumably be available in a fairly swift future release given the number of mentions of Import/Export Snowball strewn around the AWS website. They should be available a bit more geographically soon too, following the pattern of the other physically couriered services offered by the company such as AWS Import/Export Disk that also cover the EU with an Irish datacenter and Asia Pacific (Singapore).

It might be a case of using a sledgehammer to smash a nut for many smaller production companies, but we can see this getting a lot of interest from the production community, especially from movies and especially when AWS widens the distribution and starts to include a return path.

But no, you can’t buy one. “Snowballs are only available on a per job pay as you go basis, and are not available for purchase,” says the AWS website tersely.